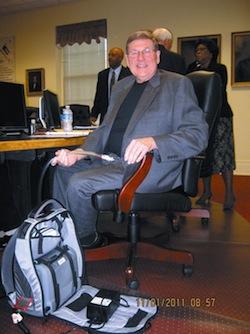 On Nov. 8, 2011, SynCardia Total Artificial Heart patient Jack Miller became the first politician in the United States to be elected to office without a human heart. On election day, he was able to man the polls and interact with voters using the Freedom portable driver to power his Total Artificial Heart. 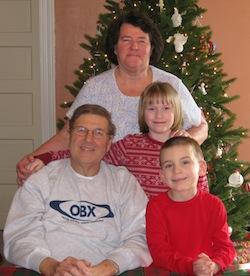 SynCardia Total Artificial Heart patient Jack Miller was able to enjoy Christmas at home last month with his wife Mary Lou and their grandchildren, 8-year-old Emma and 5-year-old Matthew, while waiting for a matching donor heart.

Jack Miller, 62, is probably the only politician in America who smiles when people call him “heartless.” Four months ago, doctors at Virginia Commonwealth University (VCU) Medical Center in Richmond removed his dying heart and replaced it with the SynCardia temporary Total Artificial Heart.

"Golly day, I feel so much better," Miller said, who received his Total Artificial Heart on Sept. 15, 2011. "It's like my body is reawakening for the first time in 11 years. I'm just amazed. No one will ever know how appreciative I am to be able to wait for my heart transplant at home in my community with my family.”

Less than a month after receiving the SynCardia product, Miller was discharged from the hospital using the Freedom portable driver to power his Total Artificial Heart. That same day, he and his wife Mary Lou celebrated their 44th wedding anniversary.

“He is the only boy I ever dated in high school, and I married him soon after we got out of school, and he is my life,” Mary Lou said. “I told one of the nurses one day, if something were to happen to him, you would lose a patient. But if something happens to him, for me, I lose everything.”

On Nov. 1, 2011, Miller was able to return to his position as chairman of the Middlesex County Board of Supervisors and conduct his first meeting with his Total Artificial Heart. Just a week later, Miller was up for re-election.

“I manned the polls on election day and interacted with the voters I represent,” Miller said, who was successfully re-elected to his fifth term in office. “We plugged the Freedom driver into my car’s cigarette lighter and it worked fine. During this whole process, my Freedom driver allowed me to accomplish my goals. It let the citizens know I was up and active and could continue to serve them.”

Miller was first diagnosed with dilated cardiomyopathy 11 years ago. Over the years, his heart continued to weaken, and eventually he was implanted with a defibrillator to shock his heart back into rhythm when it became erratic. After a bad episode of shocks from the defibrillator in September 2011, Mr. Miller’s heart was barely functioning. To save his life, doctors implanted the Total Artificial Heart to bridge him to a heart transplant.

Similar to a heart transplant, SynCardia's Total Artificial Heart replaces both failing heart ventricles and the four heart valves, eliminating the symptoms and source of end-stage biventricular failure. Unlike a donor heart, the Total Artificial Heart is immediately available at SynCardia Certified Centers and does not require expensive anti-rejection medication, which can cause subsequent complications. It is the only device that provides immediate, safe blood flow of up to 9.5 liters per minute through both ventricles. This high volume of safe blood flow helps speed the recovery of vital organs, helping make the patient a better transplant candidate.