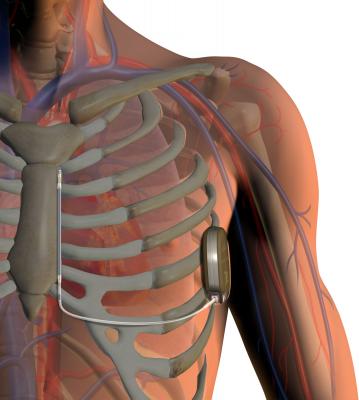 The Boston Scientific Emblem MRI-safe S-ICD system does not require a transvenous lead, leading to fewer complications with this type of ICD.

May 8, 2020 — A new clinical trial is the first to compare the safety and efficacy of subcutaneous implantable cardioverter defibrillators (S-ICDs) to transvenous implantable cardioverter-defibrillators (TV-ICD). The prospective, randomized trial is the first of its kind to show S-ICDs are as protective as TV-ICDs in the prevention of sudden cardiac death, but have a better safety profile, which highlights the device as an important treatment option for patients in need of an implantable cardioverter defibrillator (ICD) without pacing indication. Findings of the multicenter PRAETORIAN trial[1] were presented today as late-breaking clinical science as part of Heart Rhythm Society (HRS) 2020 Science, and will soon be published in The New England Journal of Medicine.

Cardiac implantable electrophysiological devices (CIEDs) such as ICDs, are a common treatment for cardiac arrhythmias and prevention of sudden cardiac arrest, with over 300,000 individuals receiving the therapy in the U.S. alone every year.[2] Device-related issues, including lead complications, are a known problem related to TV-ICDs. For this reason, S-ICDs were designed to offer an additional treatment option that can overcome lead-related complications. There are no randomized, controlled trials comparing the two therapies to-date. The PRAETORIAN trial was designed to demonstrate the non-inferiority of the S-ICD compared to the TV-ICD, with respect to acute and long-term device-related complications and inappropriate shocks.

The PRAETORIAN trial is an investigator-initiated, international, multicenter, randomized, noninferiority trial. A total of 849 patients with a class I or IIa indication for ICD therapy and without the need for pacing, were randomized and followed until a median of four years. Of the patients, 426 patients were assigned to receive an S-ICD and 423 were assigned to a TV-ICD, with similar baseline characteristics in the two groups. The baseline characteristics are comparable to those of other major ICD trials, thereby showing that the trial reflects a general ICD population. The trial population was 20 percent female, with a median age of 63 years (55- 70 years), and 69 percent had ischemic cardiomyopathy with a median left ventricular ejection fraction of 30 percent (25-35 percent).

Results of the PRAETORIAN trial show that in a general ICD-population, the subcutaneous ICD is non-inferior to the transvenous ICD with regards to major ICD-related adverse events with significantly less lead-related complications in patients treated with the S-ICD. The primary end point of the trial was a composite of device-related complications and inappropriate shocks during a median follow-up of 4 years, and an upper 95 percent confidence limit of 1.45 for the hazard ratio of the primary end point was used to test for noninferiority. Secondary end points included death from any cause (including sudden cardiac death) and appropriate ICD therapy. These findings indicate that S-ICDs should be considered in all patients in need of an ICD without pacing indication.

“Having this side by side comparison of the two ICD therapies in a general ICD population for the first time can help guide clinicians toward eliminating device-related complications for this large patient population,” said lead author, Reinoud E. Knops, M.D., Ph.D., Academisch Medisch Centrum in Amsterdam. “As we look to generate informed decision making throughout the defibrillator field, we hope our study will provide crucial insight and help equip physicians with new long-term insights to help inform ICD selection.

Since the rate of most lead-related complications of TV-ICDs occur after more than four years, patient cohort of the PRAETORIAN study will be followed for another four years. The authors of the study also note that future results could reflect S-ICD updates that help prevent inappropriate shocks that may have occurred in earlier stages of the trial.

VIDEO: How to Install a Subcutaneous ICD System

Emblem Subcutaneous ICD Safe and Effective for Majority of Patients