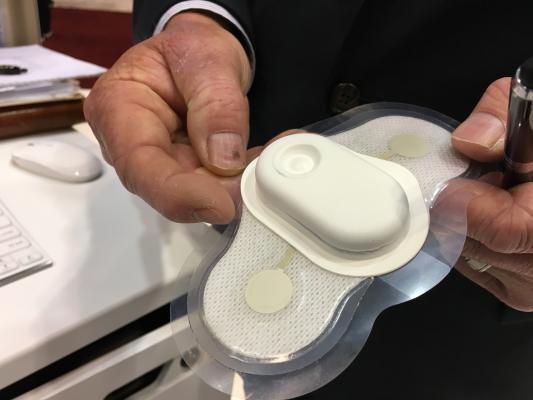 An example of the new generation of cardiac monitoring device that is replacing Holter monitoring is the Cardea Solo wearable sensor. The FDA-cleared device automatically analyzes data when the device is turned back into the physician's office and automatically produces a draft summary report. This technology can simplify the workflow by eliminating the need for third-party involvement.

Rapid advances in technology to monitor atrial fibrillation (AF or Afib) are enabling clinicians to access real-time patient data more easily and effectively than ever before.

The challenges of obtaining data through previous technology like Holter monitors have limited the clinician’s ability to better understand AF burden and its connection to increased stroke risk. As a result, studies have traditionally analyzed the outcomes of AF simply based on whether AF is present or not, according to the American Heart Association (AHA). [1]

With recent advances in wearable cardiac monitoring, however, physicians can better detect and quantify their patient’s AF burden.

When studies have analyzed the outcomes of AF burden, they typically classify AF type as paroxysmal or nonparoxysmal. However, as the AHA points out,[1] AF burden can be defined quantitatively, “by longest duration, number of AF episodes during a monitoring period, and the proportion of time an individual is in AF during a monitoring period (expressed as a percentage).”

Much remains unclear about how AF burden is linked to cardiovascular and neurological outcomes.

The Connection Between AF Burden and Increased Stroke Risk

Research has shown that higher AF burden is associated with a higher risk of stroke, according to the AHA. However, the correlation between AF and stroke risk is higher than previously thought, according to Robert Hauser, M.D., FACC, FHRS, senior consulting cardiologist at the Minneapolis Heart Institute, former president of the Heart Rhythm Society and chair of Cardiac Insight’s scientific advisory board.

“We used to think that AF was responsible for about 15 percent of strokes,” Hauser said. “It’s clearly much higher than that. I’m seeing numbers of 30 to 40 percent. That’s vital to know because the last thing anyone wants to have is a stroke. There needs to be increased awareness that AF can cause stroke.”

Current guidelines recommend assessing stroke risk based on a patient’s individual risk profile and not on AF burden, pattern or type. Whether increased stroke risk is directly proportional to AF burden or whether risk rises until a certain threshold of AF burden, is unclear, according to the AHA, and such a threshold has not yet been discovered.

What To Do Once AF Occurs

Longer term continuous ambulatory cardiac monitoring over the typical 48 hours is resulting in a rapid increase in the amount of data that can be used to assess AF burden.

“What to do with that information remains a looming question for patients who are asymptomatic and have short periods of AF,” said Albert Waldo, M.D., FACC, FHRS, The Walter H. Pritchard Professor of Cardiology, professor of medicine and professor of biomedical engineering at Case Western Reserve University School of Medicine and associate chief of cardiovascular medicine for academic affairs at University Hospitals Cleveland Medical Center.

These are patients whose AF would be first detected by wearable cardiac monitoring.

“The real issue is what do you do with the data when you have (that information)?” Waldo said. “What is the threshold of AF to prevent stroke?”

Cardiologists typically begin anticoagulation therapy when a patient at risk for stroke has AF. At present, recommendations for anticoagulation are identical regardless of AF burden or pattern, according to the AHA.[3] In addition to stroke, patient risk for systemic embolism is also of concern.

Some clinical trials have demonstrated that stroke risk is lower for patients with paroxysmal AF than those with persistent AF. However, so far, there is little consensus about what threshold of AF warrants therapy for patients whose AF is asymptomatic and of short duration.

One trial Waldo took part in originally found that six minutes of AF led to an increased risk of stroke. When the trial was later replicated, he said, the conclusion was that experiencing between six minutes and 24 hours of AF had the same impact as having no AF.

“The bottom line is there are almost no two trials that have come to the same conclusion about how much AF you need to recommend treatment,” Waldo said. “It’s a moving target, and nobody has a good idea.”

Given the lack of consensus about treating patients with AF burden, Waldo argues that treating every AF episode with anti-coagulation may unnecessarily expose patients to risk.

“All of us are concerned when we find AF no matter how short-lived it is. All of us want to protect our patients,” Waldo said. “But, if we start treating every little episode of AF with anti-coagulation when there’s no benefit to it, you just exposed the patient to potential risk. That’s the issue.”

As longer term continuous ambulatory cardiac monitoring can capture, analyze and report a more complete ECG waveform history, this can help clinicians learn more about the effects of AF burden. Hauser and Waldo emphasize the importance of using such technology to monitor other rhythms as well.

“It’s all a matter of getting the diagnosis when a patient comes in with symptoms,” Hauser said. “Yes, it may be AF but it may be some other arrhythmia.”

Gathering information about all rhythms, such as the onset of the arrhythmia, is important for diagnosis and treatment. There are numerous wearable ECG monitors available for long-term cardiac monitoring.

“If we have all the information, it makes the diagnosis of the rhythms easy and points to the treatment that’s very effective,” Waldo said. “That’s another important part of these new devices.”

This is part of a series of articles on the newer generation of ambulatory cardiac monitors, including: