Cardiologists, surgeons and other specialties collaborate to create a profitable interventional/endovascular program that goes beyond the coronaries 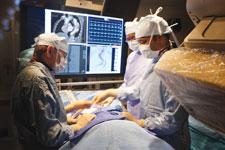 For endovascular aortic aneurysm repair procedures, Mercy Hospital uses a hybrid cath lab and a team composed of an interventional cardiologist and a vascular surgeon. 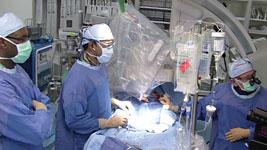 For endovascular aortic aneurysm repair procedures, Mercy Hospital uses a hybrid cath lab and a team composed of an interventional cardiologist and a vascular surgeon.

Cath lab volumes have gone down in recent years for several reasons, but one of the biggest reasons might be market saturation. This is certainly the case in Chicago, where nearly every hospital has a cath lab, resulting in relatively low volumes at most centers, despite the fact they are located in the largest city in the Midwest.

Cardiovascular Services at Mercy Hospital and Medical Center on Chicago’s South Side has differentiated itself through diversification, redeveloping its cardiac cath labs into a more collaborative interventional department serving numerous specialties. Mercy also renovated all its rooms into hybrid cath labs, bringing them up to the same standards as the operating rooms (ORs) in the surgical department.

“I was hired to turn around the program by being inclusive, instead of exclusive, of the various specialties,” said Paul Jones, M.D., FACC, FACP, chief of cardiovascular services. “We have done more than any other cath lab in the city and likely the state. It’s truly a comprehensive, multidisciplinary program involving interventional cardiology, interventional radiology, vascular surgery, neurology and gynecology. It is a comprehensive program encompassing several organs.”

In addition to cardiac procedures, interventional programs were created for peripheral artery disease (PAD), endovascular aortic aneurysm repair (EVAR), thoracic endovascular aortic repair (TEVAR), venous interventions and embolization procedures for gastro-intestinal bleeding, uterine fibroids and other solid organs. The cath lab staff also has expanded beyond the traditional role of coronaries, with interventional cardiologists learning new skill sets and performing many of the embolization procedures. Jones said the interventional cardiologists have been the primary advocates in creating the multifaceted program.

Mercy Hospital made it a mission to serve indigent populations with the same level of service, regardless of their ability to pay. For this reason, Mercy focused on its cath labs to deliver less expensive, minimally invasive treatments.

About a decade ago, Mercy implemented its endovascular aortic aneurysm repair (EVAR) program, utilizing the hybrid labs. The original idea was to bring minimally invasive EVAR and TEVAR treatments to lower income patients on the South Side. However, Jones said the hospital gained a good reputation for its EVAR program and has seen a steady cath lab volume growth of about 15 percent per year due to its low morbidity and mortality outcomes.

“Revenue has increased significantly for these procedures alone,” said Karen Walker, RN, MS administrative director, cardiovascular service line. “There has been a significant increase in patient volume over the last year by more than 50 percent.”

She said EVAR procedures helped reduce the costs of treating these patients surgically, which usually involves a couple of days in the hospital.

“Patients undergoing these procedures are discharged from the hospital within 23 hours, thereby reducing hospital costs and length of stay,” she explained.

Walker said the excellent outcomes for the program are related to the approach the hospital uses.  These patients are selected and procedures performed by both an interventional cardiologist and a vascular surgeon working collaboratively.

Jones said the hospital started with the EVAR program with a core endovascular team and then expanded out from there as volume grew, adding new types of procedures along the way.

Conventional wisdom is that hybrid rooms involving surgery should be located in the surgical department. However, there are many hospitals where the cath lab hosts the hybrid room, such as at Mercy. All procedures are performed in hybrid cath labs, which have been modified to meet surgical OR standards in terms of ventilation, gas hookups and infection control. “We had the same specs used in our cath labs as in our operating rooms,” Jones said.

He said the rooms were built at a cost of about $2 million each and were planned in collaboration with the various specialties using them. The primary focus of the rooms is to facilitate minimally invasive, interventional, catheter-based procedures, but they are capable of converting to open surgical procedures if necessary.

Mercy, with its mission to treat underserved populations, has been able to realize cost savings through the use of minimally invasive procedures rather than surgical approaches. Jones said this has reduced hospital costs by reducing length of stay.  The hospital has also partnered with device vendors to negotiate lower prices.

Procedurally, Jones said each physician approaches cases with fiscal responsibility in mind. This includes minimizing the use of intravascular ultrasound (IVUS) and fractional flow reserve (FFR). Jones feels only 15-20 percent of percutaneous coronary intervention (PCI) cases really require the use of FFR. He said there is also an effort to use the tools they have on hand and not to bring in new technology unless it has the ability to greatly improve patient care or reduce costs.

“You don’t necessarily need all those bells and whistles to care for patients,” Jones said. “You don’t need a new Cadillac when a nice Toyota Camry will still get you where you need to go.”

This is not to say Mercy does not use the latest technology. The hospital is involved in several clinical trials for aortic stent grafts and the IN.PACT trial for the Medtronic Admiral drug-eluting balloon, used to treat PAD.

“The trials are another way we are able to get these newer technologies to the front line,” Jones said. Many times trials are at larger hospitals that serve higher-income patients, whereas Mercy is the opposite of many trial sites, he said.

The success of the EVAR and other hybrid interventional programs is based on a clear focus and the ability to collaborate effectively with numerous specialties and leave egos at the door, Jones said. “You have to develop a model whereby the focus is on the needs of the patient and the program, rather than on individual doctors,” he said.

For more information about Mercy, visit its website at www.mercy-chicago.org/heart-vascular