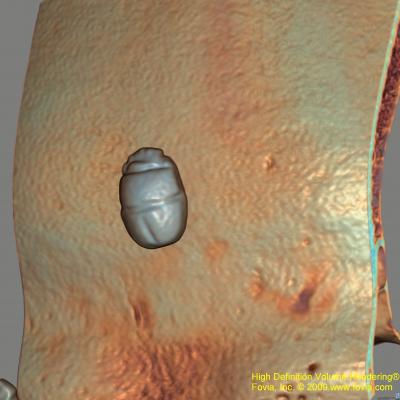 A scarab amulet on the forehead of the mummy. 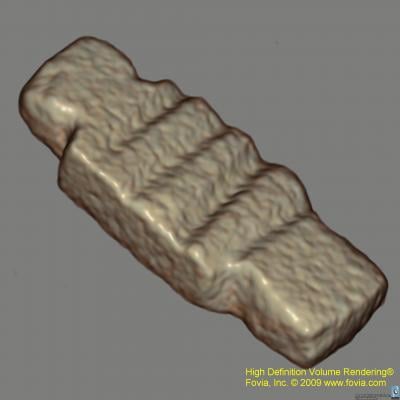 Amulet found on the mummy's spine. 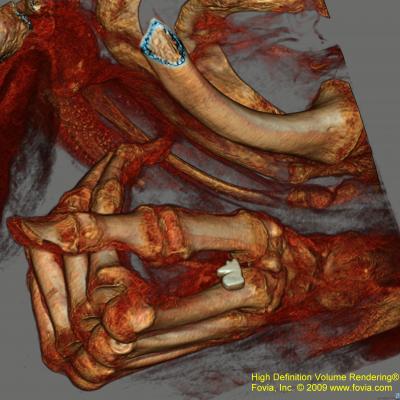 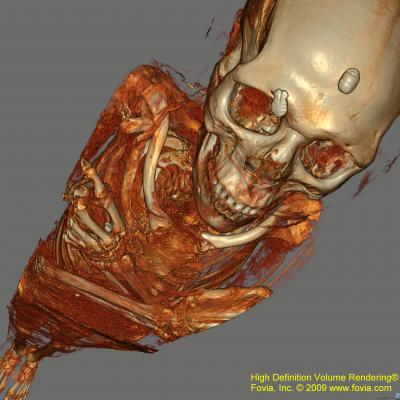 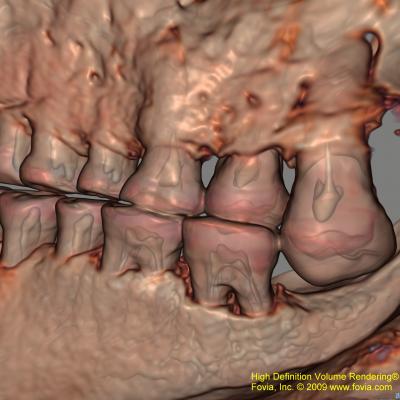 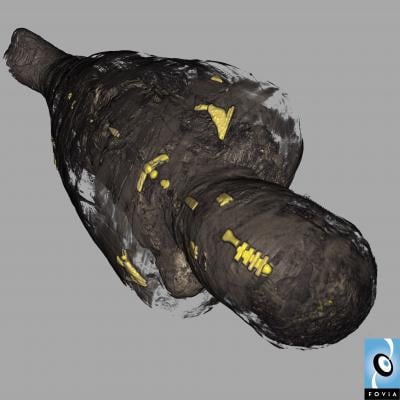 Mummy's inner wrappings shown with some of amulets that were imbedded in the layers.

February 23, 2012 — Computed tomography (CT) and advanced visualization software has allowed researchers to virtually unwrap a 2000-year-old mummy at the National Museums Scotland. Together with a team of radiologists and a forensic pathologist from Edinburgh University, a great deal has been learned about this female mummy, who died when she was in her mid-to-late twenties.

The mummy, known as the Rhind Mummy, was discovered by Alexander H. Rhind, a 24-year-old Scottish Egyptologist who brought her back to Scotland in 1857.  Rhind, a brilliant scholar known for his systematic work, left the contents untouched, which was unusual during the time of “Mummy Mania” when mummy unwrappings were common.  He was critical of so-called “archaeologists” whom he claimed indulged in little more than looting by unwrapping mummies, as it destroyed the carefully preserved relics.  Given his non-destructive philosophy, it’s likely that Rhind would have appreciated how scientists today, using high resolution CT scans and Fovia’s HDVR Connect software, have gained new forensic insights through the lens of advanced imaging technology.

“Having the chance to view the Rhind Mummy in three dimensions is amazing in its own right, but having the chance to view her with Fovia's software brings a new level of clarity and depth to the viewing experience, allowing for more accurate analysis and interpretation,” said Jim Tate, head of conservation and analytical research at National Museums Scotland.

He said Fovia creates a clear, 3-D view of the mummy, with intricate details down to the concealed ornamentation that has lain unseen for more than two millennia.  In fact, HDVR Connect helps reveal that some of the surface amulets have hidden.

The team discovered details about the mummy without having to unwrap the delicate bandages that preserved the body and hid many amulets.  They found a metal disc on her stomach, an amulet on her skull, and a scroll being clutched in her right hand – likely to be a funerary text that combines directions for mummification with guidance for the afterlife, and probably contains the mummy’s lineage and name.

Rhind wrote that the mummy was “a handsome specimen of the style of ornamenting externally, by means of inlaid or impressed emblems of gold and colored vitreous composition.” Now, with Fovia’s HDVR Connect software, scientists have learned how the body was prepared for eternity, including the locations and textures of the internal amulets as well as those that had been placed on her body during the intricate wrapping process.  Fovia’s fly-through movie virtually unwraps the mummy, providing a detailed and lifelike view of her in 3-D without being disruptive to the original embalming.

The Fascinating Mummies exhibit opened Feb. 11, 2012 at the National Museum of Scotland, and features Fovia’s 3-D fly-through movie of the Rhind Mummy next to the actual mummy. The exhibition examines death and afterlife in ancient Egypt and includes a spectacular array of Egyptian items from National Museums Scotland and Rijkesmuseum van Oudheden in Leiden, The Netherlands.