TAILOR-PCI trial reveals clinically meaningful reduction in adverse events in Post-PCI patients, but did not meet goal of study 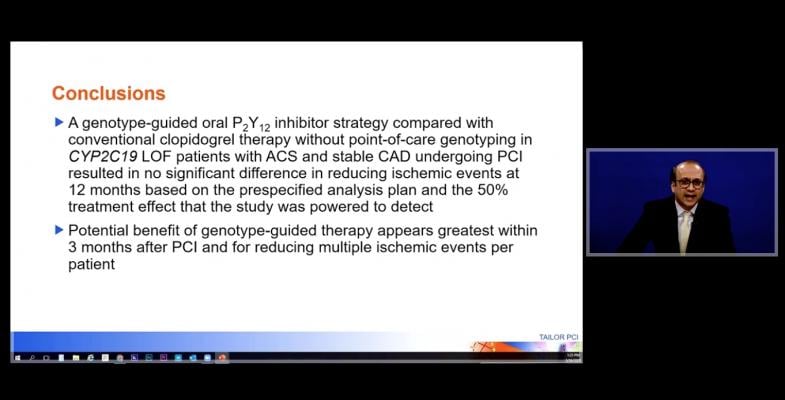 March 28, 2020 — The TAILOR-PCI trial that used genetic testing to guide which antiplatelet medication was given to patients following percutaneous coronary intervention (PCI) did not meet its primary endpoint of cutting in half the incidence of serious adverse cardiovascular events. This included heart attack and stroke, in the year following the procedure. However, researchers reported a 34 percent reduction in these adverse events at one year, as well as a significant reduction in the number of events per patient.

The data were presented today as a late-breaking study at the virtual American College of Cardiology (ACC) 2020 Scientific Session.

The TAILOR-PCI trial is the largest cardiology study to test the effectiveness of using genetic testing to guide treatment choice. The primary endpoint was to demonstrate a 50 percent reduction at one year in the combined rate of death, heart attack, stroke, stent thrombosis or a recurrent heart attack-like presentation. While the trial missed this mark, researchers did observed a 34 percent drop in these events in the year following PCI. The trial also revealed a statistically significant 40% reduction in the total number of events per patient receiving genetically guided treatment compared with patients who received standard treatment.

“Although these results fell short of the effect size that we predicted, they nevertheless provide a signal that offers support for the benefit of genetically guided therapy, with approximately one-third fewer adverse events in the patients who received genetically guided treatment compared with those who did not,” said Naveen L. Pereira, M.D., professor of medicine at the Mayo Clinic in Rochester, Minn., and co-principal investigator of the study.

Pereira added that a post hoc analysis, performed after the researchers knew the study’s results, found a nearly 80 percent reduction in the rate of adverse events in the first three months of treatment among patients who received genetically guided therapy compared with those who did not. This period immediately after PCI is when patients are at the highest risk for adverse events, he said.

“We now know from clinical practice and other studies that antiplatelet drug therapy is critical during the first three months after PCI,” he explained “This finding suggests that the lion’s share of the benefit of genetically guided therapy may occur during this high-risk period. Because this wasn’t a pre-planned analysis, we can’t draw firm conclusions from it, but it merits further study.”

Patients with arterial blockages who undergo PCI are commonly prescribed the antiplatelet medication clopidogrel, along with aspirin, for a year after the procedure to help prevent blood clots that can cause heart attack, stroke and other complications. However, studies have suggested that people who have a genetic variant in a liver enzyme known as – more – CYP2C19 are unable to fully metabolize clopidogrel, reducing the effectiveness of the medication and leaving them at increased risk of developing blood clots and serious adverse cardiovascular events. Such patients may be good candidates to receive alternative antiplatelet medication.

In the U.S., about 30 percent of people carry the genetic variant that makes them less capable of metabolizing and, hence, activating clopidogrel, Pereira said. The proportion increases to 50 percent among people of Asian heritage. A simple-to-perform genetic test can identify whether a patient carries the abnormality, Pereira said. However, no prospective clinical trials have shown that outcomes are better for patients who have the abnormality when the test is used to guide their treatment. For this reason, guidelines published by the ACC and the American Heart Association (AHA) do not currently recommend that patients be tested for the abnormality before being prescribed clopidogrel, Pereira said.

The TAILOR-PCI trial was designed to fill this knowledge gap. The trial enrolled 5,302 patients who had been treated for an arterial blockage with one or more stents. Their median age was 62 years, and 75 percent were men. Patients were randomly assigned either to a group that was tested for the genetic variant affecting clopidogrel metabolism or to a group that received standard treatment without genetic testing. In the first group, 35 percent of patients were found to have the genetic variant and were prescribed another antiplatelet medication, ticagrelor, while those without it got clopidogrel. In the second group, everyone was prescribed clopidogrel. Patients were enrolled at 40 medical centers in the U.S., Canada, Mexico and South Korea and followed for one year.

Among patients who carried the genetic variant, the primary endpoint occurred in 35 (4 percent) in the group that received genetically guided treatment, compared with 54 (5.9 percent) in the conventionally treated group at one year.

Pereira said that the reduction in the number of adverse events per patient also has important clinical implications. “Multiple adverse events represent a higher burden on the patient, so it is encouraging to see a significant reduction in cumulative events with genetically guided therapy,” he said.

Among patients with the genetic variant, there were no differences in the safety endpoint of TIMI major bleeding (fatal bleeding, bleeding in the brain or any bleeding that requires medical assessment or treatment) or minor bleeding between those receiving genetically guided treatment (16 patients, 1.9 percent) and those in the conventional treatment arm (14 patients, 1.6 percent) at one year. Pereira said that recent improvements in the standard of care following PCI may have contributed to the trial not achieving its primary endpoint.

When the TAILOR-PCI trial was designed in 2012, around 10 to 12 percent  of patients who received a stent could be expected to have a major adverse event, such as a heart attack, stroke or stent thrombosis, within a year. Over the course of the trial, the standard of care evolved through greater use of drug-coated stents and other treatments, which reduced the expected rate of adverse events in a year to about 5 percent. This change in technology substantially improved care for patients, but at the same time may have made it more difficult for the trial to reach its goal of a 50 percent reduction in adverse events with the number of patients enrolled, Pereira said.

No special expertise in laboratory testing is required to perform the genetic test, Pereira said. In the trial, the tests were done by study coordinators who did not have a background in laboratory medicine and who were able to perform the tests in a consistent, reproducible fashion after receiving brief training.

The next step, he said, will be to analyze the cost effectiveness of genetically guided therapy. The National Heart, Lung, and Blood Institute has also funded an extended follow-up study to evaluate the effect of genotype guidance beyond the 12-month follow-up period of TAILOR PCI.

This study was funded by the Mayo Clinic in collaboration with the National Heart, Lung, and Blood Institute. Spartan Bioscience, Inc, supplied the genetic tests used.