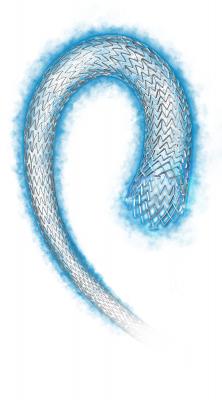 Results from the MAJESTIC trial were presented at the 37th Charing Cross International Symposium in London. The trial enrolled 57 patients across Europe, Australia and New Zealand with an average lesion length of 70.8 mm.

"I have not seen clinical data this impressive for a vascular stent that has to perform in an environment as challenging as the superficial femoral artery," said Prof. Stefan Muller-Hulsbeck, M.D., Ph.D., principal investigator and chairman, Vascular Center Diako Flensburg and head of the Department of Diagnostic and Interventional Radiology/Neuroradiology, Academic Hospitals Flensburg, Germany. "Because of forces created by knee flexion, there is an increased risk of restenosis, but we are seeing little evidence of this in the MAJESTIC trial."

Nine-month data from the MAJESTIC trial demonstrated the following:

The Eluvia Stent System is the first stent purpose-built for the superficial femoral artery (SFA) that utilizes a polymer and paclitaxel combination designed to facilitate a sustained drug release to reduce restenosis. The system is built on the Innova Stent System platform consisting of a self-expanding nitinol stent with a paclitaxel-eluting biostable polymer matrix loaded on an advanced, low-profile delivery system. The innovative stent architecture, designed specifically for the SFA, features a closed-cell design at each end of the stent for more predictable deployment, and an open-cell design along the stent body for improved flexibility, strength and fracture resistance. A triaxial delivery system is designed for added support and placement accuracy.

The Eluvia Stent System is pending CE Mark and is not available for use or sale in the United States.