February 20, 2015 — Pediatric cardiology researchers and clinicians from numerous centers around the world gathered at the Cardiology 2015: the 18th Annual Update on Pediatric and Congenital Cardiovascular Disease conference, Feb. 11-15 in Scottsdale, Ariz. sponsored by The Children’s Hospital of Philadelphia and Phoenix Children’s Hospital. Among the many scientists who presented research at the event, the conference organizers chose eight clinical researchers as finalists for the Outstanding Investigator Award. The following news briefs summarize their presentations of research in congenital heart disease (CHD):

Risk of White-Matter Injury Before Infant Cardiac Surgery Linked to Oxygen Flow in Brain
Recent research in infants with critical CHD has shown that a longer period between birth and surgery increases the risk of injury to the brain's white matter, a condition called periventricular leukomalacia (PVL). This study of 35 neonates with critical CHD at The Children's Hospital of Philadelphia analyzed cerebral physiology during the vulnerable preoperative period. The newborns had two-ventricle anatomy or single-ventricle anatomy, with or without arch obstruction. In all groups, cerebral tissue oxygen saturation decreased from time-of-birth until surgery. The findings suggest that the increased risk for PVL stems from oxygen demand and a natural increase in cerebral oxygen metabolism not being met by oxygen delivery. Therapeutic strategies to shorten the time to surgery, or to increase cerebral oxygen delivery or decrease cerebral oxygen demand, could mitigate the risk for PVL.

Practice Changes Reduce Radiation Exposure in Pediatric Cardiac Cath Procedures
This study analyzed practice changes in the pediatric cardiac catheterization laboratory at Children’s Mercy Hospital, aimed at reducing patient and provider exposure to ionizing radiation. After a 30-day trial and education period, the center implemented changes in technical and clinical practice such as weight-based reductions in preset fluoroscopy and angiography frame rates, more consistent use of collimators and shields, and increased use of stored fluoroscopy and virtual magnification. This quality improvement study analyzed all 353 cardiac catheterization procedures, 6 months before and 8 months after instituting the changes. The mean cumulative skin dose per minute of radiation decreased significantly, from 91.30 (plus or minus 166.23) cGy-cm2/min. to 58.42 (plus or minus 98.79) cGy-cm2/min. There were significant reductions across all age and weight subgroups. In addition, radiation exposure to physicians decreased by 46 percent from 2011 to 2012. 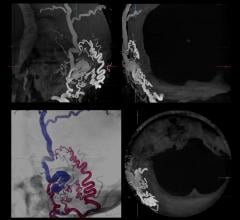 Videos | Angiography | February 08, 2019
VIDEO: Brain Arterial Venous Malformation Imaged on Angiography
This is an example of an arterial venous malformation (AVM) in the brain imaged on a ...
read more 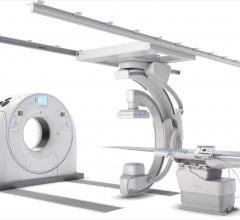