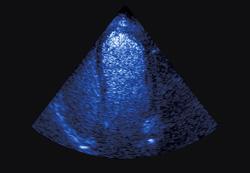 November 14, 2011 – The American Society of Echocardiography (ASE) reported that the Cardiovascular and Renal Drugs Advisory Committee and the Drug Safety and Risk Management Advisory Committee of the U.S. Food and Drug Administration (FDA) has recognized the value of contrast agents in echocardiography and made very positive revisions to the U.S. label for Definity, an ultrasound contrast agent produced by Lantheus Medical Imaging.

“The end of the monitoring requirements will markedly simplify the process from both the patient and laboratory perspective.  The withdrawal of monitoring and new safety data on pulmonary hypertension offers further comfort to those who were on the fence about contrast,” said Jonathan Lindner, M.D., FASE, professor of medicine and associate chief for education in the Cardiovascular Division at Oregon Health and Science University in Portland, Ore.

Contrast-enhanced ultrasound (CEUS) involves the injection of an intravenous contrast medium before performing traditional medical sonography. ASE has long supported the use of ultrasound contrast agents for cardiovascular imaging in clinical practice because they assist physicians in maximizing the accuracy of information obtained from echocardiograms, particularly in difficult-to-image patients, thus optimizing patient care. Contrast plays a role in patient safety by reducing unnecessary exposure to ionizing radiation, and is cost effective, as it reduces the need for more invasive procedures downstream and reduces the number of repeat tests. With the support of ASE representatives on their board, the Intersocietal Commission for the Accreditation of Echocardiography Laboratories (ICAEL) recognized the important role of contrast agents in improving the accuracy of echocardiograms by including it in their revised standards for the accreditation of U.S. echocardiography laboratories in December 2010. ASE and ICAEL are collaborating on a webcast educational session in February 2012 to explain these new requirements to ASE members.

At an FDA meeting about the safety of contrast agents in May 2011, Sanjiv Kaul, M.D., FASE, FACC, then-president of the ASE, was a guest speaker for the FDA and provided a presentation on the current cardiology applications of contrast echocardiography, citing multiple cases in which the administration of contrast led to diagnoses that would not otherwise have been reached. James D. Thomas, M.D., FASE, FACC, then president-elect of the Society, represented ASE and documented the clinical utility of ultrasound contrast agents for a number of indications beyond those approved by the FDA at the time, including stress echocardiography (for left ventricular opacification), vascular imaging and myocardial perfusion imaging. He noted that ASE believes that these agents have broad applications beyond those currently approved, and encourages manufacturers to perform clinical trials to seek FDA approval for additional applications.

The changes to the Definity label reflect the second FDA revision of warnings about contrast agents since boxed warnings were issued in 2007. More information about the relabeling is available on the Lantheus Website.  ASE commends Lantheus for their efforts in helping to clarify the safety and value of contrast as a diagnostic tool, and supports GE Healthcare’s efforts to seek similar label modifications for Optison, a contrast agent marketed by GE Healthcare. It is ASE’s understanding that GE will be submitting a label modification request later this year.