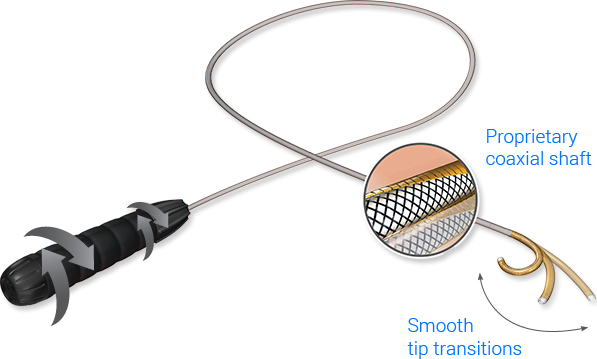 "During an ablation procedure, it is extremely important to have precise control over placement of the ablation catheter," said Karl-Heinz Kuck, M.D., Ph.D., director of cardiology at St. Georg Hospital in Hamburg, Germany. "Currently available sheaths have poor torque response, so accurate positioning can be difficult and time-consuming. A steerable sheath with 1:1 torque response provides better navigation and tip positioning, which allows me to create more precise, effective lesions."

AF is an irregular heartbeat caused by hypertension, heart disease and genetic predisposition and can result in symptoms such as shortness of breath, palpitations, confusion and weakness. If untreated, AF can result in a debilitating stroke. Newer approaches to treatment of AF include an endovascular approach using catheter-based ablation to interrupt pathways in the atria and prevent abnormal impulses from propagating. In 2012, there were 311,000 AF ablation procedures worldwide.

"The Vado steerable sheath addresses the existing shortcomings of currently available sheaths with its unique and patent-protected truVector technology that allows tip deflection without the use of pull wires. It's a simple yet innovative solution to creating a high-performance, uniquely torqueable steerable sheath," said Mike Dineen, president and CEO of Kalila Medical. "The current market for steerable sheaths in AF procedures exceeds $100 million and is growing at a rate of approximately 10 percent annually. We are pleased to move toward commercialization of the Vado sheath in this high growth market."

Limited European market release of the Vado Sheath commenced in the second quarter of 2014.