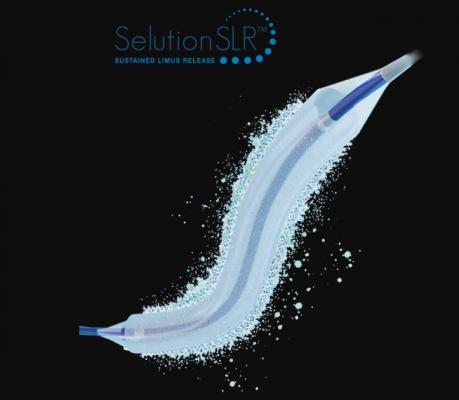 Excellent freedom from target lesion revascularization (TLR) was achieved through to two years in 87.5% of patients, with no primary TLR event observed after Month 11. These figures are low for a drug-eluting balloon First-in-Human study over this time period. There were no incidences of death or the need for minor and/or major amputations over this period. Improvements in Rutherford Classification, ABI and walking ability previously observed at one year were all maintained out to two years.

“These two-year results from the Selution SLR First-in-Human study are very encouraging," Zeller said. “They are the first two year data for a balloon eluting either a limus drug or sirolimus and are confirmation that a sustained limus release eluting balloon is both safe and effective in the treatment of SFA lesions over a prolonged period."

Use of Sirolimus vs. Paclitaxel in Drug-coated Balloons

Historically, paclitaxel has been the drug of choice for use in drug-coated balloons (DCBs). The drawback of limus drugs compared with paclitaxel in DCBs has been the difficulty in transfer—because limus drugs have a relative lack of lipophilicity compared with paclitaxel, they have lower bioavailability when only short-term tissue contact is provided. The MedAlliance Selution SLR is based on microreservoir balloon coating technology, which provides controlled and sustained sirolimus release with a therapeutic effect for over 60 days.

Selution’s technology involves unique MicroReservoirs made from biodegradable polymer intermixed with the anti-restenotic drug sirolimus. These provide controlled and sustained release of sirolimus. To date, extended release of sirolimus has only been demonstrated highly efficacious when delivered from stents. MedAlliance’s proprietary CAT (Cell Adherent Technology) coating enables the micro-reservoirs to be applied to balloons and adhered to the vessel lumen when delivered via an angioplasty balloon.

The study involved 50 patients enrolled across four German centers. Its objective has been to assess the safety and efficacy of Selution SLR in the treatment of lesions of the superficial femoral artery and/or the popliteal arteries, measured at multiple time points through clinical, duplex ultrasound and/or angiographic assessment (six-month time point only). The Selution SLR First-In-Human study was a prospective, controlled, multi-centre, open, single-arm clinical investigation. The primary endpoint of the study was angiographic late lumen loss (LLL) at six months. Secondary endpoints included major adverse events, primary patency, and angiographic binary restenosis. Primary endpoint data, first presented by Prof. Zeller at LINC in January 2018, demonstrated a LLL of 0.19 mm.

The SELUTION SFA trial met its primary endpoint and demonstrated an LLL of 0.19 mm. Excellent freedom from clinically driven TLR was achieved through 24 months in 87.5%, with no primary TLR event observed after month 11.

Clinical improvements were seen in Rutherford classification, ABI, and walking impairment at 6 months and were further improved to 12 months and maintained to 24 months. This initial first-in-human trial demonstrates that SELUTION SLR is a viable option to treat lesions in the SFA. It is the first demonstration of a sirolimus safety and efficacy in peripheral intervention.

MedAlliance said it anticipates receiving European CE mark market approval for the Selution SLR within the next few months.