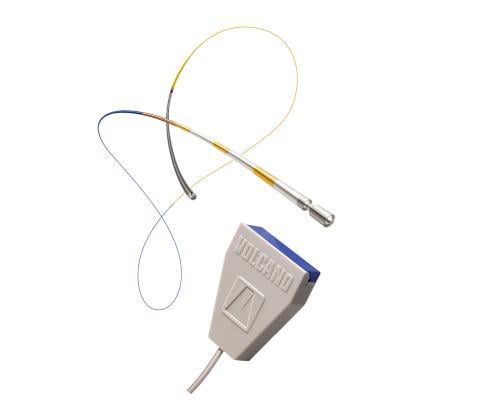 The iFR Modality is a physiologic measurement performed using the same pressure wires and equipment utilized in cath labs for fractional flow reserve (FFR), but avoids injection of hyperemic agents into the patient that induce stress to the heart. This allows for a meaningful, lesion-specific assessment in seconds by amplifying the resting pressure waveform. The iFR Modality is currently installed on more than 300 systems around the world, primarily in Europe and Japan. FDA clearance now means that more than 90 percent of Volcano's worldwide installed base of multi-modality systems can be upgraded.

"As cardiologists today we are concerned not only with the wellbeing of our patients, but also about the efficiency with which we deliver appropriate and individualized care for a very complex problem," commented Amir Lerman, M.D., co-principal investigator of ADVISE II and professor of medicine at the Mayo Clinic in Rochester, Minn. "Stents have proven beneficial when used selectively in patients that demonstrate a functional deficiency, and FFR is a terrific tool to identify the specific lesion causing the problem. iFR will further increase efficiency by reducing the time, cost and complexity required to properly identify lesions causing this functional deficiency, and then confirming the problem is resolved by the stent."

The iFR Modality is used most efficiently with Volcano's recently-introduced Verrata Pressure Guide Wire, which is designed for simple disconnection and reattachment during a procedure, and facilitates making quick measurements multiple times during a procedure without injecting hyperemic agents each time.

"In Europe, where we are now seeing how physicians use the two technologies alongside FFR, the feedback has been very positive. In the past, physicians would place the wire in the vessel, perform an FFR to 'justify' the need for intervention, and then return to the angiogram to 'guide' how many stents should be placed and where,” said Joe Burnett, executive vice president and general manager of the FM business at Volcano. “Adding the iFR Modality and Verrata to the picture, that same physician can now not only perform FFR to identify the vessel that needs treatment, but also can switch to iFR to quickly identify which lesion causes the largest drop in pressure, place a stent, and then re-connect to confirm that the stent helped reduce the pressure drop. This is a workflow that would be very uncommon with older wire technology and the need for multiple drug infusions. This helps to evolve physiology from a justification tool to a guidance tool."

The performance of the iFR Modality has been tested prospectively in approximately 800 patients as part of the ADVISE II (Adenosine Vasodilator Independent Stenosis Evaluation) study, which was presented as a late breaking clinical trial at TCT last fall. The iFR Hybrid Approach Analysis performed on the independently-held ADVISE II dataset was the first prospective, real world registry comparing iFR and FFR and it demonstrated a statistically high correlation (sensitivity 90.7 percent for FFR less than or equal to 0.8, specificity 96.2 percent for FFR greater than 0.8).  The hybrid method would have avoided the need to use a hyperemic agent in 65.1 percent of this patient population. Patients in ADVISE II were recruited from more than 40 centers in the United States and Europe, and all procedures were performed with operators blinded to the iFR values which were calculated offline at an independent core lab in Rotterdam, Netherlands.

"As physicians we routinely ask for tools that make these valuable measurements faster, easier and less expensive to put into practice," continued Lerman. "The fewer barriers there are to use, the more patients that will benefit from guidance tools that measure live physiology during a procedure. In an environment where cost, efficiency and personalized medicine workflows are endpoints of major clinical trials, the hybrid iFR/FFR workflow's 94 percent match with FFR and 65 percent patient reduction in the time and cost of a hyperemic drug infusion seem to address a couple very significant barriers and is worth pursuing. If iFR is enough to get non-users off the fence to embrace physiology, then this can only benefit patients by moving away from angiography alone."