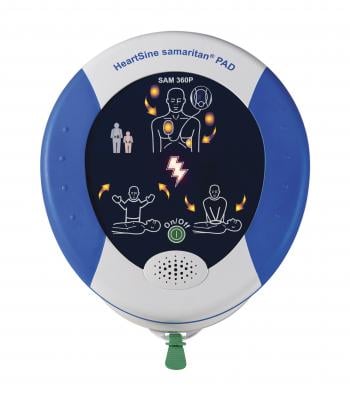 HeartSine, acquired by Physio-Control in 2015, is the first to receive approval for a new AED product under the FDA PMA regulatory process, which is the most stringent for medical devices in the United States and is a new FDA regulatory requirement for the AED industry.

The SAM 360P will complement the SAM 350P and SAM 450P, which also have FDA PMA and are offered in the United States, by providing users with a choice of a fully automatic device, a semi-automatic device and a device with integrated real-time cardiopulmonary resuscitation (CPR) rate feedback.

The Physio-Control HeartSine samaritan PAD 360P analyzes the cardiac rhythm and automatically delivers an electrical shock to a victim of sudden cardiac arrest in order to restore the heart to normal rhythm. This user-friendly AED provides easy-to-follow visual and audio prompts, including CPR coaching which verbally guides the rescuer through the CPR process. Shock delivery, if required, is fully automatic which means there is no shock button to press.

With a durability rating of IP56, HeartSine AEDs provide the highest level of dust and water ingress protection in the industry, according to Physio-Control. This makes the device well suited to a variety of usage locations – including places where exposure to the elements presents a challenge.

All Physio-Control HeartSine AED models use the company’s interchangeable Pad-Pak cartridge, which has also received PMA approval. With a single expiration date for both battery and electrodes, the expense of tracking and maintaining accessories with different expiration dates is eliminated. In addition, the Pad-Pak features a rapid replacement mechanism that enables the battery and pads to be replaced easily in seconds.

Along with the SAM 360P, Physio-Control will offer a new HeartSine samaritan PAD Trainer that simplifies CPR and AED training. The new samaritan PAD 360P Trainer guides users through simulated analyses, simulated energy delivery and prompted CPR intervals with a training device which looks like a SAM 360P, is cost-effective and does not deliver defibrillation shocks.