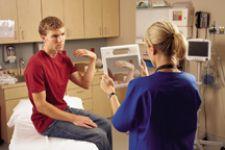 Tablet computers are becoming a trend in clinical mobile computing. The Motion Computing C5 tablet has a built-in bar-code reader and a camera to help with EMR documentation. 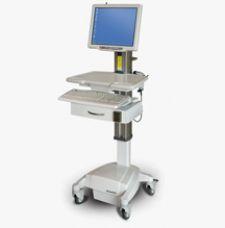 In addition to the key function mobile computing serves to enter real-time, bedside information into patients’ electronic medical records (EMRs), it helps reduce errors, improves patient safety and improves staff efficiency. However, when shopping for the components needed for mobile computing, sifting through the vast sea of information can be overwhelming.

This guide was prepared to help highlight some of the technology in an apples to apples comparison and to identify trends and considerations buyers should think about.

If a healthcare facility is in the market for mobile computing technology one of the best places to start is the annual Health Information Management Systems Society (HIMSS) conference. This year’s event in February in Orlando drew about 900 companies, many of which offer mobile computing products.

Socket Communications Inc. conducted an informal survey of healthcare professionals attending HIMSS 2008. In terms of IT spending, about 62 percent said improving patient care is their primary concern, and a third of respondents said bedside point of care was their primary IT initiative. The survey showed the majority, 65 percent, are considering buying laptops and computers on wheels (COWs) as the bulk of their IT spending in 2008. Hand-held computers represented more than a fifth of respondents at 21 percent.

The promise of EMRs is to eliminate paper, save time and money, eliminate redundancies, speed up patient care and increase patient safety. Mobile computing is the key.


The New Trend Toward Tablet PCs

About five years ago wireless computers mounted on carts (“computers on wheels” or COWs) came on the scene as the wave of the future to enter EMR data at the patient’s bedside. They also allow for additional equipment to be brought into patient rooms, such as bar-code scanning systems for medication management. COWs remain the standard for mobile computing in healthcare, but some hospitals are now opting for lighter-weight, smaller hand-held tablet PCs. The tablet PC allows clinicians to carry a computer that is about the size of a large book and weighs five pounds or less. It eliminates the need for a cart, which some nurses find hard to maneuver in small hospital rooms, create a physical barrier between the patient and clinician, or because they feel they are cumbersome to take on rounds.

At HIMSS 2008, clinical tablet PCs were highlighted in scores of booths. The Motion Computing C5, released in 2007, appeared to be the most popular. The company partnered with about 50 vendors who used the C5 as a platform to demonstrate their software or carts.

InfoLogix showed its Info Tablet 5000, which is designed for rougher usage. Panasonic, known for its Toughbook computer that can take a beating, offered the CF-19, which can operate like a traditional laptop computer, or its screen can be turned backward and folded against the keyboard to serve as a tablet PC. It is also rumored Panasonic is planning to release a true tablet PC version of its Toughbook computer later this year. Other tablets marketed for clinical mobile computing at HIMSS included the Fujitsu T4000, Tangent Thin Tablet 360 and Philips ProScribe.


Features to Think About

By their nature, all mobile computers will get bumped, shaken and possibly dropped while in service, so a computer needs to be durable enough to withstand shock. Motion Computing and Panasonic demonstrate their machines by dropping them on the floor and picking them up to show they are still operating. The ability to absorb shock is a serious consideration for both hand-held and cart-based computing.

“A lot of people think this is something that is up on wheels on a cart so they can put any computer on there, but the computers on carts do get bumped into walls and jarred when they go over transitions strips on the floor or elevators,” said Greg Davidson, senior business healthcare development manager for Panasonic.

In cart-based computing, Tangent offers shock- resistant mini-PCs, which look like a small black box designed to be bolted onto a cart, or even onto the back of the computer monitor to save space.

If a medical facility uses bar-code patient verification and drug administration, or plans to implement bar coding, mobile computers need to be able to accommodate the technology. Some of the tablet computers designed for clinical use already have the bar-code readers built into them.

Battery life is import if you need a computer to continuously operate during a shift without recharging. Cart-based computing can extend a computer’s battery time between recharges with the use of external rechargeable batteries built into the cart base.

Any computer seriously considered for adoption should be thoroughly tested prior to purchase by the staff members who will be using it. Some hospitals have adopted COWs and found they did not fit well into nurses’ workflow or fit the small-room architecture of the buildings and abandoned them. Frequently, what appears to be the best equipment may turn out to have ergonomic flaws, may be too bulky and unwieldy, or may not be as helpful as anticipated. Nurses will find work arounds to equipment they do not like or they feel makes them less efficient, or if it is not easy to use.

“People aren’t going to change unless you make it easy for them,” French said.

Customer satisfaction is another key point of purchasing a new computer that may be in service for several years. With more established manufacturers, buyers should ask what percentage of their business is to repeat customers. For example, Panasonic boasted at HIMSS 2008 that about 50 percent of its sales in recent years has been to repeat customers.
A greater emphasis has been placed on infection control, especially since the Centers for Medicare and Medicaid will no longer reimburse hospitals for expenses related to hospital-acquired infections starting this October. Some mobile computer manufacturers offer fanless computers to prevent the spread of airborne germs. Sealed cases, keyboards and screens are offered so they can be sprayed and wiped down with disinfectant. Some makers like Datalux also offer antibacterial silver-ion technology incorporated into the computers’ plastic components and keyboards.

Davidson said there is a growing trend toward using touchscreen computers for mobile computing, but warns their use is limited by the software being used. He said most EMR software currently requires keyboards.

He also said facilities need to keep in mind their end-users when purchasing, as doctors many times want a different type of computer than nurses. For this reason it may be necessary to purchase a combination of different hardware.