Clinicians say new, compact machines are easy to use at the bedside. 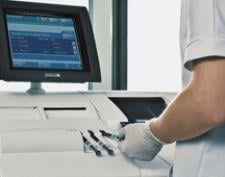 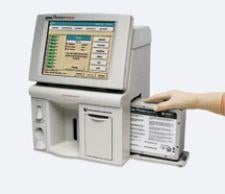 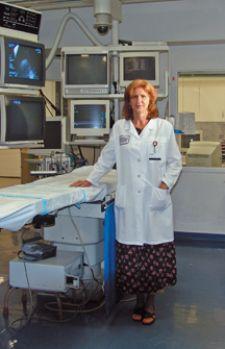 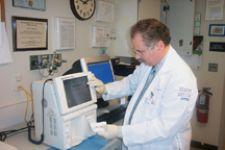 Having the most up-to-date blood gas readings is critical when dealing with many patients, especially pulmonary and cardiovascular ones. Equipment that allows a patient's levels to be checked on the spot by the caregiver is seen as an important technological advancement.
The measuring of a patient's oxygenation, electrolytes and metabolites, and glucose levels typically involves sending the sample to the lab for analysis. But in that time between taking the sample and waiting for the results, the patient's levels could change, says Tim Lynch, product manager for Instrumentation Laboratory.
“The benefit of using our product is that the [patient care team] can have results right there in front of the patient and act on them,” Lynch said, in reference to IL’s GEM Premier 3000 Analyzer, which produces test results in under two minutes instead of eight to 10.
The machine was originally designed for the cardiovascular OR and can be used at any time when needed — in emergency rooms, intensive care units and neonatal intensive care units.
The previous machines needed to be operated by licensed lab technicians — respiratory therapists and medical technologists — but the GEM Premier 3000 system is set up to be used by anesthesiologists and others on the patient care team.
Automated Quality Control
Bringing the technology to the point of care provides vital information needed for immediately addressing any changes in the patient's condition, said Alan Beder, manager of Scientific Affairs for RadiometerAmerica.
Radiometer produces the ABL800 Flex series and NPT7 blood gas analyzers. The former tends to be used more in high volume applications and can be found in the lab, while the NPT7 is more often used at the cath labs and point of care (POC).
Alexandra Martyniak, a technologist in the pediatric cath lab at the University of Chicago, has been using the NPT7 for about 18 months.
“Because it's in the room, it's easy to operate and it provides a quick turnaround time for results,” she said. “It is easy to use and reliable.”
She added that the reliability factor with the internal QC before each sample is a real plus.
One of the most important features of the technology is having automated quality control. Traditionally, QC required a manual running of several control products on a daily basis, performed at the end of every shift, or every eight hours. Those tests required a medical technologist or clinician to run them.
With both the GEM Premier 3000 and Radiometer's ABL800 Flex and NPT7, the technology is such that the QC system is continually monitoring all aspects of the analysis process.
If there is a problem with the machines, the automated QC system will prevent the machine from performing the analysis. If a machine fails a QC check, it will automatically move to the next cartridge, Beder said.
“Having equipment that prevents a bad result from being reported allows the caregiver to focus on the patient instead of wondering if the test is right,” he said.
Both the GEM Premier 3000 and the Radiometer series use automatic cartridge-based systems. The cartridges, described by Lynch as the size of a shoe box, can run for two to three weeks.
Lynn Pompa, supervisor of Respiratory Care and Pulmonary Diagnostics at Albert Einstein Medical Center in Philadelphia, is sold on the POC technology. Using the GEM Premier 3000 eliminates any second guessing about crucial patient measurements, he says.
Pompa manages a staff of 50 respiratory therapists and said the machine has improved efficiency and accuracy of patient care.
“Crucial treatment decisions are based on these analyzers,” Pompa stated in a release. “Equipment function must be reliable for detecting changes in patient condition, or the repercussions in quality of care can be significant. With GEM Premier 3000, we can count on results being accurate all of the time.”
The automated and consistent quality control system is a real bonus as well, Pompa said.
“With other analyzers, routine maintenance and QC disrupt therapists' normal routines and take away from direct patient care,” he said. “It's important to remember that QC issues also extend beyond the analytic process itself. By unburdening clinicians from daily system checks, iQM (GEM Premier's QC system) allows them time to focus on pre- and post-analytic issues such as clots, specimen contamination and proper patient identification.”
The reliability of and confidence in the iQM system is “always 100 percent” at the center, Pompa said.
“If you move something to the point of care, you shouldn't have to give up quality of performance. This machine meets the same performance as a lab machine,” Beder said.
All GEM Premier 3000 machines within a hospital can be integrated onto the same network so the lab can pull up the information online and access the status of all the analyzers in use.
With the POC systems, the laboratories and caregivers are working together to provide the best patient information, Beder said. It does not reduce the role of laboratory technicians or pathologists in the patient care process.
“There are options now,” Beder said. “In each case you have to look at what is the most efficient way to get the information needed to provide the best treatment for the patient.”