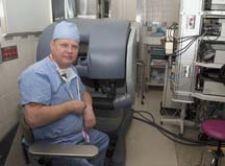 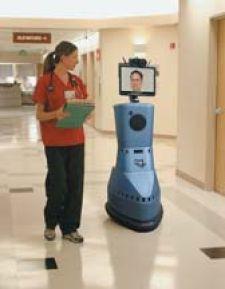 Minimally-invasive surgery has proven to be safer, requires a shorter hospital stay and is cosmetically preferred over conventional surgery because the incisions are much smaller.
But while procedures such as a laparoscopic cholecystectomy (gall bladder removal) have become commonplace since the 1980s, cardiothoracic surgeons have largely relied on traditional methods, not the least of which is cracking open a patient's chest in order to fully expose the heart.
That, however, is changing as more surgeons are beginning to see the benefits of using microsurgical instruments that are attached to highly maneuverable robotic arms.
As demand for these robotic systems increase, there are fewer options available. The dominant player in the field is Sunnyvale, CA-based Intuitive Surgical Inc., whose da Vinci Surgical System is now being used worldwide.

Mitral Valve Breakthroughs
One of the pioneers in the refinement of the da Vinci Surgical System is W. Randolph Chitwood, M.D., director of the East Carolina Heart Institute and professor of Surgery at the Brody School of Medicine, East Carolina University, Greenville, NC.
Dr. Chitwood recalls the skepticism he and other cardiac surgeons faced when they began to believe that minimally-invasive surgery could be used in heart surgery.
“People said you could take a gall bladder out but you'll never be able to attach small vessels. You need tactility,” Dr. Chitwood said.
But because the robotic system uses a miniature camera, which is inserted into the center incision of the three tiny ones made in the chest, he noted, “Eighty percent of your cues are visual, so you can develop a kind of visual tactility.”
Dr. Chitwood says by 1996 he was convinced certain procedures could be done endoscopically.
“We started redesigning instruments and showed we could do mitral valve repairs using 'chopstick' instruments,” he said.
“In about 1997, I presented our findings at a conference in Minnesota and was approached by an engineer from Intuitive Surgical,” he continued. “I went to California and worked with the prototype for a few days, then took the robot to Leipzig and did four cases there to show its efficacy.”
Back in the U.S., the FDA allowed the system to be tested on 10 patients, then approved a multicenter study involving five universities, he says.
In 2001, the da Vinci system received FDA approval. “Then we started training people,” Dr. Chitwood notes. “So far, we've trained over 300 surgeons worldwide.”
Training cardiothoracic surgeons on the system is not hard, he says, but they have to already have some experience. “If you're a good mitral valve surgeon, doing more than 50 a year, you can reach comfort level at 10 and expertise at 25.”
At East Carolina, Dr. Chitwood and his team have already performed over 270 mitral valve repairs using the system, he says.
To assist in the training of other surgeons, a second control console can be hooked up in a dual-control situation similar to the dual controls found in driving school automobiles, he says. Training could be made a lot easier, though, if there was a full-size simulator like those used by airline pilots.
Repairing the mitral valve, or “inflow valve” for the left ventricle of the heart, usually is required to treat regurgitation (leakage) or stenosis (narrowing) of the valve. Conventional methods entail performing a sternotomy (splitting of the breastbone) in order to gain entry into the chest cavity.
But the da Vinci system gives surgeons access to the heart through only three small (usually one to two cm) incisions. The system itself consists of two major components: the surgeon's viewing and control console and the surgical arm units that position and maneuver detachable and interchangeable surgical instruments. The pencil-sized instruments, which include computer-enhanced mechanical wrists, are designed to provide the dexterity of the surgeon's forearm and wrist at the surgical site.
Marc R. Katz, M.D., is a cardiothoracic surgeon with Cardiac & Thoracic Surgical Associates and at Henrico Doctors Hospital, which is located just outside Richmond, VA. He also was one of the surgeons whom Dr. Chitwood trained on the da Vinci system.
Dr. Katz says that patients who undergo cardiac surgery involving a sternotomy are usually in the hospital for five to seven days, versus two and a half days when the surgery is performed using the robotic system.
Lelan G. Siwek, M.D., a cardiothoracic surgeon with Northwest Heart & Lung Surgical Associates and at Sacred Heart Medical Center in Spokane, WA, says hospital stays are shorter and recovery times are faster because there's no bone to heal. “Most people can get back to work and physical activity, even sports, in as short a time as a couple of weeks.”
A da Vinci user for about four years, Dr. Siwek says in 2005 he performed 58 robotic procedures, of which 37 were mitral valve repairs. In the first three months of 2006 he's already performed 16 mitral valve repairs.

Robotics and Revascularization
But mitral valve repair is not the only procedure for which the da Vinci system is proving to be invaluable. Hybrid revascularization, the marriage of percutaneous intervention and robotic-assisted revascularization is developing into a solid treatment model for multivessel coronary artery disease.
This type of bypass surgery involves the detachment and then reattachment of the left internal mammary artery — a procedure that until recently was done only through open-chest surgery.
Dr. Siwek says that because this robotic-assisted procedure is still relatively new, his hospital is one of 12 trial sites in which the da Vinci system is being used.
On the other hand, the proven success of the da Vinci system in mitral valve repair has helped Sacred Heart Medical Center become a major West Coast training facility for cardiothoracic surgeons.
The systems aren't cheap, though. Dr. Chitwood says a complete da Vinci system costs over $1 million. But he adds: “I think we're on the cusp of a new horizon. With very few modifications, it can become a standard.”

Keeping Pace
Pacemakers have been around for decades and have been unquestionably effective in stabilizing the heartbeats of millions of people who go on to live normal, active lives. But a new procedure that uses a robotic surgical system to facilitate the connection of leads is gaining wider acceptance.
Called cardiac resynchronization therapy (CRT), or biventricular pacing, the procedure uses standard pacemaker technology but with a special third lead to sense and pace the left ventricle. This allows the pacemaker to provide outputs to both the left and right ventricles simultaneously in order to restore synchrony and allow the ventricles to pump more efficiently.
In the typical placement of a pacemaker using standard percutaneous methods, this third lead is placed via the coronary sinus into a vein on the back of the heart. By using a robotic surgical system, surgeons have been able to attach the third lead to the wall on the outside of the heart, thereby ensuring that the pacemaker is successfully implanted. However, it's been reported that 15 to 20 percent of the time this vein is inaccessible.
The first robotic-assisted surgery of this type performed in the U.S. was done at St. Luke's-Roosevelt Hospital Center in New York City using the da Vinci system.

Present Yet Distant
The operating room is not the only place where robotic technology is finding a home in hospitals. Mobile robots that serve as the eyes and ears of physicians are now being used extensively in emergency rooms, intensive care units and catheterization labs.
Andrew Schwartz, M.D., a cardiothoracic surgeon and chairman of the division of cardiothoracic surgery at Shawnee Mission Hospital in Overland Park, KS, says he uses such a robot for late-night rounds and to help him make a diagnosis when he's unable to be with the patient.
Dr. Schwartz originally had been using the RP-6 Remote Presence Robot developed by Santa Barbara, CA-based InTouch Health, but has since upgraded to the RP-7 model.
“The RP-7 has improved visibility so you can see the floor and where you're going at the same time,” he says. “I can also zoom in with a mouse and do not have to use a keyboard.”
Under the direct control of the physician, the RP-7 wireless robot can move anywhere untethered, allowing the physician to freely interact with patients, their families or other staff members. The built-in speakers, microphone, camera and viewing screen provide face-to-face interactions, even if the physician is miles away.
In addition, Dr. Schwartz noted, “The robot has a stethoscope attachment so I can listen to a patient's heart and lungs. The sound quality is so good, it's like being right at the bedside.”
Because the robot is controlled via its remote ControlStation, the physician has total control from anywhere in the hospital, office or home.
“I once got a call at 3 a.m. about a patient who had cardiac surgery the day before,” Dr. Schwartz recalled. “I drove the robot to the bedside and was able to see that the patient needed to go back into surgery. By the time I got to the hospital, the patient was prepped and the team was ready.”
Dr. Schwartz also says the robot has made rounding easier. “I round at night, about 10 p.m., so I am able to talk with patients and interact with the nursing staff,” he said, adding that using the robot for nightly rounds not only enhances patient care, “but it is enhancing my lifestyle.”
The mobility of the robot and its high-quality audio/video components has even turned it into a teaching tool, he says. “One surgeon actually brought the robot into the OR to watch an associate and to offer guidance.”
At a cost of about $155,000 for the robot and about $1,000 for the control console, this robotic system is affordable for most hospitals. Dr. Schwartz says Shawnee Mission Hospital now owns four — one of which is being used exclusively in the ICU.
And they have become part of the hospital's expansion plans, he says. “We're planning to build a second hospital, so we can link the two with these robots.”
Rich Rogoski is a free-lance reporter who can be reached at: [email protected] 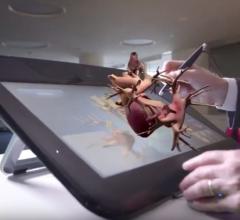 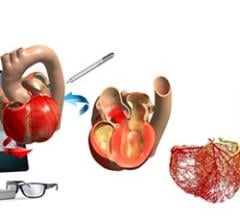 Stereoscopic view with a heart viewer. Image courtesy of Fujitsu. 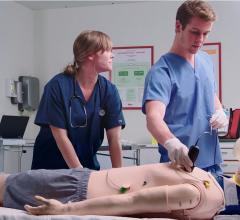 The Laerdal-SonoSim Ultrasound Solution for SimMan3G and SimMom brings ultrasound training to life with computerized mannequins that can breathe, blink, and bleed just like humans, bridging classroom learning and real-life clinical experience without putting actual patients at risk.