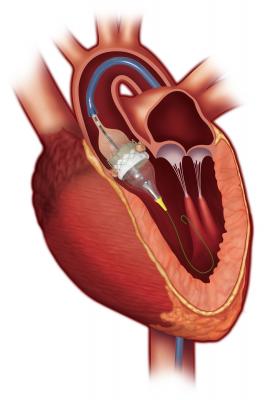 “TAVR and surgery were similar for the primary endpoints of mortality and disabling stroke. TAVR is a very viable alternative to surgery for intermediate risk patients,” said Craig Smith, M.D., chair, Department of Surgery, surgeon-in-chief, NewYork-Presbyterian Hospital/Columbia University Medical Center, who presented the data at ACC.

Data from this non-inferiority trial — the first to evaluate TAVR in patients who are considered intermediate-risk — suggests TAVR is at least as safe and effective as surgery in these patients. Overall, the primary endpoint of all-cause death and disabling strokes was comparable at two years — 19.3 percent for TAVR and 21.1 percent for surgery. Among TAVR patients with transfemoral placement of the valve the combined rate of death and disabling stroke was lower, 16.8 for TAVR, compared with 20.4 percent for surgery (p-value=0.05

“For the past five years, TAVR has been growing in use and acceptance largely based upon clinical evidence from multiple randomized controlled trials, but these have been limited to patients at the highest risk for surgery,” said Martin B. Leon, M.D., professor of medicine and director of the Center for Interventional Vascular Therapy at Columbia University Medical Center-New York Presbyterian Hospital and co-principal investigator of the PARTNER trials. “Here, we demonstrate outcomes related to death and stroke, which are equivalent in these patients and may be superior in the transfemoral group.”

In this randomized controlled PARTNER 2A trial, outcomes using the Sapien XT valve were compared with open-heart surgery valve replacement among 2,032 intermediate-risk patients treated between December 2011 and November 2013 at 57 sites, all but two in the United States. Patients were randomly assigned; 1,011 to TAVR and 1,021 to surgery. Of those in the TAVR group, 76 percent underwent transfemoral placement, and the rest had transapical, transthoracic placement in which the new valve is implanted through a cut in the chest wall and the apex of the heart. ). Transapical valve implants did not perform as well than femoral.

“When we compare transthoracic TAVR patients to those having surgery, they are about the same, so whatever benefit achieved related to lower rates of death and strokes was clearly in the transfemoral group,” Leon said.

Researchers also found significant differences in secondary clinical endpoints looking at time in the hospital, valve function and major complications, some favoring TAVR, some surgery. For example, TAVR patients spent less time in the hospital overall — the average time in the intensive care unit (ICU) was two days with TAVR versus four days with surgery, and the average hospitalization for TAVR was six days compared to nine days with surgery. TAVR also appeared to improve the aortic valve areas more than surgery, meaning that the quality of the valve’s performance was better as measured by echocardiography during follow-up points through two years.

Compared to surgery, TAVR also yielded significantly lower rates of acute kidney injury, severe bleeding events and new onset atrial fibrillation, a heart rhythm problem that is a common complication of open procedures. The surgery group, on the other hand, had fewer major vascular complications and leakage around the valve (paravalvular regurgitation).

“The two-year follow-up allows enough time to accurately assess the relative performance of these two valve replacement therapies,” Leon said, adding that he suspects these findings will potentially affect clinical guidelines for TAVR in the future. “We know surgery is good, but it is still a major procedure and for many patients, a less-invasive approach may be the preferred alternative. As we continue to evolve the procedure and technology, it’s important to know whether TAVR is an effective alternative in these lower-risk patients.”

What to Tell Patients

Smith said intermediate patients with aortic valve disease are aware of TAVR and ask him all the time about whether it is an option.

“Before, we would tell patients we don’t know the risks between TAVR and surgery, but now we know it is at least equal to surgery,” Smith said.

However, while the trial results are very positive, Smith said one issue that will still take several years of data to answer is the durability of TAVR valves. He said this question will need to be answered with the long-term outcomes from the ongoing low-risk patient TAVR trials out to seven to 10 years.

The Partner 2A study was funded by Edwards LifeSciences. This study was simultaneously published online in The New England Journal of Medicine at the time of presentation.

The Sapien XT device used in this trial is an older model transcatheter. In 2015, Edwards LifeSciences launched the Sapien 3 device, which is expected to have even better results in another trial being presented at ACC.

Low-risk patient trials for both the Sapien 3 and the Corevalve TAVR devices were both approved earlier this year and will evaulate TAVR vs. surgical replacement. It is expected if these trials show TAVR is at least equal to surgery, it will lead to a phase out of surgical valve replacement for most patients.

Aortic stenosis happens when the aortic valve narrows or is blocked and therefore does not open fully. As a result, the amount of blood that can flow through the valve into the aorta and out to the body is restricted. If the condition is untreated, which usually involves valve replacement, the risk of death is 25 percent the first year after symptoms appear, and the risk rises to 50 percent the second year.