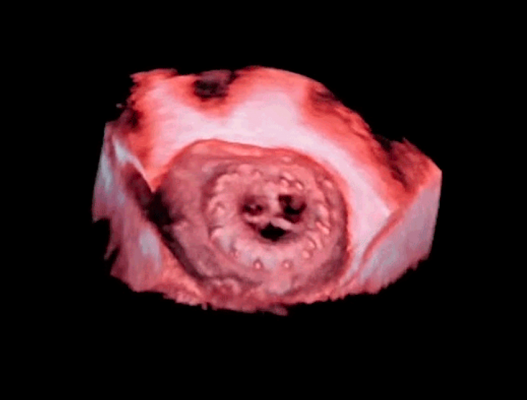 There were several overall key trends evident at the 2016 meeting of the American Society of Echocardiography in June. These included echo playing a key role in structural heart evaluation and for procedural guidance, ways to reduce operator variability and increase reproducibility of cardiac exams, new emphasis on use of contrast echo and strain imaging, and a proliferation of hand-held ultrasound systems for point-of-care cardiovascular assessments.

Watch a video interview on echo trends with the authors of this article at ASE 2016.

Many vendors offer advanced valve quantification applications, as well as preoperative planning software, for their premium-level systems. We are also beginning to see select vendors develop relationships with various technologically innovative companies, such as 3-D printing company Materialise, which prints models from computed tomography (CT), magnetic resonance imaging (MRI) and ultrasound images. These models are then used for preoperative planning. GE featured its collaboration with an advanced medical visualization software company, EchoPixel, which uses virtual reality software and glasses to display anatomy as 3-D interactive images. This technology was introduced as an experimental means of transcatheter valve replacement planning.

Read about how Echopixel’s technology may evolve into a replacement technology for angiography for transcatheter structural heart interventions.

Watch video “What is Required for Interventional Echo - Discussion With Dr. Rebecca Hahn”

Variability of the Ultrasound Exam

Establishing ways to increase reproducibility and reduce variability in cardiac measurements is an ongoing focus for clinicians and vendors. During the conference, speakers discussed the updated guidelines released in January of 2015 that provided updated normal ranges for chamber quantification and standardized measurement parameters in greater detail. Presenters stressed the need for clinicians to follow the various quantification criteria to decrease report variability. Patients should be able to see different physicians, sonographers and be imaged on different equipment without significant variability in their cardiac measurements.

In the exhibit hall, vendors highlighted the various advanced quantification applications that are aimed at increasing reproducibility in the cardiac exam through their premium-level systems. Many vendors offer on-cart advanced imaging technology and intuitive quantification software that can automatically compute ejection fraction and simplify myocardial strain analysis. By using the advanced software applications available and following a standardized measurement protocol, it is fair to presume these factors can reduce variability and increase the reproducibility of the ultrasound exam.

Watch the video “Echo Software Advances — New Cardiovascular Ultrasound Technologies at ASE 2015,” which covers many of the recent trends seen again on the show floor at ASE 2016.

Contrast Use With Echocardiography

Contrast use with echocardiography has been available for many years, but many programs do not use it on a daily basis. Currently, there are three contrast agents available on the market, and many echo programs have developed protocols for their use. All the major vendors have included software and workflow efficiencies for their equipment to assist customers with using contrast imaging, so the technology is available for users to incorporate this application. Contrast use can be especially helpful for the significant number of patients that are difficult to image. It has been suggested that contrast use increases the sensitivity for ischemia evaluation and is designated as appropriate use criteria by professional organizations. Some facilities have a low threshold for use with stress echo due to the enhanced imaging ability. However, many do not.

Although the use of contrast is practiced and encouraged by many professionals, acceptance and routine use is low for many programs. This is due to cost, logistics and staffing concerns though there are efforts underway on local and national levels to set standards and protocols to enhance the sonographer’s ability to use contrast. This includes training that would allow sonographers to start IVs on their own and remove the need for additional nursing staff. It also includes having standard orders in place that allow the sonographer to proceed with contrast imaging when standards are met.

Sonographers in many cases are already busy, and adding tasks and procedures to an already full schedule may face some opposition. There also are technological features being developed and used by vendors with the potential to minimize the need for contrast, providing alternate imaging technology to achieve the image to improve diagnostic ability.

The use of strain imaging in echocardiography has been around for many years; its use has grown as the technology has improved. Strain imaging is a powerful tool that can provide objective parameters to the otherwise subjective determination of global and regional wall motion.

Sessions at this year’s ASE regarding strain imaging attested to the current popularity as the attendance was heavy. When the audience was polled on strain imaging use, most of the audience members indicated they recently used this method. If this same poll had been taken just a few years ago, the results would have been very different.

Daily use of this tool is a part of many programs for diagnostic information for many disease states, including coronary heart disease, valvular heart disease, heart failure and cardiotoxicity tracking. In the recent past, there was a lack of agreement among vendors regarding strain imaging, but this has improved since. Now all major vendors offer this technology, which adds to the broad acceptance by users. However, in the sessions, there was mention of limitations, including poor image quality and the use of high frame rates, which lowers the- image quality. Some planned future developments are the addition of right ventricular (RV) strain, 3-D strain applications and even the ability to derive strain imaging down to the cardiac fiber level.

Watch a video on how cardiac strain is being applied to measure cardiac toxicity from cancer therapies.

There continues to be controversy surrounding the use of small hand-held or pocket-sized ultrasound systems. Opponents of HHU systems are concerned its supporters are trying to replace the stethoscope, which is traditionally used during a physical exam. Proponents of the hand-held systems stressed the importance of using HHU in conjunction with the stethoscope and physical exam.

In the exhibit hall of the American Society of Echocardiography (ASE), SonoSite displayed the iViz with various transducer options. Philips displayed the Lumify and showcased the various applications available on the system.

HHU can offer rapid assessment in emergent and critical care situations for shock, chest wall trauma and various other emergent issues. Supporters state that early diagnosis equates to quicker treatment and subsequently a decrease in mortality rates. By using a noninvasive ultrasound device instead of chest X-rays, it is possible to limit the patient’s exposure to radiation, as well as decrease the overall cost associated with assessing the patient in the emergency department.

The limited amount of user training was mentioned as a concern for those opposed to using HHU systems. Another concern was the lack of direct reimbursement for the use of HHU. These systems lack continuous wave Doppler capabilities, and not all systems allow for storage of images. Therefore, they do not meet the billing criteria for a limited echocardiogram study.

Proponents referenced various studies that have been conducted involving the use of HHU and noted these systems reduced time to diagnosis, reduced costs involved and provided reliable assessments. These results add to an ever-growing body of evidence that HHU systems are a clinical tool that can improve the quality of healthcare delivered when combined with a physical exam.

For more on advances in hand-held or pocket ultrasound technology, watch the video “Trends in Medical Imaging at RSNA 2015” which includes a segment with examples of the same technology shown at ASE 2016.

For more information of advances in cardiac ultrasound from the American College of Cardiology (ACC) 2016 meeting, watch the video” Trends in Cardiac Ultrasound at ACC.16.”

DAIC has created an apples-to-apples comparison chart of technical specifications of both echocardiography and point of care ultrasound systems used for cardiac evaluation. The chart requires a login, which is free and only takes a minute to sign up. It can be accessed at www.dicardiology.com/content/cardiovascular-ultrasound