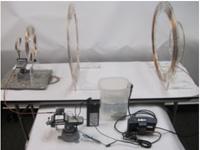 September 1, 2011 – Mechanical pumps to give failing hearts a boost were originally developed as temporary measures for patients awaiting a heart transplant. But as the technology has improved, these ventricular assist devices commonly operate in patients for years, including in former vice-president Dick Cheney, whose implant this month celebrates its one-year anniversary.

Researchers envision a future where patients would install transmission coils in their homes and workplaces to create zones where the implant would receive uninterrupted power.

Prolonged use, however, has its own problems. The power cord that protrudes through the patient’s belly is cumbersome and prone to infection over time. Infections occur in close to 40 percent of patients, are the leading cause of rehospitalization and can be fatal.

Researchers at the University of Washington and the University of Pittsburgh Medical Center have tested a wireless power system for ventricular assist devices. They recently presented the work in Washington, D.C., at the American Society for Artificial Internal Organs annual meeting, where it received the Willem Kolff/Donald B. Olsen Award for most promising research in the development of artificial hearts.

Joshua Smith, a UW associate professor of computer science and electrical engineering who recently moved to the UW from Intel Research Seattle, has for the past six years been working on wireless power. The concept is a variation on inductive power, in which a transmitting coil sends out electromagnetic waves at a certain frequency and a receiving coil absorbs the energy and uses it to charge a battery. Electric toothbrush charging stations and cell phone charging pads use a similar system, except that in both those cases the tool has to actually touch the charger and be held in a fixed position.

Smith and colleagues at UW and Intel devised an inductive system that adjusts the frequency and other parameters as the distance or orientation between the transmitter and receiver coils changes, allowing for flexible yet efficient wireless power over medium distances.

“Most people’s intuition about wireless power is that as the receiver gets further away, you get less power,” Smith said. “But with this technique there’s a regime where the efficiency actually doesn’t change with distance.”

That’s not far, but it’s enough to bridge the skin and tissue to reach a medical implant.

Four years ago, Smith’s system attracted the interest of a heart surgeon who had been experimenting with using traditional induction to transfer power, but was hampered by misalignment, unwanted heat generation, and ranges that were limited to a few millimeters.

“My primary interest is to help heart failure patients recover, and they can only recover if they are not tethered to a battery or external power supply so they can exercise and train their heart to recover,” said Pramod Bonde, M.D., a heart surgeon at the University of Pittsburgh Medical Center. “With wireless technology patients can be free and they can have a chance to move around and exercise like normal human beings.”

Using the wireless system means no power cord poking through the skin, dramatically reducing the risk of infection and improving the patient’s quality of life. Researchers envision a vest that could hold an external transmitter coil connected to a power cord or battery. A small receiver coil implanted under the patient’s skin would connect to a battery that holds enough power for about two hours, meaning the patient could be completely free for short periods of time to take a bath or go for a swim (current users of heart pumps cannot do either). Longer term, the researchers imagine additional power transmitters placed under a patient’s bed or chair, allowing patients to sleep, work or exercise at home unencumbered.

The experimental setup has a large transmission coil, at the right, connected to the building's electricity. At the left is the receiving coil, and near it is a smaller coil connected to a commercial heart pump sitting in a jar of fluid.

Results presented at the meeting showed the system could power a commercial heart pump running underwater using a receiver coil as small as 4.3 cm (1.7 inches) across. The power transmitted reliably with an efficiency of about 80 percent. Next the researchers hope to test the system with a heart pump implanted in an animal.

“The potential for wireless power in medical fields goes far beyond powering artificial hearts,” Bonde said. “It can be leveraged to simplify sensor systems, to power medical implants and reduce electrical wiring in day-to-day care of the patients.”

Co-authors are UW doctoral students Alanson Sample and Benjamin Waters and Yoshiya Toyoda and Robert Kormos of the University of Pittsburgh.

Collaborators at Intel are working on applications of the system9 to recharge consumer electronics. In addition to the heart pump, Smith is pursuing an application using wireless power to recharge ocean instruments underwater.