Experts from The Children's Hospital of Philadelphia explain the advances 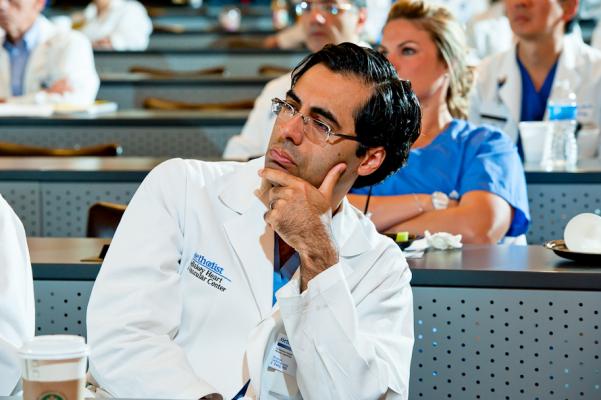 December 1, 2014 — Physician-researchers from the Cardiac Center at The Children’s Hospital of Philadelphia (CHOP) presented new findings on pediatric cardiovascular disease at the American Heart Association’s Scientific Sessions 2014 in Chicago. Among other topics, they investigated using automated external defibrillators in infants, long-term cardiac risk in surgical survivors of the Fontan operations for congenital heart disease, and whether centers that perform more cardiac catheterizations tend to have better outcomes.

Pediatric cardiologist Yoav Dori, M.D., Ph.D., delivered a lecture on fabricating innovative 3-D models of abnormal heart structures in individual patients to assist clinicians in planning complex heart surgery for each patient. Here is his summary of this presentation:

As the procedures performed for patients with congenital heart disease (CHD) become more complex, so does the need for better methods and tools for clinicians to understand complex three-dimensional anatomy and spatial relationships. 3-D rapid prototyping is quickly becoming a powerful tool to aid in planning, simulating, and teaching complex corrective CHD procedures. This review discusses the use of 3-D rapid prototyping in patients with CHD.

Children’s Hospital clinicians also moderated scientific sessions and participated on expert panels. Below are summaries of some of the research presented at abstract sessions.

Should AEDs Be Used in Infants?
While automated external defibrillators (AEDs) have improved survival rates for out-of-hospital cardiac arrests in many patient subgroups, little is known about the safety and efficacy of AEDs in infants. Joseph Rossano, M.D., and colleagues searched the scientific literature for relevant studies of the use of external defibrillation in infants with pediatric arrhythmias. The data from clinical studies on AED use in infants are limited, with no randomized clinical trials. However, research supports the accuracy of AEDs in recognizing pediatric arrhythmias, and two case reports demonstrated the successful use of AEDs in infants. Dosage studies suggest that further research is needed to determine the most effective defibrillation doses in children. Because the available evidence suggests that AEDs are safe and effective in infants, and because survival is unlikely in the absence of prompt defibrillation, the authors recommend the use of AEDs in infants with suspected cardiac arrest.
Joseph Rossano et al, What is the Evidence for the Use of Automated External Defibrillators in Infants?

Does Volume of Cardiac Caths Correlate with Better Outcomes?
In many types of cardiology procedures, there is an association between higher institutional volume and improved outcomes. Andrew C. Glatz, M.D., and colleagues investigated whether such a relationship occurs in congenital cardiac catheterization. The study team identified all congenital cardiac catheterizations from 2011 to 2013 at 64 institutions in the IMPACT (Improving Pediatric and Adult Congenital Treatment) Registry. Of the 33,825 catheterizations, a major adverse event occurred in 711 cases (2.1%). In unadjusted analysis, the risk of adverse events was lower in centers that perform more catheterizations for congenital heart disease. However, after adjusting for patient- and procedure-level factors, there was no significant association between center volume and outcome. The researchers added that the hospital sample size and low event rate may have limited their ability to detect significant differences.
Andrew Glatz et al, Relationship between Hospital Procedure Volume and Complications Following Cardiac Catheterization: A Report from the IMPACT Registry

Fontan Survivors with PA-IVS Remain at Risk for Late Myocardial Infarction
A subset of newborns with the congenital heart condition pulmonary atresia with intact ventricular septum (PA-IVS) are at risk of myocardial infarction (MI) and sudden death because of abnormal coronary circulation. To avoid this, such patients may undergo single ventricle palliation and ultimately the Fontan procedure. Data are lacking, however, on the survivors’ risk of long-term myocardial ischemia. Adam Small, M.D., Therese Giglia, M.D., and colleagues performed a retrospective review of CHOP patients who underwent the Fontan procedure for PA-IVS between 1985 and 2013. There were 46 patients who met inclusion criteria for the study, with median follow-up of 3.5 years (range 0-27.9 y) after the Fontan. There were two early deaths after Fontan. Five patients had evidence of late ischemia: two had non-fatal MI at 16.9 and 18.8 years post-Fontan and three additional patients had evidence of ischemia on stress test and/or cardiac MRI without clinical evidence of MI. No patient had traditional risk factors for atherosclerotic coronary disease, and there were no late deaths or sustained ventricular tachycardia. Patients with PA-IVS and single-ventricle palliation remain at risk for long-term myocardial ischemia. Further study is needed to define risk factors for ischemic outcomes.