Clinically Dead for 40 Minutes and Alive to Tell the Tale 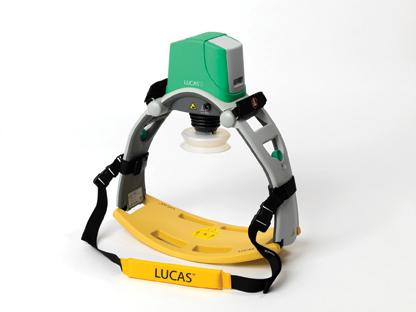 What started as a normal working day in suburban Melbourne, Australia, for Vanessa, a 41-year-old mother of two, suddenly became a lengthy battle for her life. 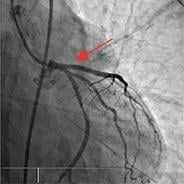 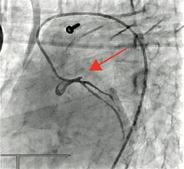 The patients' coronary blockage prior to PCI.

What started as a normal working day in suburban Melbourne, Australia, for Vanessa, a 41-year-old mother of two, suddenly became a lengthy battle for her life.

While sitting on her couch at home Vanessa started feeling chest pains and collapsed. Fortunately, her mother was with her and remembered seeing the Australian Heart Foundation’s warning signs advertisement and recognized the symptoms of a heart attack. An emergency call had mobile intensive care ambulance (MICA) paramedics at the house within minutes. She arrested soon after the paramedics arrived, but was successfully defibrillated with a single shock and was stabilized for the journey to Monash Medical Centre in Melbourne.

During transportation, the ECG data was transmitted from the ambulance to the hospital to alert emergency department staff of an incoming ST-elevated myocardial infarction (STEMI) patient and the need to activate the cardiac catheterization lab. Upon arrival, the woman was conscious and talking to the medical staff. However, she suffered a second cardiac arrest while speaking to the interventional cardiologist. Nurses started manual CPR and defibrillation, but after a few minutes it became obvious that ventricular fibrillation could not be reverted and that resuscitation was likely to be protracted.

Several staff members were co-opted to transfer Vanessa to the operating table and to provide manual CPR. This quickly became a trying task given the staff were wearing heavy lead aprons and standing on stools so as to be in the correct position to deliver compressions on the elevated operating table.

The clinical nurse educator working in the adjacent lab was called to assist and made the decision to use the LUCAS 2 mechanical chest compression device to provide automatic external chest compressions. The radiolucent carbon fiber backboard was placed under Vanessa’s shoulders and the piston/suction cup placed over her chest. Once started, the LUCAS 2 applied continuous chest compressions of at least 5 centimeters at a consistent rate of 100 or more compressions per minute.

X-ray imaging of the coronary arteries showed that the left anterior descending artery was completely occluded and it was unlikely that successful defibrillation and return of spontaneous circulation (ROSC) could be achieved without first opening this vessel and reperfusing the myocardium.

The mechanical compressions maintained blood pressure within the vessels and allowed the doctors to gain access to Vanessa’s femoral arteries. The interventional cardiologist performed an angiogram and then threaded catheters through to the site of the blockage to conduct an angioplasty to unblock the coronary arteries. The LUCAS 2 worked continuously the entire time under the drapes of the sterile field. Use of the device helped protect the staff from unnecessary exposure to fluoroscopy if they had delivered manual chest compressions.

During the percutaneous coronary intervention (PCI) procedure, the LUCAS 2 provided consistent, continuous perfusion to the brain, heart and major organs, giving the clinical staff the opportunity to focus on the patient management required to save Vanessa’s life.

“Seeing we have consistent perfusion with the LUCAS 2 gives us peace of mind,” said Dr. Wally Ahmar, interventional cardiologist, at MonashHeart at Monash Medical Centre.

Even though the underlying cardiac problem can be repaired, without adequate perfusion there is the risk of brain damage.

“It was so surprising the patient had no neurological deficits,” said John Koutsoubos, nurse unit manager at MonashHeart.

Vanessa, a sales representative for an earth-moving equipment company, had no history of heart problems before this episode, but is alive and with her young family thanks in part to the LUCAS 2. Despite having a downtime of approximately 53 minutes, she was discharged from the hospital just seven days later. Post-operative tests indicated she had no noticeable neurological deficits and following a stress echocardiogram at six weeks, Vanessa was cleared to return to full-time work and a fully normal life.

Medical staff from MonashHeart had seen the LUCAS 2 demonstrated at the EuroPCR conference in Barcelona in 2010. The decision to acquire one of the devices for the facility was made a few months after the conference when a patient died in the cardiac cath lab. MonashHeart is the only Australian public hospital to have a LUCAS 2. The only other organization in the country to have them available is St. John Ambulance in Western Australia.

The LUCAS 2 at MonashHeart was purchased with money raised from a sponsored 520-km bike ride undertaken by staff from MonashHeart, Monash Health and Port Philip Police and their families and friends. The group of 24 cyclists rode in the 24-hour challenge from Mildura in the northwest to Port Fairy on the Victorian coast and raised the funds to purchase their LUCAS 2.

Engineered to meet the exacting standards of paramedics and hospital staff, the manufacturer said the LUCAS 2 is a robust and reliable device that significantly increases the quality and consistency of compressions compared to manual CPR.