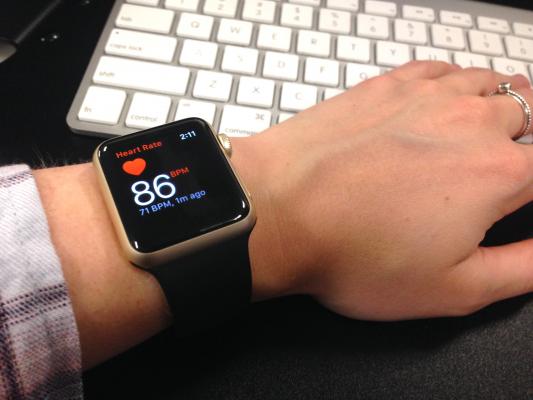 March 15, 2018 – A newly-designed wristband and corresponding app that works with a smartwatch can accurately display the heart’s electrical activity and notify people with atrial fibrillation (AFib) if their heart is beating normally or not, according to data being presented at the American College of Cardiology’s 67th Annual Scientific Session. In one-third of cases, the rhythm picked up by the wearable device was unclassified; however, when coupled with physician’s review, it could reliably differentiate between AFib and normal heart rhythm.

AFib, a type of heart rhythm disorder that causes the heart’s upper chambers to beat erratically, affects 9 percent of people over the age of 65 in the U.S. Finding ways to help patients know if they are having an acute episode can improve treatment and outcomes.

Much more versatile than a heart rate monitor, the smartwatch wristband records a single lead electrocardiographic (ECG) tracing, visually showing the heart's electrical activity, including the rate and regularity of heartbeats. When wearing the watch, patients can at any moment place a finger on the designated spot on the specifically designed wristband for 30 seconds, and the smartwatch algorithm will instantaneously tell the wearer if the rhythm is normal, indicative of AFib or undetermined.

“Our patients are exposed to a growing number of healthcare devices that are available for purchase without a prescription. What we don’t know is if these devices provide meaningful clinical information that patients and their physicians can interpret and use effectively,” said Joseph Bumgarner, M.D., an electrophysiology fellow at Cleveland Clinic and the lead author of the study. “Our study is the first to assess how accurately a wearable smartwatch device can identify AFib or normal sinus rhythm compared to a standard 12-lead ECG as is often done in the clinic.”

The blinded, prospective study enrolled 100 patients (68 years of age on average) with AFib who consecutively presented for a scheduled electrical cardioversion, a procedure that applies an electric shock to the heart to restore normal rhythm and is often done under some type of sedation or anesthesia. People who had a pacemaker or implanted defibrillator were excluded. Study participants were each given a smartwatch equipped with the special wristband and were coached on how to use it to generate the wave-patterned tracing. They then underwent a standard ECG. If cardioversion was indicated, both tests were repeated after the procedure. Bumgarner and his team compared the automated smartwatch band interpretations with the physician-reviewed standard ECG. The watch-derived recordings were stripped of identifying information, shuffled and reviewed by two blinded electrophysiologists—cardiologists trained in heart rhythm problems—to see how accurate the diagnoses were.

“Out of the box, the smartwatch band and its algorithm were very good at identifying AFib, but when coupled with a physician’s interpretation of the recording [as it should be used], it became even more clinically useful,” Bumgarner said. His team was not involved in developing the algorithm or the technology. “Its accuracy was comparable to the standard 12-lead ECG that we use in our clinic every day.”

Based on their findings, Bumgarner said there may be potential cost savings to using a device like this.

“There were a significant number of patients—about 8 percent—who on the day of their procedure were found to have a normal heart rhythm [as determined by the watch and validated by the ECG] and did not require a procedure,” he said. “In the future this technology may help screen patients prior to presentation for elective procedures and avoid scheduling ones that are unnecessary.”

Cleveland Clinic electrophysiology lab performs as many as 10 to 15 cardioversions each day. While this study involved only patients with AFib who were already scheduled for an elective cardioversion, Bumgarner said it would not be unreasonable to apply this technology in the outpatient setting as well.

“The prevalence of AFib continues to rise, and many people with AFib choose to undergo cardioversion at some point to restore a normal heart rhythm, and so this technology could have wider applicability in the future,” he said.

The Kardia Band, which is paired with an app that provides an algorithm for detecting AFib and attaches to a wearable smartwatch as an add-on accessory, was cleared by the U.S. Food and Drug Administration in November 2017 and is now available in the consumer marketplace. AliveCor, the company that makes the Kardia Band, provided smartwatches for the study but was not involved in the design, implementation, data analysis or interpretation of the study.