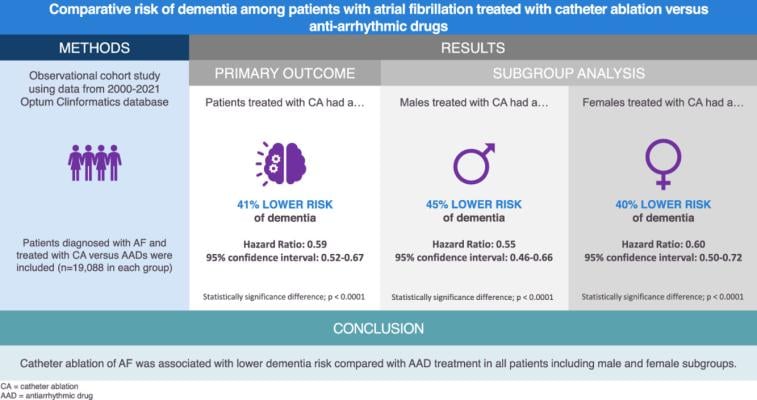 November 10, 2022 —  Biosense Webster, Inc., the global leader in cardiac arrhythmia treatment and part of Johnson & Johnson MedTechi, announced today that data from a Biosense Webster-sponsored study that compares the risk of dementia in patients with atrial fibrillation (AFib) who were treated with catheter ablation (CA) versus anti-arrhythmic drugs (AAD) was published in the American Heart Journal. The study evaluated non-specific catheter claims information and found that CA was associated with significantly lower risk of dementia compared to treatment with AAD only1.

AFib is the most common type of cardiac arrhythmia and impacts nearly 40 million people worldwide2, and 6 million people in the U.S. alone3. Cases of AFib are expected to increase to 16 million by 20504 in the U.S. AFib is associated with significant cardiovascular comorbidity, including multiple forms of brain injury such as stroke, cognitive impairment and dementia5,6. Dementia, in particular, presents a profound burden with more than 10.5 million Americans predicted to be affected by 20507. Historically, dementia in patients with AFib was attributed to multiple strokes; however, studies have shown that AFib is associated with multiple forms of dementia, even in the absence of stroke8.

“Atrial fibrillation and dementia independently are a growing concern with the aging of our population. Through this study we sought to better understand the complex relationship between AFib and dementia by exploring how treatment type for AFib plays a role in the development of dementia, and how clinicians might reduce this risk,” said Emily P. Zeitler, MD, MHS, assistant professor of medicine, Geisel School of Medicine, Dartmouth. “Catheter ablation, as a course of AFib treatment, may reduce this risk.”ii

AFib suppression, or “rhythm control,” often becomes the treatment goal following an AFib diagnosis. This is often attempted first with AAD. For those eligible, catheter ablation is associated with greater reduction in AFib burden, improved quality of life, and reduced mortality and cardiovascular hospitalizations9,10,11.
According to the study, AFib patients treated with catheter ablation had a 41% lower risk of dementia compared with those treated with anti-arrhythmic drugs (1.9% vs 3.3%; hazard ratio [HR] 0.59, 95% confidence interval [CI] 0.52-0.67)12. Reduced risk of dementia was observed among both male and female subgroups. The reduction in the risk for dementia associated with catheter ablation versus AAD for the subgroup of female patients was 40%; in males it was 45%13.

“Research like this supports the hypothesis that AFib suppression may reduce the risk of developing dementia,” said Jamie March, head of health economics and market access, Cardiovascular Specialty Solutions Group, Biosense Webster, Inc. “That understanding underscores the importance of innovations like catheter ablation to the large and growing AFib patient population.”

ii Biosense Webster, Inc. entered into an Authorship agreement with Dr. Zeitler. She has not been compensated.