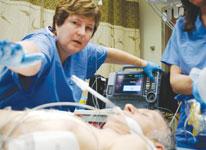 The key players in the U.S. defibrillator-monitor market are Physio-Control, Philips and Zoll. These systems offer much more robust capabilities than consumer-grade automatic external defibrillators (AEDs). Today’s defibrillator-monitors offer 12-lead electrocardiograms (ECGs), remote wireless transmission of these waveforms to hospitals ahead of a patient’s arrival, and additional vital signs data. The systems are designed for use by both emergency medical services (EMS) and hospital code-blue teams.

Among the biggest and most recent news in this market was the November 2011, $487 million sale of Physio-Control by its parent company. Medtronic sold its Physio-Control division to Bain Capital, a global private investment firm. Physio-Control President Brian Webster continues to lead the company and will be named chief executive officer when the final deal is closed in the first quarter of 2012.

Military Ruggedness
Military specifications are frequently used as a gold standard for the ruggedness of a product.  In 2011, Philips received a $9.3 million order from the U.S. Air Force for its HeartStart MRx defibrillator-monitors. In the year prior to that, Philips received more than $20 million in orders for its systems from the Defense Logistics Agency (DLA) Troop Support Corporate Exigency Contract.

The Zoll Propaq MD Monitor/Defibrillator received U.S. Food and Drug Administration (FDA) clearance in August 2010. It was specifically designed to meet the special needs of the military and air medical operations. It was developed as a joint project between the Department of Defense and a cooperative arrangement between Welch Allyn and Zoll Medical Corp. Development was facilitated with grants from the U.S. Army Medical Research and Development Command.

The Propaq MD is an ultra-lightweight, compact device with sophisticated capabilities that combine the proven features of the Welch Allyn Propaq monitors with the therapeutic capabilities of Zoll defibrillation and noninvasive pacing technologies. Zoll says the system is 60 percent smaller and 40 percent lighter than similar defibrillator-monitors. It is two pounds lighter than the current military vital signs monitor, the Propaq 206, even with defibrillation and pacing added.

Zoll is developing the companion Propaq M,  a monitor-only version of Propaq MD. It will have an identical interface for operation, batteries, power supplies, blood pressure cuffs, accessories, data and cables, but without therapeutic defibrillation and pacing capability.
Remote, Pre-Hospital ECG Transmission

With the goal of lowering door-to-balloon times, many hospitals have established STEMI networks so EMS can use Web-based, wireless technology to send pre-hospital electrocardiograms (ECG) from the field to the hospital. This allows a physician to review the ECG to confirm an ST-elevated myocardial infarction (STEMI) case so the cath lab can be activated prior to the patient’s arrival.

Zoll, Philips and Physio-Control all offer Web-based platforms designed to share pre-hospital 12-lead ECGs sent from their defibrillator-monitors. Originally, each system only interfaced with the specific vendor’s defibrillator-monitors, but over the past two years some companies developed vendor-neutral platforms.

For example, Physio-Control altered its LifeNet remote access system so it now connects 12-lead devices from various manufacturers via the Lifenet Adapter.  This overcomes the issue many hospitals face when creating a pre-hospital ECG system: numerous EMS organizations that bring patients to a hospital may use defibrillator-monitors from several vendors. This type of interface allows hospitals to standardize the management of chest pain cases regardless of the monitoring equipment used by EMS in the field.

Physio-Control enhanced its remote transmission network in 2011 by partnering with AirStrip to enable dynamic ECG waveforms (instead of static JPG images) to be accessed anywhere using an iPhone or iPad. The software allows zooming in on waveforms, which does not affect visual clarity. Clinicians can view current data and historical tests conducted up to one year ago, in 10-second increments.

In late 2011, Philips introduced the HeartStart FR3 AED in the United States for professional responders who treat victims of sudden cardiac arrest (SCA). The system is Philips’ most advanced professional-grade AED, which offers a step-down from a full defibrillator-monitor but more advanced capabilities than a consumer-grade AED. The FR3 requires a prescription and must be used under medical direction.

The FR3 automatically powers on when its carrying case is opened. The device also features easy-to-access, pre-connected peel-and-place pads that do not require opening a foil pouch. These unique features help speed therapy delivery.

The HeartStart FR3 includes several innovations: a bright, high-resolution color LCD that provides visible prompts for easier use in noisy environments; a CPR metronome that keeps the beat for consistent chest compressions; and bilingual configurability so that voice and text prompts can be clearly understood by a variety of responders.

This story was an introduction to a comparison chart of defibrillator-monitors. To access the chart, click on the comparison chart link at the top of the page. Participants include Philips Healthcare (www.healthcare.philips.com), Physio-Control (www.physio-control.com) and Zoll Medical (www.zoll.com).