Benefits Shown for Treating All Clogged Arteries After a Heart Attack 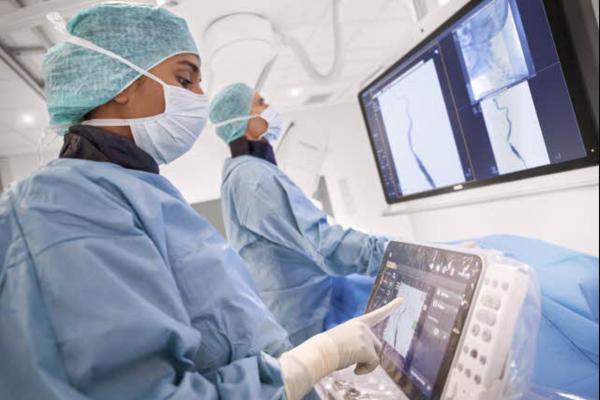 March 27, 2017 — Patients experiencing a major heart attack often have more than one clogged artery, but under current guidelines doctors typically only clear the blockage responsible for the heart attack. Assessing and, when warranted, treating the additional blockages can improve patient outcomes and reduce the need for subsequent invasive procedures, according to research presented at the American College of Cardiology (ACC) 2017  Annual Scientific Session.

The COMPARE-ACUTE study findings are in line with previous studies pointing to benefits of a more comprehensive treatment approach after a major heart attack, but it is the first randomized clinical trial in which doctors have used the newer diagnostic tool fractional flow reserve (FFR) to precisely assess secondary blockages. Compared with patients in whom doctors treated only the blockage that caused the heart attack, patients who received FFR-guided evaluation and treatment of all arteries were 65 percent less likely to experience the trial’s primary endpoint, a composite of all-cause mortality, non-fatal heart attack, stroke and subsequent revascularization (such as angioplasty or bypass surgery to clear blocked arteries) at 12 months.

“Our study shows you can optimize treatment with this approach and potentially also have economic benefits by reducing the need for extra procedures,” said Pieter Smits, M.D., a cardiologist at Maasstad Ziekenhuis, Rotterdam, the Netherlands, and the study’s lead author. “For the patient, it’s a tremendous advantage to know that you have been treated for the artery that brought you to the hospital but also that any other issues have already been investigated and treated if needed. This way the patient won’t need to be brought back to the hospital later on and again be put at risk with an invasive procedure or additional diagnostics.”

Medical guidelines currently recommend performing PCI on the infarct-related artery after STEMI and leaving the other arteries alone, treating them later if subsequent tests or symptoms indicate they are substantially blocked by areas of plaque buildup, known as atherosclerotic lesions. Smits and his colleagues sought to investigate whether FFR could offer an opportunity to improve outcomes by refining doctors’ ability to identify problematic lesions immediately after successful initial PCI. Because it is based on precise measures of blood pressure near lesions, FFR provides a much more accurate assessment of blockages than was previously possible with angiogram alone.

When assessing the lesions other than the one responsible for the heart attack, the researchers found that only about half of these lesions were constricted enough to require treatment. Together, these results suggest that treating non-infarct related lesions is beneficial and that FFR can help clinicians to precisely identify those lesions in need of treatment.

“The results show that using FFR in the acute phase of STEMI, which was never done before, is feasible and safe,” Smits said. “Furthermore, FFR-guided complete revascularization allows you to fine-tune the treatment and get better outcome results.”

Another limitation is that the study was not large enough to reveal statistically significant differences in all-cause mortality or subsequent heart attacks. A larger study, currently underway, is expected to shed light on these outcomes. In addition, Smits and his colleagues plan to conduct a further analysis of the cost implications of performing infarct-only revascularization versus complete revascularization after STEMI.

The trial was funded by two unrestricted grants from Abbott Vascular and St. Jude Medical. This study was simultaneously published online in the New England Journal of Medicine (NEJM) at the time of presentation.

Read the abstract for the study in the NEJM “Fractional Flow Reserve–Guided Multivessel Angioplasty in Myocardial Infarction.”

Watch a VIDEO interview about the iFR vs. FFR trials at ACC.17 that showed iFR to equal in outcomes.