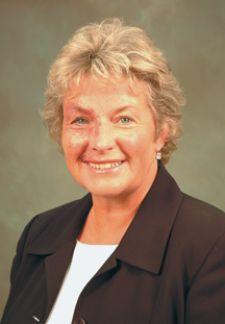 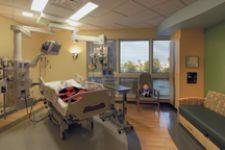 In the old days of pediatric intensive care at Children's Medical Center of Dayton, parents could be found in the wee hours of the night curled up on two chairs pushed together in order to be close to their critically ill child. But today, the brand new Wallace Critical Care Complex at the Ohio facility offers a fold-out sofa-bed-for-two in all of its 21 patient rooms — just one example of the many tangible, family-focused reasons the center was awarded the prestigious ICU Design Citation this year from the Society of Critical Care Medicine, the American Association of Critical Care Nurses and the American Institute of Architects, jointly.
The driving philosophy that steered the year-long total renovation was simple, says Cindy Burger, MS, RN, CNAA, director, Critical Care Services: to create family-centered care. And it’s a mission that resonates from every corner of the 16,500-square-foot PICU today.
“There is nothing more stressful than having a child in the intensive care unit,” said Burger. “We wanted to create a place to support families. Parents are not considered visitors — they are integrally involved in the care of their children, and we needed to design a unit that would support that.”
The end result not only met the staff’s goals but abundantly fulfilled the criteria for the ICU Design award, which seeks to recognize a critical care unit already in operation whose design demonstrates attention to both functional and humanitarian issues and demonstrates (1.) a commitment to a healing environment, (2.) a commitment to promoting safety and security, (3.) a commitment to efficiency, and (4.) attention to innovative, aesthetic and creative design features. In addition to honoring Dayton Children's, the award also recognizes the ICU’s architect, David Glover, vice president of Pinnacle Architects.
The unit design features 13 240-square-foot private patient rooms, two 400-square-foot semiprivate patient rooms to accommodate siblings injured in the same event, plus an additional six private rooms adjacent to the unit for technology-dependent patients. Every patient room is equipped with ConMed ceiling-mounted, articulating booms into which all electrical and gas devices are plugged, thus completely removing all cords from the floors and keeping all monitors, ventilators, IV pumps and more out of the way between patients and their caregivers and families.
“We have 360-degree access to the patient,” said Burger, who also noted that the rooms’ Total Care beds from Hill-Rom enable movement to any position for the patient as well as almost any placement in the room, including right beside mom or dad at nighttime. Although there is a Ronald McDonald House across the street for out-of-town families of patients, “When your child is in intensive care and they’re unstable,” said Burger, “across the street is too far.”
“Parents know their child better than anyone else,” Burger said, which makes them the perfect complement to the team of caregivers. Because parents can remain at bedside around the clock, they are present for physician rounds and nurse shift changes, adding valuable input as treatment plans and medications are administered.
The center’s ICU also caters to its patients’ families with a large, comfortable lounge that accommodates several families at once, a full kitchen (where volunteers often bake cookies), laundry facilities, showers and dressing rooms equipped with toiletries and clothing to care for families who have come directly to the unit from an emergency scene such as an automobile accident.
The gentle, healing atmosphere is augmented with serene, specially commissioned artwork throughout the unit — it took local Ohio artist Char Hinkley six months to paint full-wall murals and patient-room scenes that depict peaceful nature settings. This original art, combined with another commissioned piece of artwork — a sound sculpture — as well as soft pastel hues throughout the decor, contributes to the kid-friendly theme with wide appeal for a unit that treats infants through 21-year-olds. Sound-muffling ceiling tiles, angled corridors, and paned glass french-door entries to patient rooms all help to take the sterile, institutional feeling out of this unique pediatric ICU, Burger said.
Hospitals from around the country are already beginning to phone Dayton Children's to find out more and to tour the facility, which opened last June. It’s a bit of deja-vu for Burger and her team — she oversaw the redesign of the hospital’s NICU which won the same award in 1999, making Dayton the only hospital to win the ICU Design Citation twice. Clinicians and administrators from hundreds of hospitals flocked to the center to see and emulate the site then, and hospitals considering new ICU designs will likely be knocking on Dayton’s doors once again for a first-hand look at how a caring mission became an innovative, healing environment for children and their families.