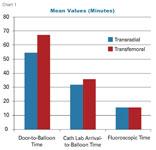 There is much discussion about the possibility of using transradial artery access to help reduce door-to-balloon times in ST-elevation myocardial infarction (STEMI) patients. Northside Hospital, Tampa Bay Heart Institute in St. Petersburg, Fla., wanted to test this theory, specifically in a community hospital setting, and conducted the following study. We found that transradial artery access is noninferior compared to transfemoral artery access, helped lower door-to-balloon times and that operator experience had a significant impact on the rate of complications, hospital length-of-stay and expenditures.

STEMI represents a subset of patients with acute coronary syndrome.  Current American College of Cardiology and American Heart Association (ACC/AHA) guidelines for patients with STEMI recommend use of percutaneous coronary intervention (PCI), barring any contra-indications.(1, 3)  In these patients, restoration of TIMI 3 flow is of paramount importance, with lower door-to-balloon times associated with improved outcomes.(1)  STEMI patients frequently require multiple agents to treat the thrombotic milieu and are at especially high risk for access-site-related complications;(2) including retroperitoneal bleeding, hematoma, A-V fistula and pseudo-aneurysm formation.  These complications are associated with higher rates of blood transfusions and overall poorer outcomes.(3, 10)

The vast majority of PCIs for STEMI patients in the United States are performed via the transfemoral artery (TFA) approach with its associated access site complications.(1)  However, large randomized clinical trials studying transradial artery (TRA) access have demonstrated advantages in reducing access site complications.(4)  The advantages of  TRA become more apparent under conditions of aggressive anticoagulation and antiplatelet treatment as in STEMI patients.(4)  In addition, patients are able to ambulate more quickly, leading to reduced length-of-stay and hospital expenditures. Some opponents of the TRA approach claim it is technically more challenging and may lead to increased time to reperfusion with increased fluoroscopic time and poorer outcomes.(5)

One hundred fifty-one patients presenting to our community catheterization laboratory for PCI with STEMI from July 2009 to December 2010 where intervention was performed were studied. Five interventional cardiologists performed primary PCI. Although access site selection was left to the primary operator, one interventional cardiologist used the TRA approach as the default approach, and four used the TFA approach. Group I (n=27) patients underwent primary PCI via the TRA approach, and Group II (n=124) underwent primary PCI via the TFA approach.

A total of nine patients in the study required blood transfusions; one patient in Group I and eight in Group II. The mean hemoglobin decrease was 4.5 g/dL in Group I and 4.8 g/dL in Group II.  Amongst Group II, four patients formed hematomas and two had retroperitoneal bleeds. One of these patients required dialysis for acute renal failure. Two patients formed pseudo-aneurysms; one required ultrasound compression with thrombin injection, and the other required surgery.  The only transradial patient with a complication suffered a coronary perforation and was placed on comfort measures by the family and subsequently passed away.

Rapid restoration of TIMI 3 flow of an infarcted artery is of paramount importance in STEMI patients. To achieve this target, the TRA or TFA approach can be utilized. Some operators avoid using the TRA approach due to its technical difficulties in sheath insertion and catheter manipulation. That being said, the hemorrhagic and access site complication rate associated with the TRA approach is lower than with the TFA approach.(5)

The aim of this paper is to report our experience in the community hospital with implementation of TRA access in STEMI patients and to show that this strategy is noninferior to TFA access in timeliness and fluoroscopic time, and is probably more advantageous when access site vascular complications, early mobilization leading to reduced hospital length-of-stay and hospital expenditures are considered.

Several studies have demonstrated the harmful impact of hemorrhagic complications after PCI on the morbidity and mortality of STEMI patients.(6, 7)  Hermanides et al (7) reported that major bleeding complications were strongly and independently associated with worse morbidity and mortality.  The Horizons trial showed reduced bleeding at 30 days led to improved mortality in STEMI patients.(10)  Similar evidence has also been shown in another study in patients with NSTEMI (non-ST-segment elevation myocardial infarction) and unstable angina.(9)

In a systematic meta-analysis, Jolly et al (8) showed that TRA access was associated with a 73 percent reduction in the incidence of major bleeding compared to TFA access.  In addition, there was a trend toward fewer adverse cardiovascular events with TRA access.  In a study by Arzamendi et al,(9) TRA was associated with fewer deaths, cardiovascular events and bleeding complications compared to TFA in patients treated for STEMI.

Our study shows that the TRA approach was performed with less hemorrhagic and access site complications compared to the TFA approach, and ultimately resulted in a trend toward significance with respect to reduced hospital length-of-stay and expenditures.  In addition, we found that the technical difficulties associated with the TRA approach can be overcome by operator experience and didn’t significantly lead to increased door-to-balloon time or fluoroscopic time.  Although our results don’t show statistical significance there is a trend toward significance with improved outcomes, as compared to the Jolly et al trial (8).

Our findings from the community setting, and other large studies, are in agreement with the European Society of Cardiology (ESC) and the European Association for Cardio-Thoracic Surgery (EACTS), which recommend in their Guidelines on Myocardial Revascularization the use of “radial access in patients at high risk of bleeding.”(11)

Radial access was performed with one operator and future studies will need to address multiple operators performing both approaches.  As a result, our study has a lower number of radial cases compared to femoral cases, which could account for the higher number of femoral complications.  Future studies in the community setting will need to address higher case volume which may result in a statistically significant difference.  In addition, equivalent numbers of radial and femoral cases should be analyzed, looking specifically at infarct artery location.  Our community based study did not specifically look at long-term data.  Thus, our findings can only be extrapolated to improved morbidity and mortality based on the current available literature.(6-10)

Our findings show that transradial artery (TRA) access is noninferior compared to transfemoral artery (TFA) access in STEMI patients in the community setting, and TRA approach can be safely used.  We found that with operator experience there was a trend toward significance with respect to complication rate, hospital length-of-stay and expenditures, without sacrificing timeliness or fluoroscopic time.  These results are encouraging in that the transradial artery approach can be integrated into the community based hospital treatment repertoire for STEMI patients.