Volcano and a start-up hope to introduce easier-to-use, less-expensive FFR 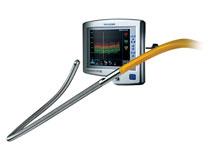 In the current era of healthcare reform and increasing requirements to follow appropriate use criteria, any technology that offers a basic yes or no answer to whether a patient should be treated or tested may have a major impact on healthcare. Fractional flow reserve (FFR) is a poster child example of this type of technology, which eliminates intra-observe variability and physician intuition and replaces it with a straightforward index based on clinical evidence. However, while FFR offers an accurate diagnostic tool to provide functional data that the human eye alone cannot see, its use has been limited by its cost and the time it takes to perform.

FFR determines the functional severity of narrowings in the coronary arteries and pinpoints specifically which lesions are responsible for significantly obstructing the flow of blood causing ischemia. It is especially useful in patients with several lesions in a vessel segment, of which several might have been stented in the past without use of FFR. The test has shown interventional cardiologists stents are not needed on all lesions that looks severe, and that lesions that appear mild can sometimes be the culprit of ischemia. Lesions that look flow restricting on a computed tomography (CT) scan or angiogram many times in reality have adequate blood flow, as shown empirically by FFR. In these cases, patients can be treated medically without the need for permanent hardware being placed in the vessel.

Evidence from the FAME I trial[1] and others that followed showed FFR can contribute to major reductions in death, myocardial infarction and target lesion revascularization. FFR-guided percutaneous coronary intervention (PCI) also was shown to save about $2,000 per patient, based on the stents that were not placed because FFR showed they were not needed.

“FFR almost seems to good to be true,” said William Fearon, M.D., Stanford University School of Medicine, who was the U.S. principle investigator for the FAME trial. During a session on FFR at ACC 2012 he said FFR is cost-effective, easy to use and is backed by good clinical evidence, but it is only used in less than 10 percent of PCI cases in the United States. Like most experienced operators, Fearon said he would not use FFR during the 3 a.m. STEMI case, or in cases where there is clearly a single culprit lesion. But, he explained FFR can be helpful and produce better patient outcomes in other types of cases, such as intermediate coronary stenoses, usually defined as 40-70 percent stenosis.

Data collected between April 2009 and September 2010 by the CathPCI Registry for 61,874 attempted coronary interventions of intermediate coronary stenoses showed FFR was used in only 6.1 percent of these patients.[2] The same study found an intravascular ultrasound (IVUS) use rate of 20.3 percent. By far, most interventional cardiologists were still assessing 73.6 percent of these patients with angiography alone. The study found patients undergoing FFR were more likely to have had a prior stress test that had negative or equivocal findings. It also found both the FFR and IVUS cohorts had longer fluoroscopy times and more contrast use as compared with the angiography only group.

This analysis showed that despite a wealth of data demonstrating the utility of FFR in the evaluation of intermediate coronary stenoses[3, 4], it is only used in a small minority of such cases. The study[2] concluded a number of factors probably contributed to these low rates of use, such as the fact that the catheters used to perform these lesion assessments are costly and poorly reimbursed, if at all. In fact, routine use may provide a financial disincentive, as the cost of the procedure increases with the use of the catheters and the reimbursement decreases with less frequent stent implantation. Another reason FFR may have low usage is because it requires use of the drug adenosine, which induces hyperemia and minimizes and stabilizes coronary resistance during the test, but is uncomfortable for patients.

iFR May Offer Solution to Increasing FFR Use

Adenosine achieves a stable flow, since each segment of the cardiac cycle has different resistance factors. Current FFR pressure wires require the stable flow to make measurements based on pressures detected over several minutes. Setup time can be up to 10 minutes and each run takes about two minutes, usually with two performed to double check the numbers, said Justin Davies, BSc, MBBS, Ph.D., a clinical academic in cardiology at the Imperial College London. Due to the time required, many operators do not perform post-procedure FFRs because it is too time-consuming. The time involved has translated into low U.S. usage and he said European use is only slightly higher.

Davies developed a technique called instantaneous wave-free ratio (iFR) as a possible solution to these issues with FFR. He said the iFR algorithm can detect the pressures in the diastolic phase of the cardiac cycle and extract the needed data without adenosine in about five heartbeats. “The time difference is huge,” Davis said.

The iFR algorithm was tested in the ADVISE trial[5], which concluded that iFR yielded similar results to traditional FFR after review of 157 stenoses in 131 patients. The resting ratio of the distal-to-proximal pressure during this period, iFR, correlated closely with FFR with excellent diagnostic efficiency, specificity, sensitivity, and negative and positive predictive values of 91 percent, 85 percent, 85 percent and 91 percent, respectively. The results were presented during the 2011 Transcatheter Cardiovascular Therapeutics (TCT) scientific symposium.

“The clinical implications of the trial are that significant barriers to a physiological assessment of stenoses have been removed, and the new technique can potentially improve workflow in the cath lab, leading to a better patient experience and increased adoption,” Davies said.

More data is still needed, as a more recent VERIFY study[7] attempted to confirm the results of the ADVISE trial, but found iFR correlates weakly with FFR and is not independent of hyperemia. The results of the prospective, multicenter study of 206 consecutive patients showed a moderate overall correlation between FFR and iFR, but only a weak correlation in the clinically important range for decision-making.

St. Jude Medical integrated the functional and anatomical modalities of FFR and optical coherence tomography (OCT) into one platform in 2011.  The Ilumien system enables OCT imaging and wireless FFR measurement. The wireless system simplifies set-up and measurement through the elimination of connecting cables.

A new start-up company called Guided Interventions LLC announced in January it is developing new, easier to use and more affordable FFR wire. Current FFR guide wires can be difficult to guide through an artery because their powered sensors require significant structural compromises to the interior core of a guide wire, the company said. The company plans to use a passive sensor, which may offer improved maneuverability.

St. Jude Medical recently release its new Quantien FFR system, which gained FDA approval this spring. It is slated to replace the RadiAnalyzerXpress.

A recent trend in FFR has been wider adoption with its integration into existing hemodynamic systems, rather than use of a standalone FFR console. For example, St. Jude Medical said it has seen tremendous growth in sales of its wireless PressureWire Aeris platform when it is used with hemodynamic systems that have been upgraded to include FFR functionality. The integration allows for easier and faster start up of the FFR portion in the hemo system. These types of integrations help obtained fastest FFR results and easier integration into the patient record via the hemodynamic system.
Comparison Chart

This article served as an introduction for a comparison chart on FFR systems and FFR guide wires. The chart can be viewed by clicking on the "Comparison Charts" tab at the top of this webpage. The participants in the chart include: