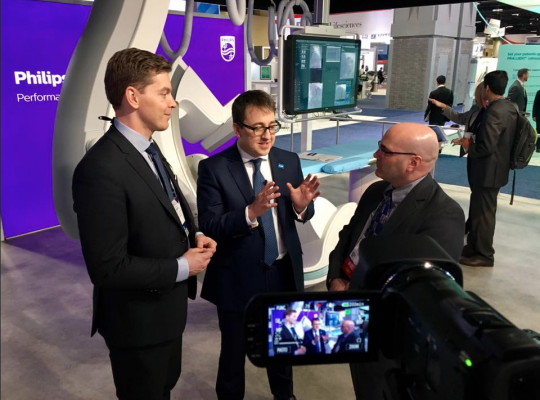 The studies, DEFINE-FLAIR and Instantaneous Wave-Free Ratio versus Fractional Flow Reserve guided intervention (IFR-SWEDEHEART), likely will have the biggest impact on patient care and new technology adoption of all the device-related studies presented at ACC.17. The two studies combined doubled the amount of clinical trial data on the use of both iFR and FFR. DAIC reader analytics during ACC.17 show iFR was the most popular device related late-breaking trial presented at the conference, with more interest than either the ABSORB or SURTAVI trials.

Despite being a recommended diagnostic tool for assessing the condition of the coronary arteries, FFR has been underutilized in practice, in part because it causes discomfort, chest pain and shortness of breath for many patients, researchers said. The study results suggest that iFR, which has emerged as a potential alternative to FFR, could offer the same benefits as FFR while avoiding its downsides. The studies showed no significant difference between iFR and FFR for the primary endpoint, which was in both trials a composite of all-cause mortality, non-fatal heart attack and unplanned revascularization (procedures used to unblock clogged arteries, such as angioplasty and bypass surgery), at 12 months. Both FFR and iFR are based on coronary physiology, a direct, internal measure of blood pressure within the arteries.

“Our study shows that it is safe to use either the iFR or FFR technique,” said Justin E. Davies, MBBS, Ph.D., consultant cardiologist at Imperial College London who led DEFINE-FLAIR. “I think iFR lowers the barriers to physiological measurement, which I believe is key to getting more people to use coronary physiology to guide coronary revascularization decision-making. iFR technology really enables ease of use; it’s very friendly for the physician and patients alike.”

DEFINE-FLAIR offers the first truly global test of iFR, involving sites in the United States, Europe, Africa, the Middle East, Asia and Australia. Although iFR has been validated in several smaller studies, the two new trials are the largest to date and the first to assess how using the method affects patient outcomes.

“In FFR we have a good diagnostic method, but people are not using it enough because of the side effects,” said Matthias Götberg, M.D., Ph.D., a cardiologist at Skane University Hospital in Lund, Sweden and lead author of the second study, IFR-SWEDEHEART. “Our study shows that for cardiologists who currently use FFR, iFR provides a similar clinical benefit but without patient discomfort. For cardiologists who are hesitant to use FFR, iFR might provide an opportunity to increase adoption rates of coronary physiology and benefit more patients.”

Cardiologists encounter patients with narrowing of the coronary arteries on a daily basis. They typically use angiography, a form of X-ray, as an initial tool to visually estimate the severity of narrowing, but it is difficult to accurately assess, based on a visual estimation alone, whether a stent is needed to widen the artery and allow the blood to move freely.

FFR is more precise and results in better outcomes than using angiography alone to assess narrowing of the coronary arteries, according to the researchers. With FFR, the doctor threads a thin wire through the coronary artery and measures the loss of blood pressure across the narrowed area. To acquire an accurate measurement, the patient must be given a drug that dilates the blood vessels (a vasodilator) during the procedure. This drug often causes discomfort; patients describe having difficulty breathing or feeling as if someone is sitting on their chest. The drug also adds to the cost of the procedure and can have other rare, but serious, side effects.

Like FFR, iFR is also based on coronary blood pressure measurements using a thin pressure sensor wire, but unlike FFR, it uses a mathematical algorithm to measure the pressure in the coronary artery only when the heart is relaxed and the coronary blood flow is high. As a result, a vasodilator drug is not needed.

Both studies enrolled patients who had stable angina or acute coronary syndrome (unstable angina or heart attack) and needed coronary physiology to inform treatment. Participants were randomly assigned to receive either iFR or FFR. For patients enrolling in the study after a heart attack, the studies only included data related to blockages other than the one that caused the heart attack. Patient outcomes were tracked for 12 months. For DEFINE-FLAIR, researchers enrolled 2,492 patients at 49 centers in 17 countries. Half of the patients received iFR and half received FFR.

For IFR-SWEDEHEART, researchers enrolled 2,037 patients at 15 centers in Sweden, Denmark and Iceland. A total of 2,019 patients in this study were treated according to protocol, with 1,012 patients receiving iFR and 1,007 receiving FFR.

IFR-SWEDEHEART revealed a substantial reduction in patient discomfort, with just 3 percent of iFR patients reporting discomfort in a post-procedure questionnaire compared to 68 percent of FFR patients.

“If patients could choose between the two methods, given that there is no difference in outcomes, patients would probably appreciate not having to experience the side effects of the vasodilator,” Götberg said.

Both studies also revealed a substantial difference in the number of significant atherosclerotic lesions found using iFR versus FFR, likely a result of subtle differences in the physiological basis of how the two approaches work and their slightly different thresholds for determining when stenting is required, according to the researchers. In IFR-SWEDEHEART, significant lesions were found in 29.2 percent of patients undergoing iFR and 36.8 percent undergoing FFR. A similar pattern was reflected in DEFINEFLAIR, in which stents were used in 46 percent of patients receiving iFR and 50 percent of patients receiving FFR.

DEFINE-FLAIR also revealed that the use of iFR significantly reduced the overall length of the procedure, from an average of 45 minutes for FFR to 40.5 minutes for iFR. The combination of a reduced procedure length, fewer stents being used and the elimination of the need for a vasodilator drug could translate into significant cost savings with iFR, Davies said.

“The study provided a very good, real-world snapshot of the time it takes to actually get a patient in, do the physiological assessment, do the stenting if necessary, and finish,” Davies said. “iFR is quicker and results in fewer stents, which is likely to lead to significant reduction of cost.”

Both studies were simultaneously published online in the New England Journal of Medicine at the time of presentation. The abstract for iFR-SWEDEHEART can be accessed at www.nejm.org/doi/full/10.1056/NEJMoa1616540?query=featured_home. The abstract for DEFINE-FLAIR can be accessed at www.nejm.org/doi/full/10.1056/NEJMoa1700445?query=featured_home

Read more about iFR vs. FFR in clinical practice in the article "FFR and iFR in the Diagnosis and Treatment of Heart Disease."