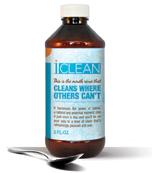 As the label says it, \"cleans where others can't,\" might be an understatement if it is proven in further study that iodine-based mouthwash can truly lower LDL cholesterol levels.

Cleaning your mouth and cleaning your arteries could be as simple as a once-a-day oral rinse if additional clinical studies confirm preliminary findings about a new product. The Biomedical Development Corp. (BDC) presented data in April to the American Academy of Oral Medicine showing that its oral rinse was safe and effective at fighting gingivitis in a recent clinical trial. But the most surprising finding of the study was that users of the oral rinse showed significantly lower LDL cholesterol levels than the placebo group.

“We didn’t expect to see any difference in LDL cholesterol,” said Charles Gauntt, the study’s principal investigator. “We expected to see improvements in oral health, and we did. But we also monitored a number of biological markers for inflammation. The results showed the oral rinse had no adverse effects and users exhibited lower levels of LDL, or what many people know as bad cholesterol. This definitely merits further study.”

The three-month, phase II trial was funded by the National Heart, Lung and Blood Institute (NHLBI). The trial was preceded by a phase I clinical trial for safety and a phase II pilot efficacy clinical trial. Another, longer phase II trial is now under way and will evaluate gingivitis patients over a six-month period. This new trial, conducted by the Center for Oral Health Research at the University of Kentucky, will monitor gingivitis and LDL cholesterol levels as the previous trial did.  The NHLBI is funding the research, which is also supported by the Kentucky SBIR/STTR Matching Funds Program.

BDC’s product is designed as a once-daily, 30-second oral rinse. The active ingredient is a proprietary formula based on iodine. The National Institutes of Health (NIH) Office of Dietary Supplements fact sheet on iodine addresses a variety of important roles for iodine in the human body, from helping the thyroid function properly to appearing to play a part in the body’s immune response system. About 40 percent of the world’s population is thought to be at risk of iodine deficiency.

Gauntt also notes that iodine is known to be effective in inactivating viruses, bacteria and fungi. He is intrigued by recent clinical studies showing what appears to be a closer link between oral health and cardiovascular health. Although scientists cannot yet fully explain how the two are connected, there is ample statistical evidence to suggest that gum disease and heart disease are closely related. According to the American Academy of Periodontology, people with periodontal disease (gum disease) are almost twice as likely to have coronary artery disease. The academy also notes that one study showed stroke victims were more likely than the general population to also have oral infections.

Gauntt believes that future research might make it much clearer that a healthy mouth, free of gum disease and its associated toxins and bacteria, is critical to a healthy cardiovascular system. Although further study is required, he believes BDC’s oral rinse may eventually prove to be an important tool in keeping both mouths and cardiovascular systems healthy, in addition to proper nutrition and exercise.

Phyllis Siegel, CEO of BDC, said that while results of its ongoing clinical trials are pending, a specific formulation of the product called iClean Mouths, designed for general mouth cleaning, will soon be available.

The iClean Mouths mouth rinse retails online for $30 for an 8-ounce bottle.

The company anticipates additional scientific studies on the ability of the wash to reduce oral inflammation and may look to the private sector for funding of cholesterol-related research.