The mechanisms, predictors and avoidance techniques of no-reflow reperfusion 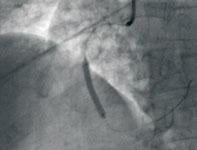 Coronary revascularization does not always lead to coronary reperfusion. When readily available, percutaneous coronary intervention (PCI) using primary balloon angioplasty, with or without use of stenting, is the standard of care for ST-segment elevation myocardial infarction (STEMI). However, there is a group of patients who seem not to benefit fully from prompt restoration of antegrade flow, as they fail to show resolution of the indirect signs of ischemia such as electrocardiographic (ECG) changes and improvements in perfusion abnormalities.[1,2] These patients also present an angiographic phenomenon characterized by evidence of slow-flow in the affected vessel (Thrombolysis in Myocardial Infarction [TIMI] flow equal to or less than 2) and lack of contrast uptake “blush” by the subtended myocardium, leading to a potential dissociation between coronary revascularization and myocardial perfusion in STEMI.

This condition is referred to as “no-reflow phenomenon.” [1,2] According to Kloner et al,[3] no-reflow is defined as suboptimal myocardial reperfusion through a part of coronary circulation without angiographic evidence of mechanical vessel obstruction.

Mechanism and Pathogenesis of No-Reflow
This unique phenomenon is still poorly understood. However, theories have been generated trying to explain it. Originally, it was thought prolonged ischemia and extensive myocardial damage led to micro-vascular (capillary bed) damage, resulting in incomplete reperfusion.[3,4] More recently, other factors have been thought to play a role in the development of no-reflow, specifically distal embolization of the plaque/thrombus following balloon inflation. This theory was supported by the observation that patients with no-reflow have significantly greater amount of embolic material (platelet–fibrin complexes, cholesterol crystals and macrophages) trapped in the distal protection device when compared to patients with normal reflow.[5]

Other factors that contribute, at least partially, in the pathogenesis of no-reflow include systemic inflammatory response, platelet/endothelial activation, micro-vascular vasoconstriction, myocardial edema, oxygen-derived free radicals and calcium overload. Systemic activation of inflammatory cells might enhance no-reflow, as suggested by the observation that raised serum levels of C-reactive protein (CRP) are associated with impaired coronary micro-vascular response to both endothelium-dependent and endothelium-independent vasodilator stimuli[6,7] and with enhanced trans-cardiac neutrophil activation.[8] Platelets may be implicated in no-reflow through several mechanisms, including micro-vascular obstruction by platelet aggregates and release of platelet-derived vasoactive and chemotactic mediators.[9]

In summary, the cause of no-reflow can be classified into four main pathogenetic components: distal athero-thrombotic embolization, ischemia-related and/or reperfusion-related injury, as well as the susceptibility of coronary microcirculation to injury.[10] Although the exact mechanism of no-reflow remains unknown, it is most likely complex and multi-factorial.

Because of the potential role of platelets in induction and perpetuation of no-reflow, mediators affecting platelet activation, such as thromboxane A2 (TXA2), might be involved in no-reflow. TXA2 is a key mediator of platelet activation and aggregation, and an important mediator of platelet-induced coronary artery constriction.[13, 14] Endothelin-1 (ET-1), a potent endothelium-derived vasoconstrictor peptide, might aggravate no-reflow by promoting reperfusion injury, triggering inflammatory response, and attenuating antioxidant defense.[15] In one study,[16] TXA2 plasma levels, ET-1 plasma levels and left anterior descending coronary artery (LAD) as the culprit vessel were significant predictors of angiographic no-reflow, whereas TXA2 and ET-1 plasma levels were the only independent predictors of lack of ST-segment resolution.

In another study,[17] patients with angiographically (TIMI flow equal to or less than 2), electrocardiographically (ST-resolution of less than 30 percent) and magnetic resonance imaging (MRI)-detected (presence of micro-vascular obstruction) no-reflow had significantly higher ET-1 level on admission. This was the only significant predictor of MRI-detected no-reflow together with left ventricular ejection fraction. An elevated ET-1 level was also a significant predictor of long-term mortality.

There are conflicting data about elevated serum levels of CRP (a marker of systemic inflammatory response) as a predictor of no-reflow. The association between elevated CRP level and no-reflow has not been consistently demonstrated.[11,12,18]

Prevention, Management
Although more research is much needed in this area and the precise pathophysiology is still to be determined, the simple application of the current standard-of-care can help prevent the development of no-reflow. These measures include reducing ischemic time (time-to-intervention) and administration of pre-procedural medications (aspirin, thienopyridine, heparin, beta-blocker, and high dose statin) in order to improve the micro-vascular integrity of the coronary bed.

The selective use of glycoprotein 2b-3a inhibitors and thrombectomy devices during intervention may be also appropriate in selected cases,[22] but lack of randomized controlled clinical trials remains a limitation to give specific guidelines. However, no-reflow can still occur even under the best provided care, which emphasizes the need for more specific mechanical and/or medical treatments. This is particularly true in the setting of an acute STEMI.  Various intracoronary vasodilators have been shown to work with a good deal of success including nicardipine, nitroprusside and verapamil. The longer-acting drugs are somewhat limited by systemic hypotension and/or significant negative inotropy, both of which are of particular importance in the acutely ischemic heart.  Two drugs in particular (nitroprusside and adenosine) have been studied as possible adjuncts to reperfusion therapy in multiple trials, including AMISTAD,[23, 24] ATTACC,[25] ADMIRE[26] and others.[27]

However, none of these studies has been performed in the setting of thrombus aspiration. The REOPEN-AMI (Randomized evaluation of intracoronary nitroprusside versus adenosine after thrombus aspiration during primary PCI for the prevention of no-reflow in acute myocardial infarction) study,[28] which is currently ongoing, should provide important data on the efficacy and safety of these vasodilators for prevention of no-reflow.

Conclusion
The no-reflow phenomenon remains a significant challenge for STEMI patients. It is associated with poor prognosis that is independent of and beyond that provided by other relevant clinical factors including the infarct size. Although we have a number of drugs and devices to treat the no-reflow phenomenon, there is an increasing need for continuation of research to better understand, prevent and treat this unique phenomenon in patients with STEMI undergoing primary PCI.

Editor’s note: Mark Michael, M.D., is chief fellow at the Krannert Institute of Cardiology, Indianapolis. Jeffrey A. Breall, M.D., Ph.D., is a professor of clinical medicine and director of the cardiac catheterization laboratories and interventional cardiology at the Krannert Institute of Cardiology. Breall also serves on the Editorial Advisory Board for Diagnostic & Interventional Cardiology.