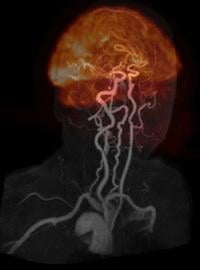 The new imaging modality of positron emission tomography (PET)/magnetic resonance imaging (MRI) was introduced to the U.S. market in June. The Siemens Biograph mMR (molecular MR) gained U.S. Food and Drug Administration (FDA) 510(k) clearance as the first dedicated PET/MRI system. It is the only system to combine both modalities into one machine, allowing simultaneous imaging of location, function and metabolic activity of organs in a single image.

“The Siemens PET/MRI system allows two tests to run simultaneously without having to move the patient to a different scanning system,” said Alberto Gutierrez, Ph.D., director of the Office of In Vitro Diagnostic Device Evaluation and Safety in the FDA’s Center for Devices and Radiological Health. “Minimizing changes in a patient’s position between tests allows physicians to compare images more easily and helps them get the most accurate information possible.”

Additionally, the Biograph mMR system allows physicians to acquire images at a significantly lower radiation dose compared with PET/CT. Although the radiation dose from the PET exam remains unchanged, MRI does not use ionizing radiation.

Promising Future for New Modality
“PET/MR is likely to have a major impact in the future, as PET/CT did when it was introduced,” said Michael Graham, M.D., Ph.D., director of nuclear medicine, University of Iowa, during a press conference on key molecular imaging research at the 2011 Society of Nuclear Medicine (SNM) meeting in June. “I think we will see this technology proliferate over the next few years.”

He said it might be used to image complex soft tissue, such as the brain, head, neck and the pelvis. It also will be very appealing for pediatric imaging to help reduce radiation dose from CT scans.

Graham said the Siemens PET/MRI system is a major departure from previous PET systems. Traditional photomultiplier tubes could not be used because of the immediate proximity of the MR magnets. Instead, Siemens uses avalanche photodiodes (APDs), new types of detectors that use ceramic instead of metal.

Another development that facilitated a combined scanner was larger bore sizes. The 70 cm-bore MRI systems introduced in recent years provide the additional space to install the PET detectors, which reduces the bore size back down to about 60 cm.

The Siemens system allows completely simultaneous imaging of both anatomy and function, which cannot be done in either the Philips or GE solutions. This exact coordination in images may enable new avenues of clinical research.

Siemens representatives are quick to point out there are no time savings or benefits in using two separate devices and creating two separate imaging exams and then merging them. They say that type of exam can take 60 to 90 minutes, whereas the Siemens mMR can do the same imaging at the same time in about 30 minutes. The company said it is similar to an MRI exam, except with the addition of an FDG injection for PET.

New types of artifacts will be encountered with PET/MRI systems due to the MRI coils. Siemens says using the coils built into the mMR system table is not an issue, because the system’s software has already mapped these coils and will correct their image artifacts. However, the use of movable coils may present artifacts. This artifact issue is overcome in the GE and Philips approaches by separating the imaging systems.

Philips Approach
The Philips Ingenuity TF PET/MR gained European CE mark in January 2011 and is pending FDA 510(k) clearance, with a system being used for investigational purposes at Mt. Sinai Hospital. The company hopes FDA clearance will come some time in 2011.

Philips Healthcare created a system that uses separate PET and MRI scanners located in the same room. The innovation is the use of an automated table gantry. The system images the patient on the MRI and then rotates 180 degrees to image the patient in the PET scanner. The mobile table allows imaging without moving patients from one table and scanner to another, which can lead to misalignments on the merged hybrid images.

The system requires more space than a single MRI or PET scanning room, taking the space of one-and-a-half to two rooms.

GE Healthcare’s Approach
Instead of developing a dedicated PET/MRI system, GE developed a mobile patient table that is transferred between its PET/CT and MRI scanners for registered, tri-modality imaging. The table loads into each scanner using a set of identical rails.

Vivek Bhatt, general manager, PET/CT, GE Healthcare, said GE took the approach of examining the clinical value of PET/MRI first, without spending a lot of time and money to develop a standalone system. He said a definite need has to be established, and the system offers a cost-effective research solution using hospitals’ existing GE scanning equipment.

Video Introduction to PET/MRI
Hear about the advances in PET/MRI from the floor of the 2011 Society of Nuclear Medicine (SNM) where Siemens, Philips and GE showcased this technology. The link is: http://bit.ly/petmrintro 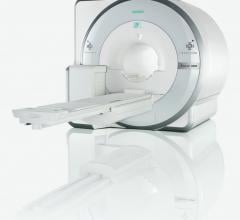 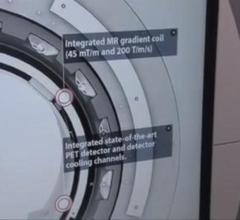