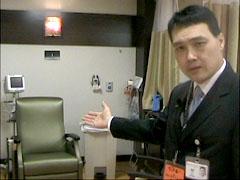 Transradial access is slowly gaining ground in the United States as more physicians make the switch due to greatly reduced bleeding complications, increased patient comfort and earlier ambulation. St. Joseph’s Hospital of Atlanta is a big supporter of radial access and has taken the concept a step further by creating the first transradial recovery lounge in the country.

A trend in medical facility design over the past 15 years has moved away from the sterile, institutional look of traditional hospitals. Instead, more inviting, warm and friendly looking facilities are being built to make patients feel more comfortable. This concept is now being applied to the cath lab recovery room. Use of radial access allows for immediate ambulation, and thus a major revision to recovery room design, replacing beds with couches and recliner chairs.

St. Joseph’s Hospital is the first in the United States to build a cafe-like lounge exclusively for radial access patients. Chen took the idea from Ferdinand Kiemeneij, M.D., department of interventional cardiology, Onze Lieve Vrouwe Gasthuis, Amsterdam, The Netherlands. He created the first radial access recovery room in Europe after getting the idea from a KLM airline lounge.

“The idea is to build a cafe-type atmosphere to reduce the anxiety associated with invasive heart procedures,” Chen said. “When I first approached the hospital administration with this idea, they required a bit of convincing. However, after seeing the patient satisfaction and alleviation of complications stemming from this technique, all were in agreement that this concept may well be the wave of the future.”

He said the hospital embraces the radial access approach as a new frontier in interventional cardiology and agreed to build the new recovery area. “To me, this rounded out the picture of a more patient-friendly cardiology program for what is essentially a minimally invasive catheterization/interventional procedure,” Chen said.

Patients sit in the lounge chairs for 30 minutes to an hour, only to recover from the sedation. The patients are then allowed to ambulate in their street clothes. They can walk around or sip a cappuccino, Chen said.

The recovery room has comfortable reclining chairs instead of beds and there are couches and coffee tables topped with magazines and newspapers. The recliners have attached swing-up tabletops where patients can put a laptop computer and check their e-mail or surf the Internet. The idea is to eliminate the sterile, institutional appearance of most recovery rooms and to relax the patient with a more inviting atmosphere.

“We are trying to take the hospital out of the equation,” Chen said. “Patients are much more at ease than they would be in a typical hospital setting. To allow them to put their street clothes on really reduces the anxiety they have.”

The lounge was showcased and visited by many cardiologists from around the country during the American College of Cardiology (ACC) Annual Scientific Sessions in March 2010, which were held in Atlanta.