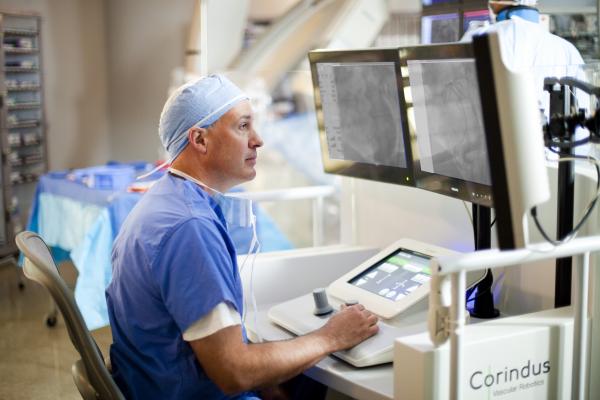 In the current healthcare economic climate of evaluating “nice vs. necessary” spending for new technology, adoption of robotic catheter navigation systems has its fair share of critics and supporters. Operators already perform procedures manually without robotic assistance, but advocates for the technology point out these systems can greatly improve staff safety by reducing radiation dose and improve outcomes with more accurate procedural navigation.

“It’s really a natural extension of your skills,” Mahmud said. “I thought losing the tactile feel on the wires would be a problem, but I found the robotic system enhances wire manipulation and fine motor movements.”

While precision is a large part of why he wanted to adopt the system, it was the big reduction in radiation dose that really attracted him. Improving workplace safety is currently a big trend at hospitals, and Mahmud said it is hard to argue against the value of a robotic system to improve staff safety in the cath lab. He said the PRECISE Trial for the CorPath system showed a 95 percent reduction in physician radiation dose.

All robotic systems currently on the market (one system for PCI, one for peripheral vascular work and two for electrophysiology (EP) procedures) use a remote control console that allow a physician to be removed from the angiographic imaging system’s radiation field. The CorPath system uses a lead lined booth that can be positioned anywhere in the cath lab and allows the operator to work in a seated position without the need to wear any lead.

Radiation dose in the cath lab has become a major concern in recent years and has become a big topic with the Society for Cardiac Angiography and Interventions (SCAI). “As a professional society, we are starting to pay attention to radiation safety and are starting to consider the long-term safety of cardiologists,” said Vijay Iyer, M.D., Ph.D., director of the complex valve clinic, interventional cardiologist, Buffalo General Medical Center, Buffalo, N.Y. “We really need to focus on the younger generation of interventional cardiologists who are very aware of the radiation issues.”

Buffalo General Medical Center has been using the CorPath robotic system for about six months. Iyer was the physician who advocated bringing the system to the hospital. After years of long hours standing wearing lead aprons in the cath lab, he is beginning to have issues with his back. These aches and pains got him thinking about the longevity of his career and workplace safety in regard to unseen dangers of constant radiation exposure, and orthopedic issues common among interventionalists.

“You spend a lot of time in the cath lab with lead on and as the procedures become more complex, the procedure times are increasing,” Iyer said. “There is a cost to buying a robotic system, but it is difficult to calculate the return on investment for the clinical staff. The human cost you just cannot calculate.”

He approached the hospital administration about acquiring a CorPath robotic system as a way to improve staff and physician safety and to potentially improve procedural accuracy. For many of the hospitals that have installed a CorPath system, it is often the staff safety element that is the primary reason for purchasing these systems.

While the CorPath robotic system was designed to improve catheter guidance and measurements, users and skeptics of robotic systems say clinical data on its utility so far has been mainly limited to simple lesions, not in complex lesions or anatomy. However, users of the system say the potential of the CorPath is not in the simple lesions used for clinical trials to gain U.S. Food and Drug Administration (FDA) approval, but in the much more complex interventions for which this system is destined to be used in the coming years.

“Part of our challenge is not that you can do a procedure with the robot, but finding the best cases where to use the system,” Iyer said.

The first CorPath case Iyer performed was a bifurcation lesion in a left anterior descending (LAD) diagonal branch. He used the robot to navigate both a scoring balloon and a dilatation balloon into the branch vessel. He then stented the LAD. His second case was an acute myocardial infarction (AMI) with a complete clot occlusion. He first manually positioned an Impella percutaneous heart pump and then used the robotic system to perform PCI. Iyer said he performs most of his procedures via radial artery access.

Mahmud performed two live robotic cases in July during the San Diego Cardiovascular Interventions (SDCI) conference — one involving Impella support and the other requiring multiple wires to protect a side branch — demonstrating the system can be used for more complex procedures.

Corindus said many of the centers with CorPath systems are routinely using the system for more complex cases and data is being gathered for publication.

Iyer said the robot might potentially lower healthcare costs by helping reduce the number of stents required. He explained procedural accuracy is greatly improved because of the exact measurements of lesions and the precise millimeter-increment catheter manipulations via its joystick controls. Operators say the system helps reduce the number of stents used in patients due to geographic miss, where an expanded stent fails to cover all of a lesion so a second stent is required. Corindus created a program where it will pay hospitals $1,000 for each additional unplanned stent that is needed if the sizing with the CorPath is incorrect.

“I have not had a case yet where I needed two stents, except one long lesion where we did not have a single stent long enough to cover the lesion,” Iyer said. “The system is extremely accurate.”

The CorPath also has changed the workflow in Iyer’s lab, where he now asks staff for a specific length, not a specific brand. Iyer said he no longer cares which manufacturer’s stent is used, since the length is really what matters and the stents today all have similar outcomes.

For measurements, operators use the radio-opaque markers on balloons or guide wires. They perform wire pull back over the length of the lesion and note the millimeter increments measured by the system. Operators who use the system say this method is much more accurate than the traditional eyeball estimates.

Angiograms are still performed manually with the system and it does take additional time to set up the robotic system, adding between three to six minutes on average to the procedure. Data from the PRECISE Trial showed the average procedure time was 24 minutes, plus or minus 14 minutes.

Iyer said during busy days and especially with cases involving very simple lesions, he will skip using the robot. “For simple type A lesions that are easy and fast, I think it is still best to do these manually, because there is not much benefit in radiation dose reduction from using the robot. The cases where we may see the most benefit are the more complex cases, but these are where we are using the system the least. I think the more comfortable we get with the system, the more we will use the system for those complex lesions,” he explained.

Iyer does try to dedicate one day a week to just performing robotic cases to gain more experience with the system. “On these days, it does not matter to me if it is an easy or complex case, I will use the system for both types,” he said. He said a couple other operators at his hospital are now trained and starting to use the system on a regular basis as well.

Advice on Starting a Robotic Program

When a center is considering creation of a robotic system, Mahmud said it is important to have a physician champion for the technology and to use a heart team approach to treatment. “If you do not have a champion to support this, then it will not work,” he explained.

Iyer said since the system is designed and indicated for PCI, it should be installed in a dedicated PCI lab, not for a hybrid lab where various types of procedures are performed.

Stereotaxis introduced the first robotic system, the Niobe Remote Magnetic Navigation System, in 2005. The system is cleared in the United States for EP ablation, coronary, peripheral and neurovascular navigation. It uses two large electromagnets on either side of the patient table to guide magnetic catheters remotely during complex procedures. In 2011, Stereotaxis introduced Epoch, a modular platform for faster, more efficient and dynamic magnetic catheter control. The company also offers Vdrive, a mechanical robotic platform for remote manipulation of an array of catheter devices.

Hansen Medical was the second company to enter the market with its Sensei EP ablation procedure navigation robotic catheter system. The Sensei X2, released in 2014, is the third generation Sensei system released in the United States. Hansen’s Sensei robotic technology has been used in more than 14,000 patients since its commercial release.

In 2013, Hansen gained FDA-clearance for its Magellan Robotic System, intended for catheter navigation in peripheral endovascular and interventional radiology procedures. The system enables improved procedural predictability, control and catheter stability during navigation of the peripheral vasculature to provide a guide wire conduit for manual placement of therapeutic devices to treat vascular disease. In 2014, the company gained FDA-clearance for the Magellan Transport System, which enables the Magellan robotic arm to easily be transferred between procedure rooms.

IMRIS Inc. developed the Symbis surgical system, a minimally invasive and magnetic resonance imaging (MRI)-compatible microsurgical robot system. The system is designed to work with MR imaging instead of angiography to eliminate X-ray radiation exposure. It uses physician-operated robotic arm manipulation with integrated high-definition 3-D anatomical and MR imaging views. It was originally developed to enable brain micro-surgery, but might have future application as an interventional lab replacement imaging system. The company declared bankruptcy earlier this year and its assets are currently in the process of being sold to a technology investment firm.