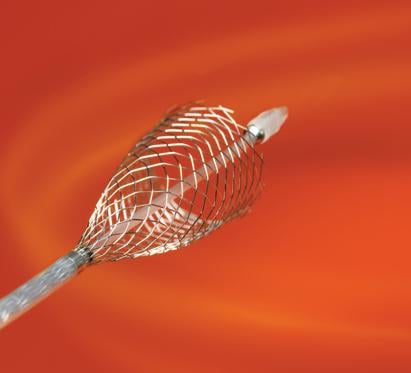 July 13, 2015 - Hospitals performing carotid artery stenting vary considerably in rates of in-hospital stroke or death, according to a study published in JACC: Cardiovascular Interventions. Those rates can range from 0 to 18 percent overall, and from 1.2 to 4.7 percent when accounting for variation in health of patients at admission.

Using data from the American College of Cardiology's CARE Registry, the largest national registry of carotid artery stent patients, researchers assessed 19,381 procedures from 188 hospitals that each performed more than five carotid artery stenting procedures between 2005 and 2013. The study was led by Beau M. Hawkins, M.D., a cardiologist at the University of Oklahoma Health Sciences Center, and Robert W. Yeh, M.D., a cardiologist at the Massachusetts General Hospital.

Carotid artery stenting is a procedure that involves inserting a mesh stent to hold open an artery after a blockage is cleared.

For patients with similar risk profiles, the odds of suffering stroke or death differ by about 50 percent from one facility to another, pointing to a substantial range in quality among hospitals performing this procedure, according to the study authors.

Results showed that the average rate of stroke or death across all patients in the study was 2.4 percent, with death or stroke rates among participating hospitals ranging from 0 to 18.8 percent. Variation is common with many cardiovascular procedures because some hospitals treat sicker patients, which could explain poorer outcomes in those facilities.

To account for differences in the patient mix, researchers did a second analysis that adjusted for variation in risk factors, including age, prior stroke, impending major surgery, and the presence of a heart flutter. Adjusted death and stroke rates ranged from 1.2 percent to 4.7 percent.

Unlike other studies, this analysis did not find a connection between procedural volume and outcomes. The authors suggest that this difference may be the result of therapeutic advances such as blood-clot protection devices and improved patient selection. They also speculate that hospitals participating in this study may have more comprehensive measures in place to promote patient safety, or they may have more rigorous credentialing standards for providers performing carotid artery stenting.

Hawkins and Yeh noted that "our findings are important because they demonstrate that carotid stenting is being performed with good results across a large number of hospitals in the United States. However, our analyses also suggest that some hospitals are achieving better outcomes than others, and it will be important to identify the reasons for this so that all centers offering this therapy can achieve exceptional outcomes."