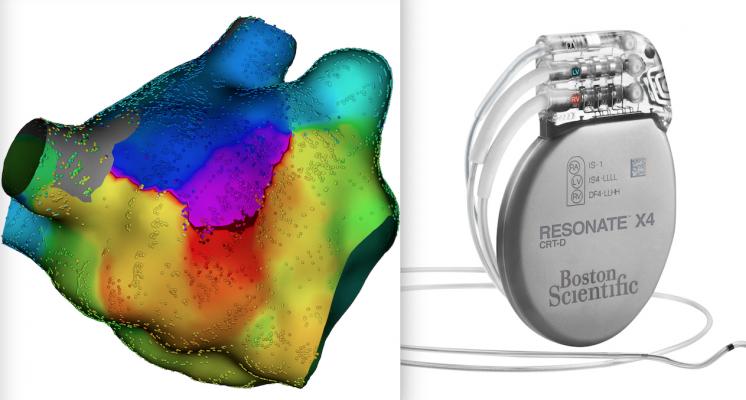 September 13, 2021 — Ablation plus cardiac resynchronization therapy (CRT) is superior to pharmacological rate control in reducing mortality in severely symptomatic permanent atrial fibrillation (AF) patients with a narrow QRS, according to the late-breaking APAF-CRT trial presented in a Hot Line session at the European Society of Cardiology (ESC) Congress 2021 and published in the European Heart Journal.[1,2]

“We hypothesize that the observed benefit was due to the combination of the strict rate control and rate regularization achieved by AV junction ablation, together with biventricular pacing which counteracted the adverse effects of right ventricular pacing. The improvement in survival shown by the APAF-CRT trial supports ablation plus CRT as a first line therapy in patients with permanent AF, narrow QRS and previous hospitalization for heart failure,” explained principal investigator Professor Michele Brignole of the IRCCS Istituto Auxologico Italiano, San Luca Hospital, Milan.

APAF-CRT was a two-phase trial in patients with severely symptomatic permanent AF and a narrow QRS. The first phase, focused on morbidity, showed that AV junction ablation and CRT reduced hospitalization due to heart failure and improved heart failure symptoms compared with pharmacological rate control at two years of follow-up.[5]

Results of the second phase, focused on mortality, were presented at ESC 2021. In a larger population with a longer follow-up, the trial tested the hypothesis that AV junction ablation and biventricular pacing is superior to pharmacological rate control therapy in reducing all-cause mortality.

This was a multi-center, international, prospective, randomized, parallel, open-label trial with a blinded outcome. Patients were enrolled with the following inclusion criteria: severely symptomatic permanent AF (over six months) considered unsuitable for AF ablation or in whom AF ablation had failed; narrow QRS (110 ms or below); and at least one hospitalization for heart failure in the previous year.

Patients were randomly assigned in a 1:1 fashion to AV junction ablation and biventricular pacing (ablation + CRT arm) or optimal pharmacological rate control therapy (drug arm). Patients in both arms could additionally be given a defibrillator at the discretion of their physician according to ESC guidelines.6

A total of 133 patients were randomized. The mean age was 73 years and 62 (47%) were women. The trial was stopped for efficacy at the interim analysis after a median of 29 months of follow-up per patient.

Moreover, AV junction ablation and CRT reduced the secondary endpoint of the combined risks of death from any cause or hospitalization for heart failure by 60% (95% CI 0.22–0.73; p=0.002).