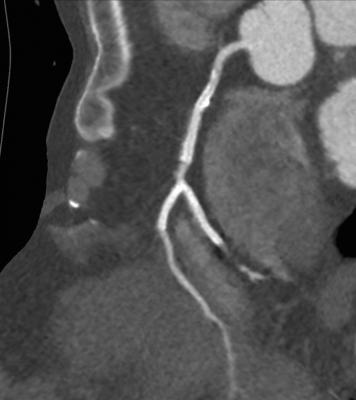 November 1, 2017 — The double kissing (DK) crush two-stent technique was associated with a lower rate of target lesion failure at one year compared with provisional stenting (PS) in the treatment of true distal bifurcation lesions of the left main artery, according to a large-scale randomized trial.

Findings were reported at the 29th annual Transcatheter Cardiovascular Therapeutics (TCT) scientific symposium, sponsored by the Cardiovascular Research Foundation (CRF), Oct. 29-Nov. 2 in Denver. The study was also simultaneously published in the Journal of the American College of Cardiology.

“In this trial, PCI of true distal LM bifurcation lesions using a planned double kissing crush two-stent strategy resulted in a lower rate of TLF at one-year compared to provisional stenting,” said Shao-Liang Chen, M.D., Ph.D. Chen is director of cardiology and cath lab at Nanjing First Hospital, vice president of Nanjing First Hospital, Nanjing Medical University, and professor of internal medicine and cardiology at Nanjing Medical University in Nanjing, China. “These results indicate that double kissing crush may be a better option for these patients.”

The DKCRUSH-V trial was funded by a grant from the National Science Foundation of China (Funding no.: NSFC 91639303), and jointly supported by Nanjing Municipal Medical Development Project, Microport, Abbott Vascular and Medtronic. Chen reported nothing to disclose.