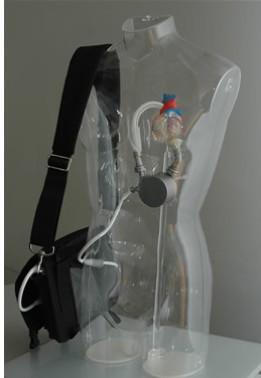 July 19, 2011 — Terumo Heart Inc., a wholly owned subsidiary of Terumo Corp., announced that a patient implanted with the DuraHeart left ventricular assist system (LVAS) has surpassed five years of support on the mechanical circulatory support device. Helga Gieseke, living in Germany, was treated at The Deutsches Herzzentrum Berlin (DHZB, German Heart Institute Berlin) and is now one of the longest-living heart failure recipients of the DuraHeart LVAS device.

"Now I can breathe again,” she said. “For years before I received the DuraHeart I was unable to do anything with my children or grandchildren. Since the DuraHeart, I was able to experience the birth of my little grandchild. I can now do things like walk and play catch and am able to participate in the lives of my family."

Gieseke's heart problems have been occurring since the 1980s; her first heart surgery was performed in 1994. Between 1994 and 2006, she underwent several procedures including implantation of stents, pacemakers and implantable defibrillators in an attempt to manage her condition. Despite all these treatments, Mrs. Gieseke's condition continued to deteriorate until she found herself unable to walk or carry out simple activities without experiencing chest pain and being short of breath.

Gieseke admits that without the DuraHeart, she would probably not have lived to see her most recent birthday. "DuraHeart was my only option; there is a shortage of donor organs, and DuraHeart was my last chance. My family supported my decision [to implant an investigational device] and we have all been extremely happy with the decision and the quality of life the DuraHeart has afforded me."

The system is the latest-generation rotary blood pump designed for long-term patient support. The system incorporates a centrifugal flow rotary pump with the magnetically levitated impeller. The pump features three position sensors and electromagnetic coils that suspend the impeller inside the pump chamber without a single contact point. The impeller's active magnetic levitation is designed to eliminate friction by allowing a wide gap between blood contacting surfaces, enabling blood to flow through the pump unimpeded in a smooth, non-turbulent fashion.

The DuraHeart carries a CE mark and is currently available for sale in Japan and Europe. It is limited to investigational use only in the United States.