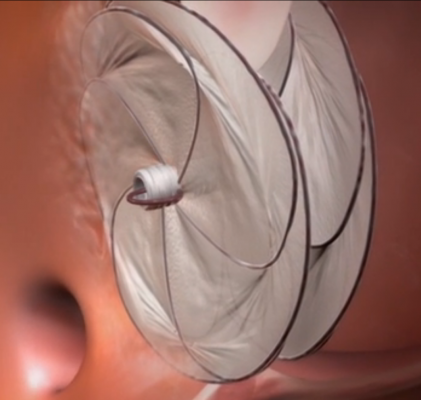 May 24, 2017 – W. L. Gore & Associates (Gore) announced positive results from its REDUCE Study assessing closure of patent foramen ovale (PFO) for the reduction of recurrent ischemic stroke and new brain infarct. The data were shared May 16 at the European Stroke Organisation Conference (ESOC) in Prague, Czech Republic. Gore plans to submit the positive data to the U.S. Food and Drug Administration (FDA) to seek a PFO indication for the Gore Cardioform Septal Occluder by year-end 2017.

“The REDUCE data is groundbreaking for patients who have suffered a cryptogenic stroke attributed to a PFO,” said Scott Kasner, M.D., neurologist in the Perelman School of Medicine at the University of Pennsylvania, and U.S. neurology national principal investigator for the REDUCE Study. “Until now, there has never been a study of a PFO closure device that showed statistically significant reduction in stroke recurrence in the primary intent-to-treat analysis. Other PFO closure device trials had to rely on secondary analysis, including following patients for up to a decade, before achieving statistical significance. Also of note is the level of safety the Gore Cardioform Septal Occluder demonstrated, with no significant difference shown in the rate of serious adverse events between patients implanted with the device and those in the control arm. This trial demonstrates noteworthy verification that PFO closure with the Gore Cardioform Septal Occluder is a valuable procedure to reduce recurrent stroke and brain infarct when utilized in an appropriate patient population.”

Watch a VIDEO demonstration of how the Cardioform is implanted.

The controlled, open-label REDUCE study assessed the efficacy and safety of PFO closure using Gore Septal Occluder Devices in 664 randomized subjects, ages 18 to 59 with a history of cryptogenic stroke, across 63 investigational sites in seven countries. The trial met its primary endpoint by showing a statistically significant, 76.6 percent (p = 0.001), reduction in recurrent ischemic stroke in patients that underwent PFO closure in conjunction with antiplatelet therapy versus those who underwent antiplatelet therapy alone after an average of 3.4 years follow-up.

The data showed no difference in the subject-based rate of serious adverse events between test and control groups. Device- and procedure-related serious adverse events occurred in 1.4 and 2.5 percent, respectively, of test patients. Patients experienced low rates of bleeding, deep vein thrombosis, and pulmonary embolism, with no significant difference between test and control groups.  There was a significantly higher rate of serious atrial fibrillation in the test group (2.3 percent versus 0.4 percent) but the majority of atrial fibrillation was peri-procedural (80 percent had onset within 30 days of the closure procedure) and had rapid resolution (70 percent with resolution within two days of onset).

Most people with a PFO — a hole occurring in the upper wall between the left and right atria of the heart — do not experience any issues when blood flows from one atrium to the other; however, serious problems such as stroke can arise if a blood clot passes from the right to left atria through a PFO and then to the brain. The data from the REDUCE Study suggest the risk of recurrent stroke can be dramatically reduced when the PFO is closed using Gore Septal Occluder Devices.

The Gore Cardioform Septal Occluder is inserted through a catheter that is placed in a leg vein and advanced to the heart. In the U.S., the device is currently approved for closure of atrial septal defects (ASDs), and is under investigation for the closure of PFOs. It is designed with two independent conformable discs that span and cover the anatomy. The minimal wire frame of the device provides optimal apposition to the anatomy and is covered in Gore’s proprietary, thromboresistant ePTFE material, allowing tissue ingrowth for short-and long-term performance.

Read the article “AAN: PFO Closure Not Recommended for People with Heart Defect and Stroke.”