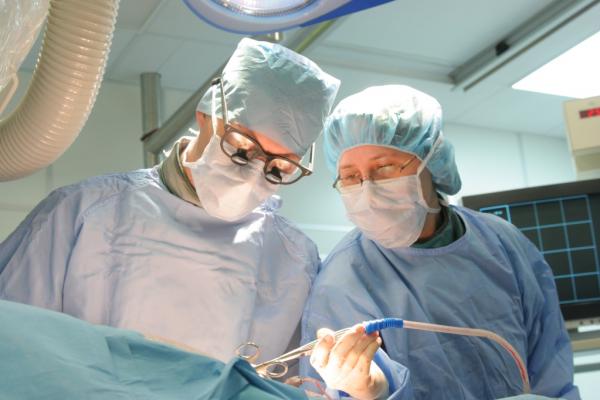 A third to half of the patients who undergo either coronary artery bypass surgery or heart valve replacement surgery every year in the United States will develop atrial fibrillation, or AFib, an abnormal heart rhythm. Compared with patients who do not get AFib, those who develop the abnormal heart rhythm during the first 60 days after surgery have longer hospital stays, an elevated risk of stroke, other adverse events and complications, and a higher risk of death.

“For the primary endpoint of total number of days in the hospital from the date that therapy was started until 60 days after beginning treatment, we found that for the stable post-surgical patient, rate control and rhythm control are both acceptable strategies,” said Marc Gillinov, M.D., a cardiac surgeon at the Cleveland Clinic and lead author of the study. “This is important because it means that the choice of strategy can be determined by what is clinically preferable for the individual patient.”

It is estimated that treating post-operative AFib adds about $1 billion a year to the nation’s healthcare costs, Gillinov said. “We do not have a reliable, generally accepted way of preventing AFib in this patient population, and there had never been a large trial to determine whether one of the two ways of treating it was better than the other,” he said. This trial was designed to fill that gap.

The study was conducted at 23 academic medical centers in the United States and Canada. It enrolled 2,109 patients who were about to undergo either bypass or valve replacement/valve repair surgery. Patients who had either one episode of AFib lasting more than 60 minutes or more than one AFib episode during the first seven days after surgery were eligible to be randomly assigned to one of the two study treatments. The 523 patients who developed post-operative Afib were randomly assigned to either heart rate control treatment with beta blockers or heart rhythm control treatment with the drug amiodarone with or without electrical cardioversion to restore normal rhythm. All patients who had recurrent AFib or whose AFib lasted more than 48 hours were considered for treatment with the blood-thinning drug warfarin. Patients were 68 years old on average and 75 percent were male. The follow-up period was 60 days after surgery.

“We have shown that post-operative AFib will resolve in more than 90 percent of patients who are treated with either rate control or rhythm control,” Gillinov said. “Patients and physicians now have the option to choose the strategy that’s best for each individual patient.”

In selecting a treatment strategy, physicians need to consider the potential toxicity of amiodarone and the possible need for cardioversion, which is performed under general anesthesia, he said.

The study’s main limitation was that about 25 percent of the patients in each group did not complete their assigned treatment and were switched to the other treatment group, Gillinov said. The study also did not have the statistical power to detect any differences in outcomes between patients who received warfarin and those who did not. This question may be the focus of a follow-up study, he said.

The trial was conducted by the Cardiothoracic Surgical Trials Network, which is funded by the National Heart, Lung and Blood Institute, the National Institute for Neurological Disorders and Stroke and the Canadian Institutes for Health Research.

This study was published online in the New England Journal of Medicine simultaneously with the presentation.