Statins May Bring Benefits at Time of Treatment for Heart Attack, Angina 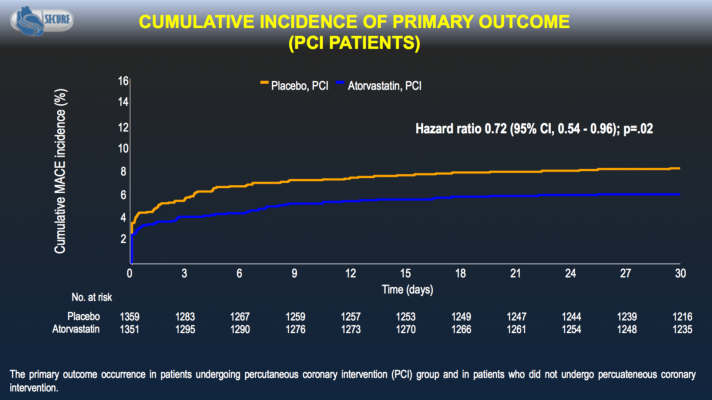 March 20, 2018 — Getting a large dose of a statin did not have an impact on major adverse cardiac events among a broad population of patients slated to undergo percutaneous coronary intervention (PCI), a procedure to clear blocked arteries, in a trial being presented at the American College of Cardiology’s 67th Annual Scientific Session. However, statins did significantly reduce the rates of such events among the subset of trial participants who actually underwent PCI.

PCI is one of several treatments for people with acute coronary syndrome, an umbrella term that encompasses heart attacks and unstable angina (acute chest pain caused by narrowed arteries). The procedure involves threading a thin wire to the site of the blockage and then inflating a small balloon to open the artery and improve the flow of blood to the heart. In this trial, patients were randomized to receive either a placebo or a “loading dose” of a statin, consisting of two double-doses administered the day before and the day after a scheduled PCI, followed by a daily low-dose of a statin for 30 days.

The trial is the largest study to date aimed at testing the hypothesis that statins could help reduce cardiovascular events around the time of PCI. More than 4,100 patients were enrolled in the trial at 58 centers in Brazil. All patients had acute coronary syndrome for which doctors planned to perform PCI within seven days. However, about one-third of the study participants ultimately did not receive PCI because doctors opted to perform other treatments, such as coronary artery bypass grafting (a heart bypass).

Participants in this study were reflective of the broader population of people with acute coronary syndrome, and the study protocols were reflective of common hospital practices, said Otavio Berwanger, M.D., Ph.D., cardiologist and clinical epidemiologist at the Brazilian Clinical Research Institute, Sao Paulo, Brazil, and the study’s lead author. He suggested that the results would likely be applicable in many countries and healthcare environments. About 70 percent of the patients had never taken statins and about 30 percent had taken them previously or were on low-dose statins when they enrolled in the study. Patients who were already taking a maximum tolerated dose of statins were excluded.

Statins are a widely-used class of drugs that lower LDL, or “bad” cholesterol, thereby helping to prevent serious cardiovascular events in people at high risk for heart disease. In addition to their long-term preventive benefits, basic research suggests statins also may affect processes involved in inflammation and the formation of blood clots.

In this study, half of the participants were randomly assigned to receive two double (80 milligram) doses of atorvastatin—one shortly before the procedure and one within a day afterward. The other half received two doses of a placebo. Neither patients nor their doctors knew who had received the placebo. All patients then took 40 milligrams of atorvastatin daily for 30 days, which is standard practice after acute coronary syndrome.

“Although the trial is negative for our primary endpoint in the full study population, the findings of our prespecified analysis are very consistent with smaller trials and observational studies that suggest a reduction in events in the PCI population,” Berwanger said. “Viewed in the context of the literature, our study helps to confirm what has been shown before and suggests that it can be beneficial to consider giving a loading dose of a statin to patients who undergo PCI.”

“This study adds another piece to the puzzle,” Berwanger said. “I think it also opens the stage for testing other lipid-lowering agents that may have effects beyond lowering lipids.”

Researchers will continue to track outcomes for 12 months. In addition, the team is planning another trial focused on assessing potential benefits of statins and other drugs in patients undergoing PCI.