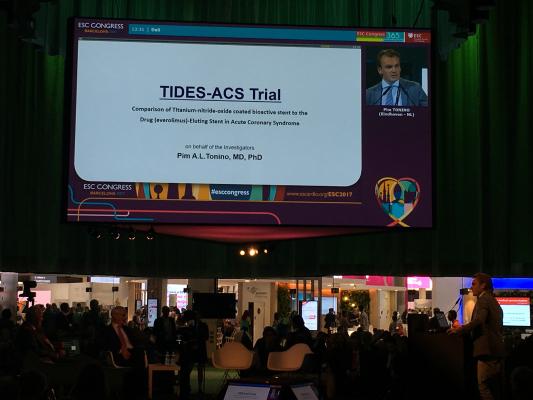 The presentation of the ESC late-breaker TIDES-ACS results show us that the Optimax stent is noninferior in patients with acute coronary syndrome compared to Synergy.

“When you look at the individual components of the primary endpoint in this study, the Optimax stent comes with a lower rate of cardiac death and myocardial infarction compared to Synergy, which is outbalanced by a higher rate of ischemia-driven target lesion revascularization for Optimax. In other words, with the Optimax stent hard clinical endpoints like myocardial infarction and cardiac death are less frequent in ACS patients than with Synergy, at the cost of a, probably less important, higher rate of repeat intervention,” Tonino said.

In conclusion, for patients presenting with ACS, cobalt-chromium-based TiNO-coated stents were noninferior to platinum-chromium-based bioabsorbable polymer EES for the primary composite of safety and efficacy outcome at 12-month follow-up.

“The TIDES-ACS trial is the first adequately powered head-to-head randomized comparison of contemporary bioactive stent technology with cutting-edge DES technology, in the setting of ACS. It provided sound evidence of non-inferiority of the former, compared with the latter, for the composite of hard safety and efficacy endpoints,” said the principal investigator of this study, Dr. Pasi Karjalainen, from the Heart Center, Satakunta Central Hospital, Pori, Finland. “Based on this solid premise, we can advocate the use of TiNO-coated Bio Active Stent (BAS) as a worthwhile alternative to DES in ACS. It is our aspiration that stents based on this bioactive technology will be embraced by the upcoming Practice Guideline committees, as a viable and valid option for PCI in ACS patients. » he continued.

Hexacath is an independent French company founded in 1994 which develops, manufactures and distributes innovative vascular therapy products such as BAS, bare metal stents (BMS) and various types of PTCA and PTA catheters for coronary and peripheral indications.