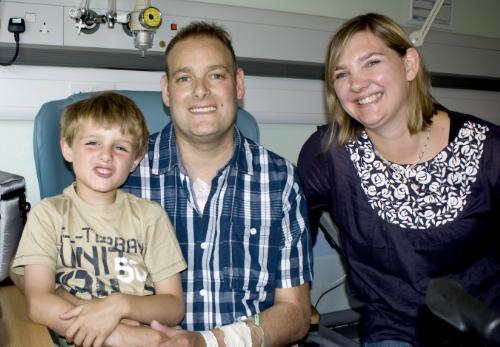 "Two years ago I was cycling nine miles to work and nine miles back every day, but by the time I was admitted to hospital, I was struggling to walk even a few yards," said patient Matthew Green. "I am really excited about going home and just being able to do the everyday things that I haven't been able to do for such a long time, such as playing in the garden with my son and cooking a meal for my family."

Green, 40, suffered from arrhythmogenic right ventricular cardiomyopathy (ARVC), a heart muscle disease resulting in arrhythmia, heart failure and sudden death. His health had been declining over recent years, with a heart transplant being his only option.

"Matthew's condition was deteriorating rapidly and we discussed with him the possibility of receiving this device, because without it he may not have survived the wait until a suitable donor heart could be found for him," said Steven Tsui, consultant cardiothoracic surgeon and director of the transplant service. "The operation went extremely well and Matthew has made an excellent recovery."

On June 9, Green became the first patient in the United Kingdom to receive the Total Artificial Heart. Two months later, he was discharged from the hospital using the Freedom portable driver. Weighing 13.5 pounds, including two onboard lithium-ion batteries, it is the world's first wearable portable driver designed to power the TAH both inside and outside the hospital. The driver is CE approved for use in Europe and undergoing a U.S. Food and Drug Administration (FDA)-approved investigational device exemption (IDE) clinical study in the United States.

Papworth Hospital is the first and only hospital in the UK certified to implant the TAH. The hospital performed the UK's first heart transplant in 1979 and has been using mechanical devices to support patients with end-stage heart failure since the 1980s.