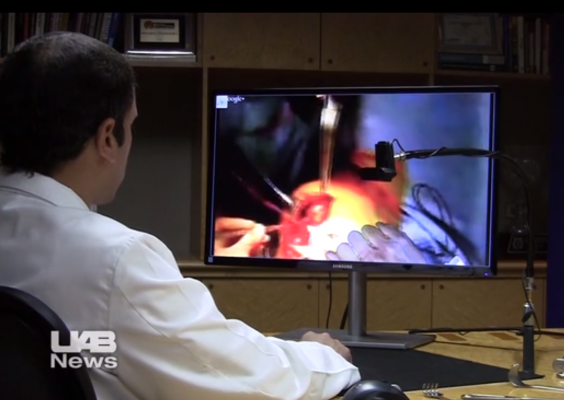 A remote physician points out features to surgeon during a live procedure.

December 30, 2013 — A University of Alabama at Birmingham surgical team has performed the first surgery using a virtual augmented reality technology called VIPAAR (Virtual Interactive Presence in Augmented Reality) in conjunction with Google Glass, a wearable computer with an optical head-mounted display. The combination of the two technologies could be a step toward the development of useful, practical telemedicine.
VIPAAR is a UAB-developed technology that provides real-time, two-way, interactive video conferencing.
Brent Ponce, M.D., orthopedic surgeon at UAB, performed a shoulder replacement surgery on Sept. 12, 2013, at UAB Highlands Hospital in Birmingham, Ala. Watching and interacting with Ponce via VIPAAR was Phani Dantuluri, M.D., from his office in Atlanta.
Ponce wore Google Glass during the operation. The built-in camera transmitted the image of the surgical field to Dantuluri. VIPAAR allowed Dantuluri, who saw on his computer monitor exactly what Ponce saw in the operating room, to introduce his hands into the virtual surgical field. Ponce saw Danturuli’s hands as a ghostly image in his heads-up display.
“It’s not unlike the line marking a first down that a television broadcast adds to the screen while televising a football game,” said Ponce. “You see the line, although it’s not really on the field. Using VIPAAR, a remote surgeon is able to put his or her hands into the surgical field and provide collaboration and assistance.”
The two surgeons were able to discuss the case in a truly interactive fashion, since Dantuluri could both watch Ponce perform the surgery and introduce his hands into Ponce’s view as if they were standing next to each other.
“It’s real time, real life, right there, as opposed to a Skype or video conference call which allows for dialogue back and forth, but is not really interactive,” said Ponce.
UAB physicians say this kind of technology could greatly enhance patient care by allowing a veteran surgeon to remotely provide valuable expertise to less experienced surgeons. VIPAAR owes its origins to UAB neurosurgeon Barton Guthrie, M.D., who some 10 years ago grew dissatisfied with the current state of telemedicine.
“So-called ‘telemedicine’ was little more than a telephone call between two physicians,” said Guthrie. “A surgeon in a small, regional hospital might call looking for guidance on a difficult procedure — one that perhaps I’d done a hundred times but he’d only done once or twice. How advantageous to the patient would it be if we could get our hands and instruments virtually into the field of a surgeon who has skills and training and lacks only experience?
“The paradigm of the telephone consultation is, ‘Do the best you can and send the patient to me when stable,’ while the paradigm with VIPAAR is, ‘Get me to the patient.’ Let’s get my expertise and experience to the physician on the front line, and I think we can implement that concept with these technologies,” Guthrie said.
Ponce says VIPAAR allows the remote physician to point out anatomy, provide guidance or even demonstrate the proper positioning of instruments. He says it could be an invaluable tool for teaching residents or helping surgeons first learning a new procedure.
“This system is able to provide that help from an expert who is not on site, guiding and teaching new skills while enhancing patient safety and outcomes,” said Ponce. “It provides a safety net to improve patient care by having that assistance from an expert who is not in the room.”
In 2003, Guthrie approached the Enabling Technology Laboratory in UAB’s mechanical engineering department, which was already at work on virtual, interactive technologies, with the idea of using two-way video to enhance surgery. The resulting technology became VIPAAR, now a start-up company at Innovation Depot, a technology business incubator partnered with UAB.
“VIPAAR brings experts or collaborators to the site of need, in any field where a visual collaboration would be beneficial,” said Drew Deaton, CEO, VIPAAR. “VIPAAR uses video on mobile devices to allow experts or collaborators to connect in real time and not only see what might need to be fixed, corrected or solved, but also be able to reach in, using tools or just their hands, and demonstrate. It’s like being there, side by side with someone when you might be a thousand miles, or 10,000 miles, away.”
Potential applications for VIPAAR go beyond medicine and surgery, according to Deaton. Field service is a burgeoning area, from a service call to fix a home heating system to keeping an industrial manufacturing process on line and running.
“When there is a breakdown, the time to respond and resolve an issue is critical in the field service world,” said Deaton. “VIPAAR is helping field service engineers solve problems as fast as possible and get their customers up to speed as fast as possible.”
Ponce and Dantuluri were pleased with the results of their interactive collaboration. Adjustments will be needed to fine tune the marriage between VIPAAR and Google Glass, but the promise of useful, practical telemedicine is drawing closer. Deaton calls it one more step on the technology evolutionary ladder.
“Today, you can’t imagine having a phone without the capability to take picture or a video,” he said. “I can’t imagine, five years from now, not being able to use a smartphone to connect to an expert to solve my problem. And have that person reach in and show me how to solve that problem, because the technology is advancing rapidly and we’re bringing this technology to market today.”
For more information: www.uab.edu, www.vipaar.com