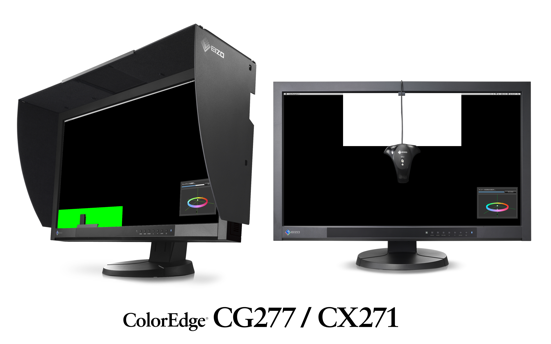 The ColorEdge CG277 is targeted at professionals requiring the most predictable color in their workflow. It features a sensor that is housed inside the monitor and swings up onto the screen for self-calibration. The ColorEdge CX271 is for professionals and prosumers in photography and design. It houses an internal correction sensor that maintains the calibration results after the monitor has been calibrated with an external sensor.

The ColorEdge CG277 and CX271 include the features of previous 27-inch ColorEdge monitors while offering a wide-gamut IPS (in-plane switching) panel that reproduces 99 percent of the Adobe RGB color space. In addition, dark tones retain their depth, even when the screen is viewed at an angle in a dimly lit photographic or post production studio. An LED backlight reduces power consumption by 40 percent and utilizes brightness modulation technology to minimize flickering and eye fatigue.

For brightness and color uniformity, Eizo uses its own digital uniformity equalizer (DUE) technology. DUE ensures a Delta-E difference of three or less across the screen. It also counterbalances the influences that a fluctuating ambient temperature may have on color temperature and brightness.

Eizo’s ColorNavigator calibration software comes bundled with both monitors. ColorNavigator is used for setting the target values for brightness, gamma and white point, and generating an ICC profile. ColorNavigator has a scheduling function that activates the self-calibration and self-correction functions of the ColorEdge CG277 and CX271 respectively. The software offers several advanced functions such as emulating the color characteristics of smart phones, tablets and other devices, and profile validation for verifying calibration results.

For video editing and post production, the ColorEdge CG277 has a 3-D LUT (look-up table) that adjusts color individually on an RGB cubic table. With ColorNavigator software’s emulation function, the 3-D LUT applies a film look to the image so creators can preview how the image will be seen by their audience. The ColorEdge CG277 comes with several media-standard preset color modes: Rec709, EBU, SMPTE-C and DCI. It also accepts 4K x 2K signals and downscales them to its native resolution of 2,,560 x 1,440.

The ColorEdge CG277 is recognized by Fogra as a Class A FograCert Softproof Monitor. Using the CG277 in a FograCert Softproofing System ensures designers, print specifiers and print producers can rely on the soft proof for predictable and consistent results.

ColorEdge CG277 and CX271 features include: 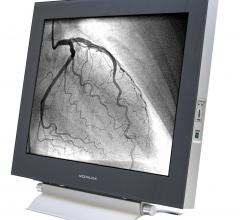 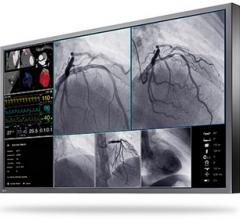 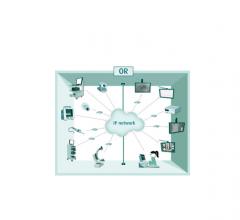 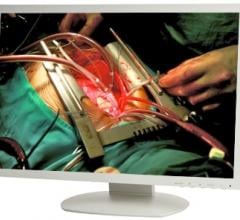