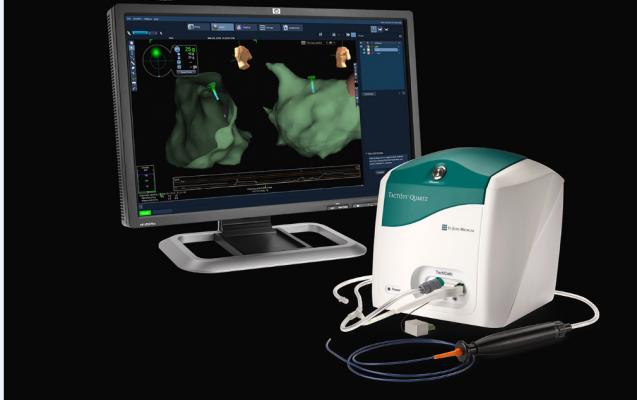 October 28, 2014 — St. Jude Medical Inc. today announced U.S. Food and Drug Administration (FDA) approval of its TactiCath Quartz irrigated ablation catheter, which gives physicians a real-time, objective measure of the force that the catheter applies to a patient’s heart wall during an ablation procedure. TactiCath Quartz contact-force technology was designed to provide physicians with more control to modify that force during ablation procedures in order to create more effective lesions for patients being treated for paroxysmal atrial fibrillation (AF). The technology is associated with a reduction in the rate of AF recurrence when optimal treatment measures are used.

“The number of patients with atrial fibrillation is growing rapidly in the United States,” said Vivek Reddy, M.D., director of electrophysiology at Mount Sinai Hospital, N.Y. “As the number of patients impacted by this disease continues to grow, it is important to develop treatment solutions that increase the efficiency and effectiveness of ablation therapies. TactiCath Quartz is an important advancement that provides critical information during ablation procedures.”

The TactiCath Quartz ablation catheter provides electrophysiologists the ability to monitor the amount of pressure that a catheter tip exerts on the endocardium (the layer of tissue that lines the chambers of the heart). Without contact-force sensing technology, physicians have to estimate by touch with their hands the amount of force applied to the heart wall during an ablation. If too little force is applied, effective lesions may not be created and AF may recur, potentially requiring additional treatments. When too much force is applied, there is a risk of tissue injury, which can lead to serious procedure-related complications.