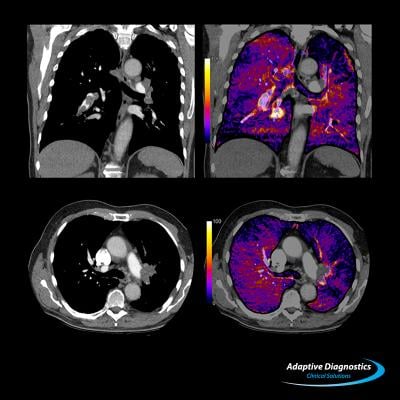 A pulmonary embolism visualized on a CTA scan using SureSubtraction software on a Toshiba Aquilion One Vision CT scanner.

Acute pulmonary embolism (PE) can pose a major treatment quandary for clinicians. While massive (high-risk) PE is increasingly recognized as a vascular emergency, submassive (intermediate-risk) PE is not clinically obvious. There also is a lack of guidelines for the evaluation and treatment of intermediate-risk PE, which comprises up to 30 percent of all PEs. We believe better care is delivered when a multidisciplinary team consults on PE treatment options.

Our 55-year-old patient, a urologist, waited until he was in extreme distress before driving himself to the emergency department (ED) at 11 p.m. While doing his normal evening workout at the gym, "Steve," who was in excellent cardiovascular condition, became extremely short of breath. Earlier in the day, he had two presyncopal episodes, which he tried to ignore by convincing himself he needed to exercise. When he arrived at the ED, Steve was visibly short of breath and told the ED physician that he thought he had a pulmonary embolism (PE). Steve had a hypercoagulable condition (prothrombin gene mutation) and a prior deep vein thrombosis (DVT). After consultation with his hematologist regarding his level of physical activity, Steve had stopped taking lifelong anticoagulants two weeks earlier.

Patients who present with obvious cardiovascular (CV) collapse are in the minority; most present with milder symptoms even though they may have a significant clot burden. The clot burden on pulmonary computed tomography angiography (CTA) does not allow a direct assessment of mortality risk. The key is to obtain as much objective information about the patient’s risk as soon as possible and to institute an appropriate treatment strategy. Patients who are experiencing significant right heart strain may be normotensive with normal oxygenation, so objective data including cardiac biomarkers and echocardiography are obtained.

Emergency Expertise From a PE Response Team
At our institution, we are part of a Pulmonary Embolism Response Team (PERT) that is activated for patients with high-risk or intermediate-risk PE to expedite diagnosis, risk stratification and treatment. The PERT — comprised of pulmonologists, critical care physicians, emergency medicine physicians, cardiologists, cardiovascular surgeons and interventional radiologists — makes evidence- and consensus-based recommendations.

High-risk patients, which comprise about 4 percent of all patients with PE,[1] are fairly easy to identify by their symptoms: significant hypotension, hypoxia, tachycardia and confusion. With a mortality rate of 15-65 percent,[2] these patients need emergency treatment. The standard of care is immediate administration of intravenous tissue plasminogen activator (tPA), but about one-quarter of patients have either relative or absolute contraindications to systemic fibrinolysis. For patients with high bleeding risk or those at immediate mortality risk, our approach is immediate removal of the central PE with percutaneous or surgical thrombectomy, followed by catheter-directed therapy (CDT).

After mechanically removing as much clot as possible from the main pulmonary arteries, we frequently employ ultrasound-assisted catheter-directed low-dose thrombolysis (EkoSonic Endovascular System) as adjunctive therapy to clear the peripheral pulmonary circulation. Ultrasound-facilitated catheter-directed fibrinolysis delivers 24 mg of tPA over 12 hours — less than one-fourth the dose of systemic lytics —thereby reducing the 3 percent risk of intracranial hemorrhage with full-dose lytics.

Patients with intermediate-risk PE, which confers a mortality range of 2-15 percent, have right heart strain without overt clinical symptoms. These patients are generally treated with standard anticoagulation, as the risk of intracranial hemorrhage with systemic fibrinolytics may outweigh the benefit of a likely reduction in PE mortality. The ULTIMA study, which randomized 58 patients with intermediate-risk PE to unfractionated heparin and low-dose USAT or to unfractionated heparin alone, found no evidence of major bleeding in the USAT group. Right heart strain denotes the presence of right ventricular dysfunction usually in the absence of an underlying cardiomyopathy. In assessing the extent of right heart strain, right ventricular/left ventricular (RV/LV) ratio is used, because mortality risk has been shown to increase stepwise with an increase in RV/LV ratio.[3] The ULTIMA study showed a mean decrease in RV/LV ratio from baseline to 24 hours was a substantial 0.3 ± 0.2 in the USAT group versus a non-significant reduction of 0.03 ± 0.16 in the patients who received heparin alone.[4]  In the SEATTLE II study, a prospective single-arm multicenter trial evaluating the safety and efficacy of USAT in 150 patients with acute high-risk and intermediate-risk PE, there were no intracranial hemorrhages and no fatal bleeding events. Major bleeds occurred in 17 patients: one severe and 16 moderate bleeds. The mean RV/LV ratio in the study decreased from 1.55 pre-procedure to 1.13 at 48 hours post-procedure, a substantial difference of 0.42.[5]

According to a recently published retrospective study of 45 patients with intermediate-risk PE who underwent USAT, the procedure was technically successful in 100 percent of the patients. Right ventricular dysfunction significantly improved, with mean RV/LV ratios decreasing from 1.59 to 0.93 and main systolic pulmonary artery pressure significantly decreased from 49.8 to 31.1 mmHg. (The RV/LV diameter ratio was used as a surrogate endpoint.) Among the group of 45 patients, there were four minor bleeding episodes at access sites and two major bleeding complications (flank and arm hematoma). The authors called for further studies to examine the long-term effects of USAT on mortality, exercise tolerance and pulmonary hypertension.[6]

The Ekos system delivers catheter-directed fibrinolytics with the aid of high-frequency, low-energy ultrasound, which allows penetration of the drug deeper into the clot. The ultrasound energy causes fibrin strands to thin and loosen and forces the drug deep into the clot, so less tPA is needed to clear the thrombus.

Watch a VIDEO demonstration of the Ekos system.

At this time, we believe that only selected patients should be considered for USAT.  This includes high-risk patients in whom systemic fibrinolysis is contraindicated. In this population, USAT is used as an adjunctive treatment after the central clot has been cleared. We also believe that USAT should be considered in intermediate-risk patients who are deemed to have a high risk of decompensation. This recommendation is reached by team consensus in patients with a high clot burden on CTA, elevated troponin and BNP, and an abnormal echo. The procedure does carry risks of systemic bleeding as well as that of damaging the pulmonary artery as we manipulate the catheters, a complication that can cause local hemorrhage and prevent the patient from receiving anticoagulants.

Not All Intermediate-Risk PEs are Equal
If patients with high-risk PEs are the easiest to identify, patients with intermediate-risk PE, like Steve, are the hardest. Although these patients may have a sufficient burden of thrombus to produce right heart strain, they are typically hemodynamically stable and oxygenating well. Objective testing is necessary to elucidate risk. Echocardiography shows evidence of right heart strain, and these patients have elevated levels of brain natriuretic peptide (BNP) and troponin. Traditionally patients with intermediate-risk PE have been treated with standard anticoagulation, but this group has a 3-15 percent risk of PE-related mortality.[7]  Societal and consensus guidelines have taken a conservative approach to intermediate-risk PE because of the wide range of mortality risk and the lack of Level 1 data.[8,9]  We approach each intermediate-risk patient individually, and we recommend the use of ultrasound-assisted thrombolysis based on a risk-benefit analysis and through consensus with the PERT team.

An Aggressive Lower-Risk Option for a Very Sick Physician
There was immediate consensus from our PERT that Steve could benefit from USAT because of evidence of right heart strain and large clot burden in an otherwise healthy man. CTA showed extensive emboli in the right and left main pulmonary arteries, extending into the right upper, middle and lower lobe branches and into the left upper lobe branches. His troponin I test was positive at 0.39 ng/ml. The echocardiogram showed elevated right heart pressures and RV strain with an RV/LV ratio of 1.2. An RV/LV ratio greater than 0.9 is evidence of right heart strain. Steve subsequently had a lower extremity duplex ultrasound that showed acute clot in his posterior tibial veins in both the right and left lower extremity. Positive lower extremity duplex studies in patients with intermediate- or high-risk PE are predictive of a poorer outcome.

We took Steve to the cath lab and began the USAT procedure at 12:10 a.m., concluding approximately 13 hours later. Eighteen hours post-procedure, echocardiography showed that Steve's right ventricle had returned to normal size with normal systolic function. His peak pulmonary artery systolic pressure was 32 mmHg, which was only mildly elevated. Steve went home less than 36 hours after he came to the ED.

Ultimately, we hope to apply more objective criteria in determining which patients with intermediate-risk PE are good candidates for USAT. A national consortium led by Massachusetts General Hospital is currently developing a registry of PE patients to collect treatment and outcomes data, which will enable us to collaboratively establish guidelines to better risk-stratify patients and choose the best therapy to treat them.