Software is available to assess myocardial perfusion based from CT datasets, but evidence and reimbursement are lacking 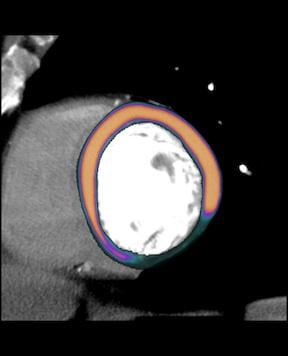 GE Healthcare image showing a myocardial perfusion overlay, based on contrast attenuation in the tissue, on its parent CT scan.

The next big advancement in cardiac imaging is likely to be computed tomography (CT) perfusion imaging. This enables one commonly available modality to image both the detailed anatomy and function of the heart at the same time. The impact on medicine could reduce healthcare costs by eliminating some hospital stays, cutting the number of tests and speeding patient diagnosis.

Patients presenting with chest pain in the emergency department often go through a series of diagnostic tests. This includes an electrocardiogram (ECG), followed by an enzyme test, then an echo or CT exam, then sometimes a nuclear stress test to look for perfusion defects in the myocardium. Patients are also sometimes referred for a diagnostic catheter angiogram.

In recent years, the proliferation of CT as a front-line imaging modality makes it available at most hospitals 24 hours a day. This is not the case with positron emission tomography (PET) or single-photon emission computed tomography (SPECT), which usually keep normal daytime hours. In many cases, chest pain patients referred for nuclear exams are admitted for an overnight stay so they can be closely monitored and undergo imaging first thing in the morning.  Nuclear tests also are frequently stretched over a period of two days for the rest and stress phases of the exam.

“CT is readily accessible in most hospitals, so there would be a huge decrease in the hospital length-of-stay,” said Guillaume Grousset, Siemens Healthcare product marketing manager for CT.

For these reasons, Grousset and many other CT experts said CT perfusion imaging could serve as a fast “one-stop-shop,” providing detailed anatomical images of any blockages and functional data showing their impact on blood flow. CT exams take about 20 minutes, potentially saving a large amount of time. In an era of reducing healthcare costs by streamlining operations, and reducing admissions and the number of tests to arrive at a diagnosis, CT appears to be an ideal solution.

“The particular attraction of CT for perfusion is you also get very good noninvasive assessment of the coronary arteries,” said U. Joseph Schoepf, M.D., professor of radiology and medicine at the Medical University of South Carolina (MUSC). He is an expert on CT angiography and heavily involved in CT perfusion research.  “You always need several modalities to get this information, but with CT you can get all this in one modality. With CT you can see the culprit artery, and that is a definite advantage.”

How CT Perfusion Works
CT cardiac exams use iodine contrast injections to enhance the blood. All the vendors that developed CT perfusion analysis software measure the amount of contrast present in the myocardium at various stages of the cardiac cycle. Contrast attenuation maps are created, which can be plotted on a bulls-eye or overlaid on anatomical, multi-planar images of the left ventricle. These color maps show the amount of iodine (and thus the amount of blood) in the tissue. Areas of low contrast attenuation match areas of poor perfusion due to ischemia or infarct, similar to the radiotracer sugar uptake by heart cells during nuclear exams.

The resulting images with the color overlay look very similar to PET perfusion scans, but with much better image resolution and anatomical detail. If an ischemic area is detected, the CT dataset can be used to immediately find the culprit lesion.

With 256- and 320-slice CT scanners, the entire heart can be captured at once. With lower-slice systems, especially the more common 64-slice scanners, the table must move into two positions, back and forth, over several seconds to obtain 10-15 datasets to create a complete cardiac cycle acquisition. These images must then be stitched together. “Real perfusion studies need to be dynamic to show the flow of blood – or contrast in this case – washing in and out of tissue,” Grousset said.

Early trials of the method showed excellent flow data, but came at a price in radiation dose. “The dose was not acceptable, because of imaging over 30 seconds and needing two tests for both rest and stress,” Grousset said.

He said dose could be around 40 mSv. However, newer scanners and reconstruction technology has reduced dose to about 18-20 mSv, which he said is comparable to SPECT.

CT Evolution Made Perfusion Possible
Cardiac CT has tremendous image quality in anatomical imaging. However, Grousset said it has only been the past few years, since the introduction of 64-slice systems about five years ago and higher-slice systems since, where functional imaging could be acquired by CT.  The technology has evolved so it can now quickly capture the moving heart and its blood flow. He said CT perfusion imaging is now one of the hottest trends brewing in cardiac imaging.

Vital Images gained FDA-clearance for its CT Myocardial Analysis software in late November. TeraRecon’s coronary review software is being marketed primarily to researchers so its abilities can be further validated.

Also at RSNA, Toshiba showed its version of myocardial perfusion software for the Aquilion One 320-slice CT scanner. The company said its system can image the entire heart in a single, split-second rotation, and can precisely identify ischemia with less radiation than PET/CT or SPECT imaging. To validate its claim, Toshiba-supported the CORE320 trial, which completed enrollment in September 2011.

The study compares the accuracy of CTA and CT myocardial perfusion to SPECT and catheter angiography.

Grousset said CT trials like this are very important to accumulate comparative effectiveness data. He explained CT is a relatively new modality for cardiac imaging and is still gaining acceptance in medicine. CT perfusion imaging is an even younger technology and still needs to be clinically validated, which could take years. Even if CT perfusion is proven to be as accurate as nuclear perfusion imaging, reimbursement may stall widespread acceptance.

“Until you get reimbursement, it will not become mainstream,” he said.

Effectiveness
“The sensitivity of CT perfusion has been near 100 percent, and it has a high negative predictive value,” Schoepf said, who uses dual-energy Definition Flash CT systems in his CT perfusion research.

Schoepf said the positive predictive value is in the mid-90s. CT often shows what looks like severe blockages, but when measured in diagnostic catheter angiography, do not turn out to be so bad. He explained this discrepancy is sometimes caused by severe calcification of the coronary vessels. However, the addition of perfusion imaging would help overcome this issue.

“Coronary computed tomography angiography (CCTA) is a no-brainer – who would not want a noninvasive test before you go to more invasive tests?” Schoepf said. “That integration of a one-stop-shop with CT perfusion is also a no-brainer.”

Nonetheless, he said more clinical evidence of its utility is needed and guidelines created for its use based on that data.

“I stood at the cradle of CCTA 10 years ago and the accumulation of evidence is breath-taking,” Schoepf said.  The majority of that evidence has only been generated since the introduction of 64-slice CT in 2006, and Schoepf said it is likely the speed of evidence gathering will be equally quick to show the effectiveness of CT perfusion. He predicts it will take five years before CT perfusion is used in mainstream medicine, first at teaching hospitals and later across the country if it is reimbursed.

Schoepf said vendors recognize the utility of CT perfusion and its potential impact on healthcare.

“These vendors are doing their research and they realize this is going to be something very significant in medicine,” Schoepf said. “You could create efficiencies in terms of time and healthcare costs.”

Watch a VIDEO on CT perfusion advances from SCCT 2015.