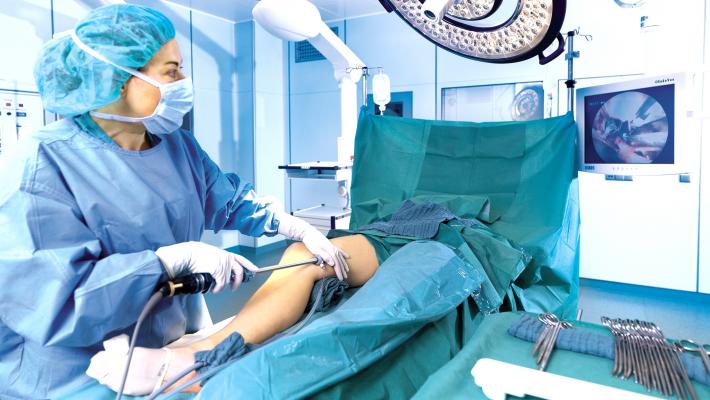 An endoscopic vein-graft harvesting for a CABG procedure. Image courtesy of Maquet. 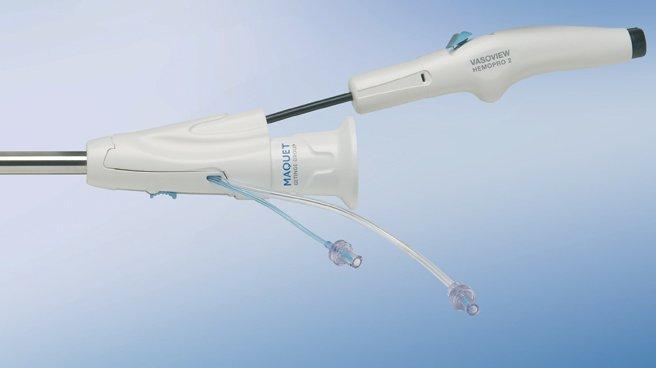 We are approaching 20 years since the introduction of endoscopic vein-graft harvesting (EVH) as a method of vessel harvesting for coronary artery bypass grafting (CABG), and two decades and more than 2 million procedures have justified EVH as the standard of care. Patients experience faster recoveries, better clinical outcomes and enhanced satisfaction. This is a review of the benefits and ongoing advances in the technology.

An open wound from the groin to the ankle is not a small matter. In fact, surgeons that performed CABG with open vessel harvesting (OVH) essentially needed a wound clinic in their office to take care of patients post-surgically. OVH was known to be a source of complications and discomfort, and later the scar was a point of embarrassment for many patients.[1] EVH has significantly reduced many of these issues. Analysis of controlled trials shows incidence of wound infection is eight times less with EVH as compared to OVH.[2] In addition, overall complications, infection and wound dehiscence are all significantly less common in EVH procedures versus OVH procedures. Clinical research presented at the 2014 European Association for Cardio-Thoracic Surgery (EACTS) Annual Congress in Milan found even more dramatic differences, stating EVH reduced leg wound issues to 4 percent, compared to 48 percent when an open wound technique is used.[3]

The improved wound outcomes undoubtedly contribute to the significant reduction in perceived pain that patients report. Davis and colleagues found that EVH patients reported 97 percent less pain at discharge and 67 percent less pain at six weeks post-operatively compared to OVH patients.[4] Similar positive outcomes have been seen in other studies.[5,6] Building on this, patients are then able to meet their ambulatory discharge goals an average of two days earlier.[6]

Multiple studies have shown overall reductions in hospital stays of more than one day for patients that undergo EVH as compared to OVH, and that the overall hospital readmission for wound complications drops from 16 percent to zero.[7,8] In addition to the benefits to the patient’s health, these improved outcomes lead to important economic benefits. The savings accrued from reduced hospital length of stay, additional supplies, clinician time for wound care and readmissions associated with wound complications more than offset the cost of EVH equipment.[7,8] One cost comparison of 99 EVH patients versus 128 OVH patients who underwent infrainguinal bypass with saphenous vein calculated in-hospital cost savings greater than $1,200 per patient, and a nearly 10-fold reduction in total readmission costs.[7] With healthcare payers moving to episode-based payments, this advantage will escalate in importance.[2]

While there were previously concerns about long-term patency of EVH, these doubts can be put to rest. An observational study of 325,394 Medicare patients undergoing isolated CABG compared the long-term outcomes of EVH versus OVH and found no increased rates of mortality with the EVH group. Additionally, the study associated EVH with lower harvest site wound complications relative to the open procedure.[8]

As with all surgical procedures, there is a learning curve. I have also found that choice of instruments and technique make a difference. Inflation of the vessel in preparation for harvesting is common, but I take caution to not over inflate by maintaining pressure at or below 150 mmHg so as not to compromise endothelial integrity. Once the vessel has been prepared, I examine the bands around the vein, which can decrease its patency. I remove these so that the vessel is very clean.
It is believed that technical advances that reduce thermal spread may further improve outcomes.[9] Efficiently removing the vein is essential to minimal thermal exposure. I have found that I achieve the greatest efficiency with the Vasoview Hemopro 2 (Maquet). First, it has the ability to cut and coagulate at the same time. In addition, the jaws are insulated, resulting in virtually zero thermal spread to the saphenous vein and radial artery on the concave side and less than 1 mm of thermal spread on the insulated portion of the convex side.

Finally, the Hemopro 2 employs spot cautery to maintain clear working tunnels and ensure hemostasis. An important characteristic of endoscopic procedures is that if you cannot see, you cannot work. The least amount of leakage in the surrounding vessels allows for the greatest visibility.

Just as we have adapted heart surgery to be the least invasive possible, we have adapted vein harvesting to minimize aggression and wounds and do no harm. Abundant clinical evidence shows that EVH improves clinical outcomes and patient satisfaction. Proper technique and the best tools available will ensure that EVH becomes the standard of care around the world.

Editor’s note: Saurabh D. Ashier is a certified physician’s assistant in the cardiothoracic surgery department at the Keck Medical Center of University of Southern California (USC) in Los Angeles.