Technology can help, but it’s not a magic cure. 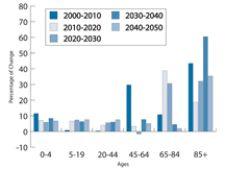 Figure 1 - As the demand for cardiology services is increasing, the supply has not kept pace. 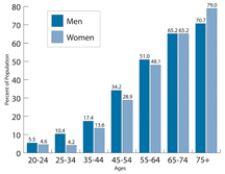 In 2006, the baby boom generation (those born from 1946 - 1964) started turning 60 at the rate of 330 per hour, according to the U.S. Census Bureau. By 2031, almost 60 million baby boomers will be over 65. See Figure 1.
Looking at the coming tsunami of seniors raises a lot of issues, especially in cardiology. Along with reaching their golden years, this generation will also be entering the peak cardiovascular disease years.

Cardiovascular disease remains the No. 1 cause of death in the U.S. Almost twice as many Americans die from cardiovascular disease than from cancer, the nation’s second leading cause of death. (CDC/NCHS 2001). The AHA publication, “Heart Disease and Stroke Statistics - 2004 Update” states that nearly 2,600 Americans die of CVD each day, an average of one death every 34 seconds.

“CVD claims more lives each year than the next five leading causes of death combined, which are cancer, chronic lower respiratory diseases, accidents, diabetes mellitus, and influenza and pneumonia,” the report continues.
Unfortunately, as the demand for cardiology services is increasing, the supply has not kept pace. As documented by Drs. Kereiakes and Willerson, among others, the current and ongoing shortage of trained cardiovascular specialists is due, in part, to a program in the mid 1990s that focused on limiting the cost of cardiac care by reducing the number of cardiology training programs and trainees.

The effect of reducing the number of cardiology fellowships remains with us today. Craig Walker, M.D., The Cardiovascular Institute of the South, reports that his group and “every key group in America is looking for additional cardiologists and is not able to find them.” The dwindling number of U.S. trained medical students entering cardiology programs had been somewhat offset by an increasing number of international school medical graduates. However, the change in immigration policies has now limited that source as well.

Can technology be employed to improve cardiologist productivity and help manage the enormous, oncoming wave of cardiovascular patients? All too often, it seems that new technologies manage to increase the burden of the practitioner.
But given the magnitude of the problem, increased productivity should be a primary requirement of new systems.

Many institutions have invested in a variety of cardiovascular information systems that will ultimately allow the cardiologist to work anywhere, providing access to diagnostic information and reporting tools. Network systems currently eliminate the time lost now by having cardiologists travel to where the information is stored, for example, in the cath lab or on a speciality workstation. One of the best examples of how technology can improve productivity is in the echocardiography laboratory.

For those echocardiographers who have made the switch to digital echo and reporting, there can be an associated bonus of decreased workload. Several labs have reported that reading and reporting time decreases substantially, usually by 30 percent. Gregory A. Rose, M.D., director, Cardiac Ultrasound Laboratory Sanger Clinic/Carolinas Medical Center Charlotte, NC, reports the experience of three busy labs in a white paper on ASE's (American Society of Echocardiography) Digital Zone.

After reviewing the reading and reporting processes in a digital lab, Dr. Rose found that “physician review time is decreased by five minutes per study: this translated to 25 full work days that are ‘given back’ to the physician,” assuming 2,500 studies per year. Digital labs have found productivity improvements for sonographers as well since they spend much less time performing administrative chores. As the volumes increased by 100 percent, the corresponding increase in staff was 50 percent.

Not only is the travel time eliminated, but the reading and reporting time is reduced as well. Instead of “wading through all that tape,” the cardiologist can use the thumbnails to go right to the images that are germane. A normal echo study can be read and signed with just two clicks. Plus, access to priors is instant — no matter how old the study is. Older exams used to have VCR tapes stored in two off-site locations and could take as long as two days to retrieve.

Unfortunately, the digital experience in the cardiac catheterization laboratory has not been as encouraging to date. Access to prior exams is dramatically improved over the days when cardiologists waited while radiographic technologists prowled the basement hunting down a prior exam. However, the practice of a cardiologist reading a report printed from a hemodynamic system into a transcription system is all too common.

Another technology that has been touted as increasing physician efficiency is Cardiovascular CT. CVCT does not require a physician to perform the exam, and it is much faster than conventional angiograms of cardiovascular structure.

CVCT has been enthusiastically adopted by the physicians at The Cardiovascular Institute of the South. The group’s use of CT has grown from one 16-slice scanner three-and-a-half years ago to four 64-slice scanners today at four of its primary locations.
At this time, instead of diagnosing coronary disease, these scanners are employed in diagnosing peripheral disease. Dr. Walker says it has become the tool of choice for peripheral studies because “it uses less dye, is noninvasive, more accurate and less expensive than a conventional arteriogram.” In addition, he notes that CVCT has ancillary findings that one would not find in a conventional study — for example, a renal stenosis as part of a runoff exam.

And producing better results is not the only benefit. Unlike a conventional angiographic study, which requires 30 to 40 minutes of a physician’s time, a CVCT exam does not require a physician to actually do the exam — only to read it at his convenience.
Today, the cardiologists at The Cardiovascular Institute of the South find that coronaries make up only about 10 percent of the volume on their CT scanners. Given issues primarily with calcium artifacts and difficulty getting quality exams with arrhythmic patients, the group uses the scanner for coronaries on low motion bypass grafts and to screen out false positives from other tests on patients with low calcium scores and low heart rates.

Dr. Walker sees the potential for cardiac CT to become a large part of their practice when CVCT's temporal resolution improves, which should be the case with 256-slice scanners now on the horizon. Along with a safer exam will come improvement in cardiologist efficiency, similar to what the group currently experiences with peripheral CT exams.

It should also be noted that, just as in many other fields and industries, a large number of cardiologists are baby boomers themselves. 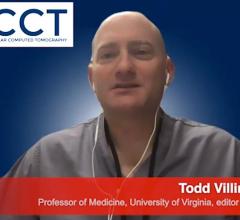 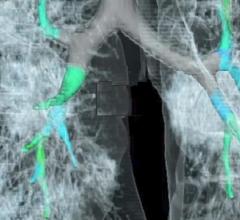 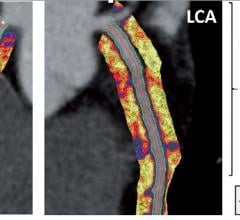 An example of perivascular fat attenuation index (FAI) imaging inside the coronary vascular wall to show areas of inflammation. The technology was created by Oxford University and several experts in cardiac CT imaging say this might be a game changer to improving risk assessments. 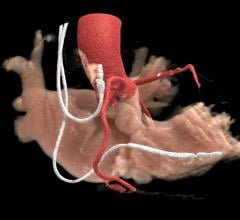 A cardiac CT of a patient with pacemaker leads, which can be challenging to get good images due to metal artifact. This image was rendered from using Canon's AiCE AI-assisted interactive reconstruction with Global Illumination 3-D rendering from a scan on an Aquilion One Genesis SP system. 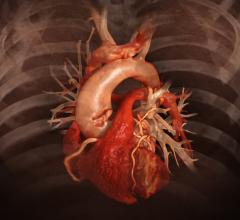